You Gotta Have Faith… Right?

As its title might lead you to expect, “The God Complex” offers a fair amount of grist for a sci-fi Christian’s theological mill. The minotaur-like monster at the episode’s center  preys on people of faith: not only conventional religious faith (Rita, winsomely portrayed by Amara Karan, seems to be the first professing Muslim character in Doctor Who, or at least the first to be portrayed in a positive light) but also faith in luck, crazy conspiracy theories, or even certain Time Lords of our acquaintance.

As survival strategies go, it’s a pretty good one. Most everyone has faith in something or someone. Former Roman Catholic nun and popular religion author Karen Armstrong explains: “Homo sapiens is also Homo religiosus. As soon as we became recognizably human, men and women started to create religions. We are meaning-seeking creatures.” Our ongoing quest for meaning means the minotaur need never worry about it’s next meal.

Not all faiths are equally valid. Just ask the prophets of Baal (1 Kings 18), among other idolaters in Scripture. Augustine famously prayed, “Lord, you have made us for yourself, and our hearts are restless until they rest in you.” Everyone may be “religious” (even those who say they’re “just spiritual”), but Christians believe the only worthy object of trust and devotion is the God of Israel, most fully revealed in Jesus Christ. We’re all guilty at times of “limping with two different opinions” (1 Kings 18.21), hoping and trusting in idols of others’ or our own making. In the end, however, Christ calls and commands us to follow him, and him alone.

Were we trapped in the minotaur’s prison ship, of course, not even well-placed faith would spare us a grisly end. We would have seen our deepest fear; by God’s grace, we would have turned to our faith in Jesus; and the minotaur would still have fed on that faith, as it feeds on any other. We would have been saved for eternal life, but as for this life? Well, miracles don’t seem to happen in the Doctor’s universe; as he told Rory in “The Pandorica Opens,” “Nine hundred years and I’ve never seen one yet.” Real faith, however, doesn’t depend on miraculous escapes. I’m always impressed by Shadrach, Meshach, and Abednego’s defiant profession of faith when faced with the flames of Nebuchadnezzar’s furnace: “If our God whom we serve is able to deliver us… let him deliver us. But if not, be it known to you, O king, that we will not serve your gods” instead (Daniel 3.17-18).

Does this episode present faith in a positive or a negative light, or neither? Remember that the minotaur is as trapped as his victims. Like so many Doctor Who “monsters,” he is not evil, just instinctual. Even so, the refrain of those the minotaur possesses—“Praise him”—could be construed as a conscious parody of the language of the psalms. When Joe tells the others they are too “distracted” for the minotaur to come and get them, I think of Jesus’ gentle rebuke of Martha: “you are worried and distracted by many things” (Luke 10.41); and Joe’s mention of a room for everyone reminds me that Jesus promised “many mansions” in his Father’s house (John 14.2, KJV). Poor Howie’s effusive praise of the creature—“His love was a beacon that led me from darkness to light… Let his breath on my skin be the last thing I feel…”—could contain echoes of the Song of Solomon, often read as an allegory of human love for God, as well as many texts about conversion, especially 1 Peter 2.9. Add to this mix the fact that only Rory, whom we are told isn’t “superstitious or religious” (as though the two are equivalent), sees an exit. The Doctor declares that only a “secular and advanced” civilization could construct the prison ship, a tacit rejection of faith in favor of science and technology (as though the two are incompatible). Can an episode that depicts faith, including faith in God, as an Achilles’ heel really be neutral on the subject?

Confession is Good for the (Time Lord’s) Soul 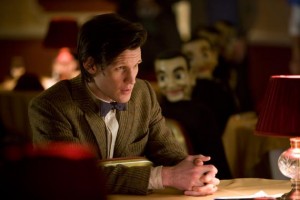 “Do not put your trust in princes,” the psalm-singer warns us, “in mortals, in whom there is no help” (Psalm 146.3). In “The God Complex,” Amy learns this lesson the hard way. I winced when the Doctor, immediately impressed with “right clever clogs” Rita, jokingly tells Amy, “You’re fired.” Remember, last week the Doctor was willing to lie to and sacrifice Amy-Then in order to save Amy-Now—the Amy he now “teasingly” threatens to replace with a fresher and, he insinuates, smarter companion? Ouch.

Amy’s profession of faith in the Doctor—“He’s never let me down”—only makes sense if she either doesn’t know about or is willing to overlook the way he let her future self down back at Two-Streams. (I suppose it’s still a factually true statement from Amy-Now’s perspective; however, I had trouble believing she’d say those words so easily and without irony if she knew the full story, as we viewers do.)

Fortunately, this week’s episode, while not a direct sequel to last week’s, does overlap with it at the crucial moment. When the minotaur charges into room 7, the Doctor comes clean with Amy—and with himself. “I took you with me because I was vain, because I wanted to be adored.” He is talking about whisking her away from Leadworth the night before her wedding, but he could also be talking about choosing Amy-Now over Amy-Then. As my wife pointed out while watching the episode, “He wanted young Amy because old Amy wouldn’t adore him.”

The Doctor continues, “I’m not a hero. I really am just a madman in a box.” What a perfect callback to his final line in “The Eleventh Hour.” He told Amy she needed to remember that fact because one day her life could depend upon it. Well, that day has come. What were once words of whimsy are now words of confession.

Whether we’re kneeling in the privacy of a booth, reciting a corporate penitential prayer in a congregation, or silently groaning in our hearts for grace, we Christians tend to think of “confession” as owning up to and asking forgiveness for our sins. We’re not wrong to do so. Jesus himself taught us to pray for God’s forgiveness (Matt. 6.12; Luke 11.4). I think the Doctor not only confesses his sins against Amy—“I stole your childhood, and now I’ve led you by the hand to your death”—but also resolves to go and sin no more by leaving Amy and Rory safe and sound. The open acknowledgment of our sin, however, occurs because confession is ultimately about telling the truth once we’ve seen it. We can only see and tell the truth about ourselves once we’ve seen and have told the truth about God: “in your light we see light” (Ps. 36.9b).

During the past two years, much of Doctor Who has been about seeing clearly. From spying Prisoner Zero out of the corner of one’s eye in “The Eleventh Hour,” to seeing the impossible truth in a glass of water in “The Beast Below,” to keeping a steady gaze on the Weeping Angels, to looking at a starry night in “Vincent and the Doctor,” to seeing past perception filters as recently as “Night Terrors,” to the “close-up of the Doctor’s eye as he peers through a peephole this week—all these cues call the audience’s attention to the importance of learning how to see the world and one’s place in it clearly. The Doctor’s confession marks the culmination (for now) of this theme. In his words to Amy, “It’s time we saw each other as we really are.”

The Doctor’s words mean the clear sight must be mutual. Amy sees the Doctor as he really is (not an infallible hero worthy of her ultimate faith), and the Doctor sees Amy as she really is: seven-year-old Amelia Pond, sitting on her suitcase. The shifts between Karen Gillan and Caitlin Blackwood during the scene drive this point home. Outward appearances aside, she hasn’t grown up. (Again: “I stole your childhood.”) If Amy is to survive this crisis—if she is to live—she must.

This episode’s moving conclusion took many fans by surprise, myself included. It’s been public knowledge for weeks that Karen Gillan will be back for series seven. What, then, do we make of Amy and Rory’s departure from the TARDIS?

Head writer Steven Moffat has said his version of Doctor Who is a “dark fairy tale.” The 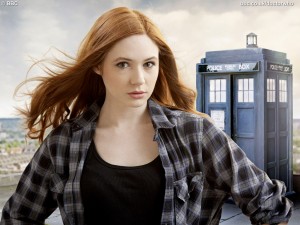 controversial but influential psychoanalyst Bruno Bettelheim argued in his book The Uses of Enchantment (1976) that adults tell children fairy tales (most of which contain plenty of darkness in their original, pre-Disney versions) in order to help them integrate the disparate parts of their pysche and grow up. Perhaps, then, Amy’s departure means she has grown up (or is well on the way to doing so).

The Doctor tells her, “It’s time to stop waiting”—for him. He calls her, for the first time, by her married name: “Amy Williams.” Name changes don’t happen lightly in literature—or in well-written television. While I would argue a mature Amy could easily keep her maiden name, I appreciate the thematic point being made: Amy needs to enter fully her adult life with Rory, and she can’t do so as the Doctor’s continuing companion. As the Doctor tells Amy outside that beautiful new house, “Maybe there’s an even bigger, scarier adventure waiting for you in there.”

The moment may also mark some growth on the Doctor’s part, too. He would prefer to keep “the glorious Pond” and, I think, even Rory, with him (watching the men’s friendship develop over time has been one of the joys of the Moffat era); but for Amy’s own emotional and developmental good (let alone her and Rory’s physical safety), he knows he must let her and her husband move on.

One important detail about that house, though: its front door is blue. TARDIS blue, in fact. I think that door’s color gives us hope that, unlike the last time she grew up (before the universe was rebooted), Amy has now grown up (or is growing up) in a way that won’t force her to leave those stories of “the raggedy doctor” completely behind. She will no longer be childish, but perhaps she can still be child-like.

Jesus calls his followers to live that way: “Truly I tell you, unless you change and become like children, you will never enter the kingdom of heaven” (Matt. 18.3). Jesus is speaking primarily about humility, an attitude of utter dependence upon God. But I think he’d also affirm the importance of traits we often associate with childhood today: imagination, wonder, delight in the world—all traits we’ve seen Amy exhibit during her time with the Doctor. Might that TARDIS-blue door mean that, even though Amy cannot remain with the Doctor, the positive aspects of her time with him will remain with—not childish things to be put away, but a pure, child-like part of who she is?