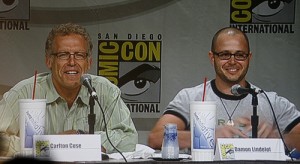 Earlier today Entertainment Weekly hosted a panel at Comic-Con called Totally Lost: One Year Later.  Jeff Jensen and Dan Snierson (both of whom I met at last year’s Lost Live: The Final Celebration) moderated the event, however two surprise guests showed up.  Although they claimed that 2010 would be their last year discussing LOST at Comic-Con for a while, Executive Producers Damon Lindelof and Carlton Cuse both appeared to discuss the conclusion of the show and answer fan questions.  In true Comic-Con fashion, Cuse came dressed as a Stormtrooper, and Lindelof wore a DHARMA jumpsuit with a Boba Fett helmet.

After years of being accused that they were making things up along the way, Darlton unveiled definitive proof that there was a plan in place all along.  In fact, if you follow the link below, you will see a deleted scene from LOST’s first season that proves that Damon and Carlton knew exactly how the show would ultimately end.

SPOILER ALERT!  If you haven’t seen all of LOST, do not watch the following video: