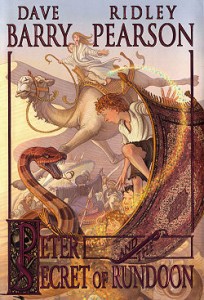 If you are looking for a good avenue to addict a child to the world of fantasy, Dave Barry and Ridley Pearson’s “Peter and the Starcatchers” series may be with you.  The series began with a question when Pearson’s daughter asked how Peter Pan met Captain Hook.  The two authors and friends brainstormed a possible answer which has now led to a five book series and a set of young reader chapter books based on supporting characters.  Overall these books are very satisfying giving even adult readers a quick paced light adventure perfect for summer reading.

In the first book, Peter and the Starcatchers, Barry and Pearson introduce us to a young orphan from Victorian England named Peter journeying by ship to a strange land.  While on this journey Peter finds himself in a struggle over cargo on the ship, a powdery substance called Starstuff.  Starstuff falls from the sky and mutates natural things, even giving humans unnatural powers.  Peter discovers there is a battle for the Starstuff between the Starcatchers who wish to return the powerful substance to the sky and the Others who collect the powder for their own power and glory.  In the midst of this struggle readers discover why Peter Pan can fly, Tinker Bell’s origins, why the Lost Boys and Hook’s pirates fight each other, and why one very large crocodile savors the taste of a dirty pirate over all other meals.  These books have a hook for young readers as it presents a world they are somewhat familiar with while answering questions they may have about that world in an interesting way.

So yes, these are a good fantasy read for both children and adults, but they also give us the opportunity to discuss spiritual themes.  In the third book, Peter and the Secret of Rundoon, one of The Others name Lord Ombra, explains to the Starcatchers what they do not know.  The struggle on earth is something bigger!  The struggle between the good guys and the villains is an extension of a larger battle between the sides of light and dark.  It is a battle with implications for all of existence and beyond the comprehension and notice of human beings.  In short, there is a battle beyond humankind that is going on all around us, and we barely notice it.

As one reads this fictional account it will strike as being more than a story but something that is true.  And it should.  Paul writes in Ephesians,

10 A final word: Be strong in the Lord and in his mighty power. 11 Put on all of God’s armor so that you will be able to stand firm against all strategies of the devil. 12 For we are not fighting against flesh-and-blood enemies, but against evil rulers and authorities of the unseen world, against mighty powers in this dark world, and against evil spirits in the heavenly places (Ephesians 6:10-12, NLT).

You see, it sounds true because it is true.  We are all engaged and immersed in a battle between forces we rarely see and have a difficult time comprehending.  And just like the battle Peter Pan finds himself in, this battle is for all of creation!  For Peter and his conflict against the Others the stakes are everything, really all of time and history.  The outcome for Peter is in question, but luckily for us we know how this struggle ends.  This provides us a great opportunity to discuss spiritual themes with kids and others interested in this story, and how we have come to know how the real invisible battle will end.

August 9th, Disney releases the fifth book in the series, The Bridge to Never Land.  In this installment the authors time shift us to present day and introduce us to new characters seeking Never Land.

Personally, I can’t wait to see if this latest chapter will continue to move forward the spiritual conversation.