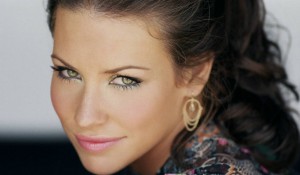 If you’re looking forward to director Peter Jackson’s adaptation of The Hobbit (I know I am), you likely already know that Evangeline Lilly, late of Lost, has been cast as an elf named Tauriel, a character not in the book. (Jackson says the name means “Daughter of Mirkwood”–can any specialists in Tolkien’s tongues verify that?) What I hadn’t heard is that Lilly, a self-professed fan of The Hobbit, thinks its lack of female characters makes it a “two-dimensional” work.

Lilly tells SFX magazine:  “I am very concerned to this day that people will watch the film and I’ll be the black mark on the film. I know how adamant the purists are and I’m one of them! That said, upon reading The Hobbit again, as an adult, I can see why additional characters were needed to round out the story as an adaptation–especially female characters! The Hobbit didn’t include female characters at all and was a very linear story, a book for children, really. What Peter, Fran [Walsh] and Philippa [Boyens] have done is all in perfect keeping with Tolkien’s world, while adding a third dimension to an otherwise very two-dimensional story.”

As I recall, Lilly is right: The Hobbit has no female characters (excepting Bilbo’s mother, mentioned in memoriam, “ 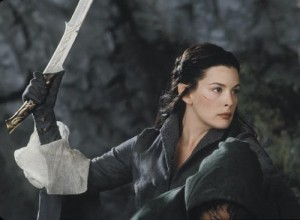 the fabulous Belladonna Took”). I like the way Jackson, Walsh, and Boyens enhanced women’s roles in The Lord of the Rings. (Ben made a strong point on the podcast recently about how Arwen’s on-screen actions at the Ford of Brunien diminish Frodo’s active struggle against evil; however, what’s at stake in that case is Frodo’s activity or passivity, irrespective of Arwen–or Glorfindel, for that matter.) I’m not even opposed to the invention of new characters, female or male, when books make the leap to the silver screen: the addition, subtraction, even conflation of characters, events, and settings is a necessary part of the adaptation process.

But I do take issue with Lilly’s conclusion that its lack of female characters, along with a supposed simplicity of plot and thought, leave The Hobbit a “very two-dimensional story.” The Hobbit is Bilbo Baggins’ story, and it is a fully realized, by-the-Joseph Campbell-book hero’s journey. We might wish Tolkien had included women characters, but their absence doesn’t make the story “two-dimensional” any more than a story with only female characters would be “two-dimensional” for not including any males. (At the same time, I’m conscious that my masculinity conditions my perspective; and the fact that I can’t think offhand of a story featuring only female characters says a lot about gender inequality in literature and film, especially in the fantasy and science fiction genres.)

But Lilly’s unquestioned assumption that The Hobbit is “a book for children, really” disappoints me more. On one level, yes, it is, but it’s also definitely a tale for grown-ups. When I first read noted literary critic and Tolkien biographer Humphrey Carpenter’s take on the book, I was amazed, but found myself nodding in agreement. The Hobbit, he argues, “shows the mark of [Tolkien’s] own experiences in the trenches in 1916, and could scarcely have been written before the First World War… The climax of the book is not the much hoped for killing of the dragon, which happens almost offstage from the main drama, but a contest for the treasure between those who ought to have been allies… As Bilbo himself remarks towards the end of the story, ‘This is a bitter adventure’… Tolkien is questioning the accepted ethics of children’s books, in the light of his own experience of the fruitlessness of conventional heroism in the trenches of a real war” (Carpenter, Secret Gardens: The Golden Age of Children’s Literature, Boston: Houghton Mifflin, 1985; p. 211).

I remain hopeful that Jackson and company will stay mindful of The Hobbit’s character as a “bitter adventure,” and will successfully bring that bitterness–as well as its many brighter aspects–to the screen. If they see fit to invent female characters to help them in that quest, by all means. Just don’t sell Tolkien’s story short as one for the kids alone.

4 comments on “A Middle-earth dearth of women?”