As Bleeding Cool first reported, in a story that has set the superhero blogosphere abuzz, The Comics Conspiracy, a local comic shop in Asheboro, North Carolina (and apparently the oldest LCS in the Tarheel State), is boycotting this week’s much-anticipated Action Comics #1 by Grant Morrison and Rags Morales–as well as the second issue and all other Morrison titles. Why? In one panel, the store’s owner claims, the all-new Man of Steel breaks an age-old commandment:

The letters are small and almost require super-vision to read, but there they are: “GD.” The owner reads them as shorthand for swearing.

What do you think? Is Superman taking the Lord’s name in vain? And if so, do you find this moment offensive?

I’ve not yet read the issue (I hope those who have will weigh in), but I do know this story is set early in Clark Kent’s superhero career. Perhaps this forceful explosion rattles him to such an extent that an equally forceful profanity escapes his lips. On the other hand, The Comics Conspiracy owner claims that nothing can justify Superman saying “GD.” Big Blue is supposed to be an “unblemished” “American icon.” (I wonder how he reacted to that citizenship story back in Action #900?) “This wasn’t creative flow. It wasn’t necessary in the story. It isn’t Superman at all. And it goes against a basic Christian principle… I understand that it’s only a comic and it’s not the real world, but I feel that as a Christian I have to draw the line somewhere.”

Most websites are making all kinds of merry with the story–for example, one commenter at the Escapist magazine forums remarks, “‘The Comics Conspiracy’ is run by nutters. Fancy that.” But aren’t there some real issues for Christians to consider?

I do applaud the shop owner for sticking to his Christian principles. I’m unsure, however, that this particular panel marks a battle worth fighting. Isn’t it exactly the kind of legalistic, moralistic stuff of which so many negative stereotypes about Christians are made? If I don’t see at least one late night comedian mocking The Comics Conspiracy next week, I’ll be surprised. On the other hand, faithfulness to God must take precedence over friendship with the world (James 4.4).

I also wonder whether The Comics Conspiracy refuses to carry other mainstream comic book titles, and how the owner discerns what he, as a Christian, can sell with a clear conscience. Did he, for instance, carry this summer’s Flashpoint tie-in miniseries “Batman: Knight of Vengeance?” It featured several disturbing pages of the Joker (whose identity in this alternate world, when revealed, proved equally disturbing) binding and threatening to torture two small children. I squirmed as I read the issues: this is what I was spending money on for my entertainment? And even a casual stroll past the covers of each Wednesday’s new releases at any LCS reveals any number of superheroines in provocative poses and “barely there” costumes. How does The Comics Conspiracy deal with such images, which are plainly visible as opposed to being tucked away on interior pages?

More broadly, do we as Christians need to think again about what “taking the Lord’s name in vain” really means? Is it simply shouting the words “God” or “Jesus” in a non-prayerful way? Or does abusing God’s name mean invoking God to support our own prejudices, our own pet political ideologies, or our own failures to love God and neighbor? I think of the prophet Jeremiah’s fiery sermon (well, most of his sermons were fiery, but this one in particular): “Will you steal, murder, commit adultery, swear falsely, make offerings to Baal, and go after other gods that you have not known, and then come and stand before me in this house, which is called by my name, and say, ‘We are safe!’–only to go on doing all these abominations?” (Jeremiah 7.9-10). Isn’t that taking the Lord’s name in vain? 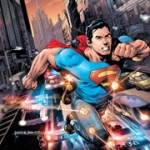 Perhaps James’ warning holds as true for Kryptonians as for us Earthlings: perhaps not even a hero who can bend steel and change the course of mighty rivers can tame the tongue, for it is “a restless evil, full of deadly poison” (James 3.8). All the more reason for Christians to choose how we respond with care, and to guard our own words first before criticizing the words of others.