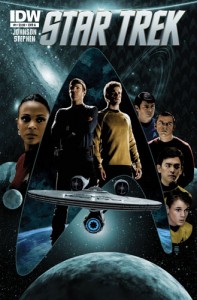 With all the hoopla surrounding DC’s launch of its “New 52,” another comics relaunch taking place this month isn’t attracting much attention. One might even say it’s as though this book were flying while cloaked—but Starfleet foreswore the use of cloaking devices, right?

Even in the new Star Trek continuity set up by director J.J. Abrams’ 2009 blockbuster?

We’ll find out if and when IDW’s new Star Trek comic ($3.99, monthly) works its way up to “The Enterprise Incident.” This book’s ongoing mission: to explore familiar plot lines from the original 1966-69 television series, but within the alternate reality established by the fast-paced, lens-flare-ful movie that, at least for now, has made Star Trek cool again in mainstream eyes.

I’ve been a Trekkie (claim the name!) since 1986, so my primary loyalty will always lie with Shatner’s Kirk, Nimoy’s Spock, Kelley’s McCoy, and the rest of the original cast. I do, however, think Abrams’ film is the best thing to happen to the franchise since Patrick Stewart. I enjoy every minute of the movie, and appreciate the clever way it achieved all the practical benefits of a pure “reboot” without, in fact, being one. At last, Star Trek has a mostly clean slate, keeping only the essentials of the Enterprise and her most iconic crew, free to entertain, enlighten, and surprise us in entirely new ways.

IDW’s decision, then, to revisit classic episodes could seem odd. Granted, as Zachary Quinto’s Spock explained in the movie to both his shipmates and the audience, the divergent timeline set into motion by Nero (or, as Scotty calls him in issue #1, “the Romulan with the pointy ship”) holds no guarantees that we know the future. The new IDW book could be seen as standing in the tradition of the beloved “Elseworlds” and “What If?” imprints from DC and Marvel, or even the “Infinities” line from Dark Horse’s Star Wars.

But…  if you could do something really new with Star Trek, why in the Great Bird’s name wouldn’t you?

Perhaps because the movie’s creative team, understandably, wants to reserve all the really new stuff for future films. The crediting of the movie’s co-writer, Robert Orci, as “creative consultant” suggests that possibility.

And, perhaps, because of fans like me. To paraphrase Sarek in Star Trek III: forgive us, but our logic is uncertain where this franchise is concerned. I could have chosen not to spend my money on this book. For weeks, I thought I wouldn’t. But when I saw it on the shelf at my local comic shop, and when I thought, “You know, I really liked the new movie, and I really like that old episode…,” I decided resistance was futile.

But have I been assimilated?

The first issue (written by Mike Johnson, drawn by Stephen Molnar) adapts the original series’ second pilot episode (and William Shatner’s first), “Where No Man Has Gone Before,” for Star Trek’s new reality. It sticks surprisingly close to the original, right down to the inclusion of a Gary Mitchell who looks like actor Gary Lockwood. (The new Lee Kelso, however, looks nothing like Paul Carr.)

As seen on TV, the Enterprise runs up against a nasty force field at the edge of our galaxy, and the psychically gifted Mitchell starts developing extraordinary powers, from speed reading to telekinesis. And, as seen on TV, Spock recommends that Kirk either abandon Mitchell on Delta Vega (which may or may not be the same Delta Vega to which Spock punted Kirk in the movie) or “kill him while [he] still can.”

As my parentheticals above suggest, there are actual and potential differences. Most of them are slight and unremarkable; one that did amuse me was the revelation that, in this version of events, Elizabeth Dehner isn’t aboard because of some unresolved business with Dr. McCoy: “It was a long time ago. I thought she’d forgiven me.” And, in fairness, this is part one of a two-part story (issue #3 will reimagine “The Galileo Seven”). I checked my initial disappointment when I again took Spock’s lesson in temporal paradoxes to heart: just because I know what happened to Gary Mitchell then doesn’t mean I know what will happen to him now. And Dr. Dehner’s absence makes room for a possibly quite “fascinating” deviation. If this Gary Mitchell is to have a romantic relationship with a similarly super-endowed female—and nothing dictates that he must follow that precedent, but if he does—the only woman we see affected by the power at the galactic barrier is none other than Lieutenant Uhura. She tells a concerned Spock (remember, they’re an item in the new continuity) that she’s fine—but Dr. Dehner said the same thing, at first. Her superhuman abilities simply took longer to manifest themselves. Issue #2 might offer an exciting variation on that theme.

Reserving final judgment on the story as a whole, then, I will commend the book for the flashes it gives us of these “same but different” characters. Best of all is the opening log entry Scotty dictates as he and his exotic alien assistant work to repair left-over damage from the film: the distracted chief engineer struggles to remember the stardate before asking, “Does anyone actually listen to these things?” And throughout, Molnar does a first-rate job of capturing the new cast’s likenesses. Even though the pacing and, quite often, the words of the script mimic the original, I still felt as though I were watching the new crew on screen. In that regard, the book feels fresher than it actually is.

I don’t know whether I’ll keep this title on my pull list past the next issue. I want to see just how far from the source material the book is willing to go. For my quatloos, the farther, the better. It’s a brand new Star Trek universe, after all; as Captain Picard once said of the old one, “Let’s see what’s out there!”