There are two strong Halloween memories that resound in my mind. First, the church I attended when I was a kid had an annual “Fall Festival” (it just happened to involve candy and occurred on October 31, but no relation to Halloween… I promise… *rolling eyes*). One year, I was playing basketball because I thought I was tough after going to a Dr. James Dobson Basketball Camp for kids from broken homes. I slipped on some ice and got a concussion. Second, my mom made me a god-awful jack-o-lantern costume in second grade that required me to wear green tights, a large orange pumpkin thing she sewed, and a hat that looked like the top of a pumpkin, leaves and all. 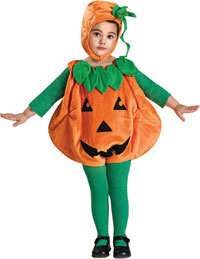 About this bad, but I was a boy in 2nd grade.

To this day, I sincerely believe my mom wanted me to get beat by the bullies. To help replace those memories, allow me to share my favorite scary/Halloween movie, book, and video game. 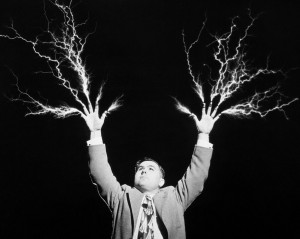 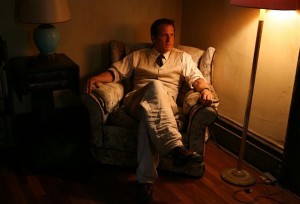 At first glance, this movie seems like it would be a horrible exorcism movie that has little to no regard for the Bible. I expected that it would be chalk-full of bad theology and exaggerations of Catholic dogma, but Brian Godawa, a Christian screenwriter that I greatly respect, recommended the movie. I tested it out, and I was pleasantly surprised. The film is a footage-found movie much like Paranormal Activity, Blair Witch, Cloverfield, or any other movie that features the found footage of a missing or dead film crew. The film follows a man that claims to be a preacher by the name of Cotton Marcus. Marcus comes from a long line of preachers and religious leaders, but he does not have faith. Instead of coming clean and pursuing his own destiny, he settles to fake his faith and trick people into thinking he is a spiritual man. He is even convinced that he is doing good for the people he encounters. He decided to allow a crew to do a documentary on him as he goes around and “casts out demons,” which he believes are just a psychological problem. Then things start to get interesting when a rural farmer calls him to assist with a girl that seems to be oppressed. Soon, he finds himself in way over this head.

The moral of the story is crystal-clear even if your theology doesn’t include such beliefs of modern exorcisms: bad theology and false faith are deadly and terrifying. I watched the film with a few of my friends that are not into movies like this, and they loved it. The last five minutes can almost ruin the film, but I recommend the film if you are able to handle it. Check out Brian Godawa’s review of the film here. 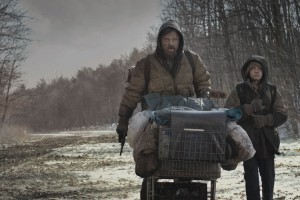 Book: The Road by Cormac McCarthy

A while back, I received a gift card to Borders Bookstore (R.I.P.). As one that didn’t read much fiction at the time (thank you, Bible school), I wanted to immerse myself in a good story, but didn’t know where to start. I ended up finding The Road by Cormac McCarthy. What drew me to this book was reading that they were going to a release a movie, and I love Post-Apocalypse stories to a point that it is a bit unnerving. I read the book quickly. It was a shorter book and very easy to read. Honestly, I don’t have the best reading skills (I’m a bit dyslexic), and I get quickly annoyed by authors that strain too hard to speak poetically. McCarthy reads like a poem, but there wasn’t a moment in the entire book that I felt he was hyper-poetic. Just plain-out amazing writing.

Let me clarify something for you. This is not a Post-Apocalyptic story. This is a story that happens to take place in a Post-Apocalyptic America. In fact, McCarthy never reveals what happened to put America is in ruins. The man in the story has a son, who is all he has left in the world. He protects his son at all costs as they move south, where it is warmer. During this time, they must fight against the elements, hunger, and cannibals. Everything in the world dissolves to nothing but a handful of survivors. Consequently, this powerful story dissolves to nothing but the relationship between the father and his young son. Trust me; read this book. My wife read it in one day. As for the movie, it is wonderful as well and has an amazing soundtrack by Nick Cave and Warren Ellis.

Speaking of music, this song by the Editors was no doubt inspired by the book . 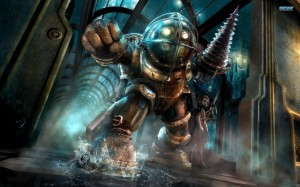 It is necessary to understand that I have been coming to terms with my geekiness within the last year or so. Therefore, a few things that are “old news” to others, I am finding new and exciting. For example, the storyline captured me in the first Bioshock game that I found used and on-sale at GameStop for 9.99. It wasn’t long before I think my wife was sick of hearing about it. A man survives a plane crash over the ocean. He swims to a structure where he finds a submersible that takes him to Rapture, an under-water utopian society that went hellishly bad. The citizens of Rapture lived cooped up under the ocean for decades. Nearly all of them have become junkies to a drug that give powers over the elements such as electricity, fire, ice, and other things (think of X-Men crazy and hooked on coke). Did I mention that the drug that everyone wants has been hidden in a group of glowing-eyed little girls that are protected by their very own “Big Daddy,” which is a man in a large machine-looking deep-sea diving suit armed with weapons and explosives? You can choose your own morality by either saving the girls’ lives or harvesting their life to get all of their power.

The second Bioshock also takes place in Rapture, but you are a “Big Daddy” searching for the girl you were to protect. The third Bioshock that is coming out the end of next year will take place up in the air instead of under the ocean. The storylines for these games are very deep and rich. There is a whole wiki devoted to it and an official novel based on the game. In fact, if IMDB is correct, it seems there may be a movie in the works for 2013 . Be warned: the games are a bit scary, violent, and a bit vulgar.