The day before Halloween is, unfortunately, an excuse to make mischief (or worse) in some places. The only mischief-makers you’ll find here are accomplished storytellers, interested only in playing pranks on our imagination…

The 1980s revival of The Twilight Zone doesn’t always get a lot of love, but when it premiered, it excited a lot of the classic series’ fans, including me. I fired up the VCR (remember those?) to catch every episode. It also attracted a lot of top talent, including both the writer and the director of “The Shadow Man” (originally aired November 29, 1985). Both men were near the beginning of their careers. Dante had helmed The Howling and had already taken one trip into the Twilight Zone; he directed the third segment of the 1983 film. O’Bannon, the series’ story editor, would later write Alien Nation and create Farscape.

“The Shadow Man” perfectly captures The Twilight Zone’s essence. It’s a morality play with fangs. Danny (played by Jonathan Ward) is a geeky teen with glasses who doesn’t have many friends, gets picked on by bullies, and who pines for a pretty girl who’s out of his league. (Gee, wonder why I could relate?) One night, a mysterious figure slides out from under Danny’s bed and announces, “I am the Shadow Man, and I will never harm the person under whose bed I live.” He then slinks out into the darkness.

Over the next few days, several of Danny’s schoolmates meet an unfortunate end. No violence is shown on-screen, and details of their deaths are vague—it’s enough to know this creature is basically the boogey man and is, as such, contractually obligated to “get you.” Realizing that the Shadow Man’s promise to do no harm gives him an advantage, Danny starts staying out late at night, despite the fear gripping the rest of his neighborhood. His “bravery” makes him the most popular kid at school, and even wins him the affectionate attention of his crush.

Of course, this being The Twilight Zone, you know Danny’s days as Big Man on Campus can’t end well. He’s heading for a signature Twilight Zone twist…

“The Shadow Man” is the kind of ghost story that would be perfect around the campfire: a fun and spooky cautionary tale about getting too big for one’s britches.

As a kid, the only Batman I knew for the longest time was the campy Adam West version. Then I met the Man-Bat, and I saw Batman and his world in a whole new light—ironically enough, since “Challenge of the Man-Bat” is a fairly dark story, visually and thematically.

Kirk Langstrom is a scientist trying to develop a serum that will give him a bat’s “sonar-detection,” “a natural ability even the great Batman doesn’t possess.” Langstrom gets more than that, however: he literally becomes a “man-bat.” The concept sounds ridiculous, but the striking and dramatic art of Neal Adams, one of the medium’s true masters, makes it a truly horrifying prospect, one no reader would wish to share. Readers share Batman’s shocked fascination when the two come face-to-face on the story’s final page, and are left wondering what will become of this self-made monster.

For someone who’d only ever seen Batman go up against Caesar Romero’s slapstick Joker or Burgess Meredith’s squawking Penguin with the old “biff,” “bam,” and “pow” routine, Man-Bat was a revelation. Man-Bat wasn’t funny; he was a freak—and the tragedy was, he knew it. Later
stories established that Langstrom could shift back and forth between his natural and altered states, but this story gives no hint of that possibility. He is, at this point, a Dr. Jekyll forever trapped as Mr. Hyde. 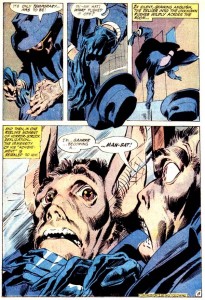 Man-Bat debuted two years before I did, so I learned of him, not through this issue, but through Power Records’ “Robin Meets Man-Bat,” a comic book dramatized by a full cast on the accompanying vinyl 45 (remember those?). The story included a recap of Man-Bat’s origin. I found it chilling and engrossing, and still do.

H.G. Wells’ 1898 “scientific romance” chronicling the conquest of Earth “by intelligences greater than man’s and yet as mortal as his own” has been adapted into many media, but no version matches the boldness and bravura of the Mercury Theatre on the Air’s historic broadcast.

Since I first heard this magnificent broadcast on cassette (remember those?), I’ve been fascinated by how brilliant writing, pitch-perfect acting, and random chance combined to create the “Martian panic” 73 years ago tonight (even if reports of its magnitude have sometimes been exaggerated). One Halloween I came home from trick-or-treating and found a movie about the broadcast on TV: The Night That Panicked America (1975; a remake, it turns out, of a 1957 Westinghouse Studio One play with the more sonorous title, The Night America Trembled):

I hope it will get a legitimate video release some day.

For a few years, I lived about eight miles up US Route 1 from Grovers Mill itself! Why I never made a pilgrimage to go see the monument to the Martian landing, I don’t know; but I did smile to myself every time I drove past the Grovers Mill exit. Listening to Welles and company’s trick has been an annual Halloween treat for me for many years. If you’ve somehow managed to never hear this milestone broadcast, consider it tonight’s assigned entertainment!