When I was six, I had an unhappy run in with a haunted house that has forever created distaste in me for scary, scary rides and haunted houses.  The first time I went to Walt Disney World, my wife had to convince me that I would be okay riding the Haunted Mansion.  I’m glad she was able to convince me, because there is no better way to celebrate Halloween than reflecting on the graveyard party of those celebrating spirits.  If you hear the graveyard crowd singing, “Grim Grinning Ghosts Come Out to Socialize” you can only be in one place: the fun, yet not overly scary Haunted Mansion. 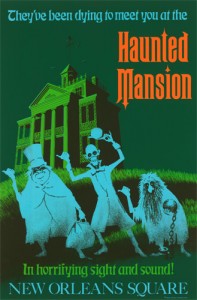 The original Haunted Mansion opened at Disneyland in 1969.  The notion of adding a haunted house to the theme park was Walt Disney’s and it was originated even before the park opened in 1955.  However, it took years of development and the contributions of Imagineering legends Ken Anderson, Rolly Crump, Yale Gracey, X. Atencio, Claude Coats, and Marc Davis to design and implement this ride, which was originally slated as a walk through attraction.  The delivered Haunted Mansion had guests riding through the home of 999 ghosts on Doom Buggies which take the audience through scenes of the supernatural.  The mansion is a combination of spooky as directed by Coats and funny as designed by Davis.  The séance, lead by the floating head of Madame Leota, the ballroom and banquet scene, and the hitchhiking ghosts are all crowd favorites. Of course, let’s not forget the graveyard filled with Davis’ puns as a chorus of ghosts sings the attraction’s theme song of “Grim Grinning Ghosts.”  These and many more thrills bring guests back again and again to experience this ghostly romp through a Haunted Mansion that has room for one more supernatural citizen…will you be the one to make an even 1,000?  The Haunted Mansion, even with its spooky segments, is simple fun and even those of us that are faint of heart can enjoy this ghostly celebration.  The Haunted Mansion exists in the Disneyland Resort, the Walt Disney World Resort, Tokyo Disneyland and Disneyland Paris as Phantom Manor.  Sadly, if you wish to celebrate Halloween at the original home to the mansion, Disneyland, it is often overrun by Jack Skellington from The Nightmare Before Christmas in the very popular, “Haunted Mansion Holiday” overlay. 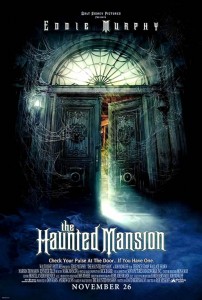 In the year 2003, two Disney properties with Davis and Coats influences were released as major motion pictures.  One of them, Pirates of the Caribbean: The Curse of the Black Pearl, became an international success and launched a highly profitable movie franchise.  The other, The Haunted Mansion, though financially profitable was jeered at as a failure.  In this adaptation of the classic ride, Eddie Murphy stars as realtor Jim Evers.  Evers is called to Gracey manor, a tribute to Imagineer Yale Gracey, as a possible property for him to represent.  However, Master Edward Gracey has secretive plans for Evers’ wife, Sara.  The audience follows Evers and his children through the haunted Gracey manor to unravel the mystery of the estate and the importance of Mrs. Evers.  While the movie itself, is far from a Christopher Nolan production, it does attempt to capture the fun of the Disney attraction.  Madame Leota, portrayed by the floating head of Jennifer Tilly, shows us more of Leota than guests see in the ride itself.  Plus, viewers will see other great tributes to the ride, including the hitchhiking ghosts, a busy graveyard, the singing busts, and many more.  So, despite critical reactions, the movie can help provide a fun and thoughtless Halloween with references to the original Haunted Mansion.  In July 2010, Disney announced a new Haunted Mansion movie project to be helmed by Guillermo del Toro.  He stated  that the Hatbox Ghost, a beloved and rarely seen character from the mansion, would have a key role in this future film.  This project has yet to emerge, but with a planned PG-13 rating and a director skilled at horror, Eddie Murphy’s take on the mansion is likely to be my preferred take on this ride. 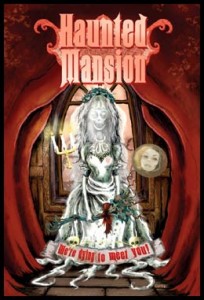 If you want something darker to remind you of your jaunt with grim grinning ghosts you may prefer the graphic novel, Haunted Mansion.  This comic is a collection of 17 short tales, paying tribute to the classic attraction.  The stories vary widely in content and visual presentations with 17 teams or individuals contributing to this collection.  Many of them make reference to the mansion as Gracey Manor, paying tribute again to Yale Gracey and the legend of that mansion’s namesake.  Additionally, every story draws on characters from the attraction and all occur in the mansion.  Characters that make multiple occurrences in this graphic novel include the mummy, the caretaker and his dog, Madame Leota, and the hitchhiking ghosts.  My personal favorite tale is “Blueprint for Murder,” which depicts the struggle between the mansion architects, Mr. Coats and Mr. Davis.  This story plays up on the real life personalities of Claude Coats and Marc Davis, with Coats stressing detail and Mr. Davis with flashy ideas.  The first story, “Room for a Thousand,” sets the tone by using the Ghost Host monologue to guide the story.  Haunted Mansion is fun and whimsical, but through the use of a variety of authors, I don’t feel that all of the tales were successes.  As a whole, it does well in honoring the mansion and giving us fans a laugh and a chuckle.

Happy Halloween!  May it be a safe and fun one, in which you do not fill the permanent occupancy of Walt Disney’s Haunted Mansion.

One comment on “The Sci-Fi Christian’s Tricks and Treats for October 31, 2011”