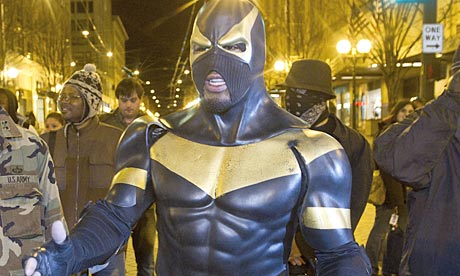 Remember that scene in The Dark Knight where a well-meaning but misguided group of Batman impersonators try to give the real Caped Crusader an assist? Recent news reports suggest such a scene may not be too far off the mark.

Last Thursday in Seattle, Phoenix Jones appeared in court. For the time being, he avoided charges stemming from his arrest on four counts of assaulting people with pepper spray while allegedly breaking up a wee-hours nightclub fight. He was, however, compelled by authorities to reveal the secret identity behind his black-and-gold mask.

Jones is now back on his anti-crime beat. He told the forty or so well-wishers watching him return to action to avoid endangering themselves if they encountered crime in progress; they should, he said, call 911 instead. Seattle police spokesman Mark Jamieson thinks Jones should follow his own advice: “If you see something that warrants calling 911, call 911. You don’t need to  dress up in a costume to do that.” 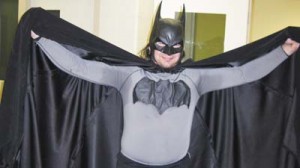 Meanwhile, in Michigan, the “Petoskey Batman” didn’t fare as well as his west coast counterpart. Mark Wayne Williams was sentenced on Monday to six months probation after his arrest in May for trespassing and possession of dangerous weapons. As he serves his sentence, he has been barred from wearing the Batman costume he dons to draw attention to such causes as crime prevention and helping the homeless. The arresting officers found numerous concealed weapons on Williams’ person, including folding steel bludgeons and sand-filled gloves. Williams maintains, however, he did not intend to use his utilities. “I’m not a violent person,” he says. (The fact that he was found hiding atop a building in order to get away from some pursuers may lend credence to that claim; but if you’re not going to use them, why carry them in the first place? Costume accessories?)

You may already know that neither the Petoskey Batman nor Phoenix Jones are alone. A legion of self-styled, real-world “superheroes” patrol their communities in cowls and capes (and, sometimes, bullet-proof vests). Some six hundred of them have registered at http://www.reallifesuperheroes.org/. What do you think about these self-appointed superheroes? Are they driven do-gooders who should be commended, or dangerous vigilantes who should be stopped for their own safety, let alone that of the public?

And what would Jesus think of their never-ending battles? During his earthly ministry, Jesus saw himself, in no small measure, as a defender of the defenseless. Think back to his inaugural sermon in Nazareth, where he “unmasked” himself as the subject of Isaiah’s ancient prophecy of a Spirit-empowered servant sent by God “to bring good news to the poor… to proclaim release to the captives and recovery of sight to the blind, to let the oppressed go free, to proclaim the year of the Lord’s favor” (Luke 4.18-19). Remember how he treated society’s most vulnerable members with compassion: feeding the hungry, healing the sick, saving a woman caught in adultery from a mob ready to stone her, reaching out to children whom his first-century society routinely discounted. The Petoskey Batman claims his main mission is to “make people pay attention to what’s going on in their community,” and it’s hard to believe Jesus, arguably the ultimate community activist, could find fault with that motivation–especially in communities wracked with crime, poverty, drug abuse, and other social evils.

On the other hand, Jesus didn’t wear a utility belt (or, for that matter, hockey pads). The only time he raised a weapon, he did so against corruption in his own religious tradition, in a highly symbolic action (Mark 11.15-17 and parallels), never against the civil authorities or his fellow human beings. He warned Peter in Gethsemane that “all who take the sword will perish by the sword” (Matt. 26.52), even if taking the sword in an effort to combat evil. “Do not resist an evildoer,” he preached (Matt. 5.39); and the apostle Paul would preach in turn, “Do not be overcome by evil, but overcome evil with good” (Rom. 12.21). (Paul also taught, in Romans 13, that Christians have a responsibility to obey the civil authorities–so if they are advising us to call 911 rather than take matters into our own hands, perhaps we should follow through.) When Jesus sent out his followers to do his work, he sent them out “like sheep into the midst of wolves” (Matt. 10.16), taking nothing with them but a benediction of peace and the Good News. The Word of God, “living and active, sharper than any two-edged sword” (Heb. 4.12), is the only offensive weapon in the panoply of God (see Eph. 6.10-17).

What do you think? Would Jesus cheer for Phoenix Jones? Jones told the press, “I decided to make a difference.” Would Jesus approve of how he and his fellow heroes go about making that difference? Or would he call them to make that difference… differently?

Note: If you’d like to explore these themes further, check out The Sci-Fi Christian podcast, episode 3, “The Dark Knight on Trial,” where Matt and Ben evaluate Batman’s war on crime from various biblical perspectives.

(Photo of the Petoskey Batman by AP Photo/Petoskey Department of Public Safety via Petoskey News-Review; http://thegazette.com/2011/10/18/man-dressed-as-batman-ordered-not-to-wear-costume/)