Next month, Sotheby’s London will put on the auction block a manuscript the future author of Jane Eyre (1847) penned while a teenager. Hailed as “the most important Brontë manuscript to have appeared at auction in more than thirty years,” the story it contains–“a colourful tale of murder and madness,” says Sotheby’s specialist Gabriel Heaton–takes place in what genre critics might today call the Brontë sisters’ “shared world” of Glass Town.

Inspired by toys–as so many inhabitants of children’s fantasy have been, from Hoffman’s Nutcracker Prince to Milne’s Winnie-the-Pooh–the principal characters of Glass Town  were soldiers who governed islands off the coast of an exotically idealized Africa, islands boasting (according to Brontë expert Michael J.A. Howe) “a rich range of people, places, events, and buildings, drawn partly from the children’s own experiences and partly from things they had read about in books and newspapers.”

Glass Town was a liminal setting for storytelling. It straddled the boundary between reality and make-believe. Like the imaginary Arabia of the Thousand and One Nights, Glass Town frequently brimmed with “magic and mystery.” One early adventure, for instance, featured “an Immense and terrible monster [whose] head touched the clouds [and] was encircled with a red and fiery Halo [and whose] nostrils flashed forth flames.” (Hmm… An exotic island on which lurks a smoky monster… Maybe Lost‘s last episode should have shown the passengers of Oceanic 815 not as congregants in a chapel, but as toys in the Brontë sisters’ bedroom!) 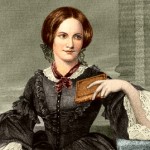 The manuscript to be auctioned is a tiny one: “more than 4000 words painstakingly crammed on to 19 pages, each measuring approximately 35 by 61 mm” (that’s about 1.38 by 2.4 inches for us metrically challenged Americans). But–not unlike a certain standby in much later British tales of the imagination–this mini-manuscript is definitely “bigger on the inside!” It not only offers a tantalizing glimpse into the developing mind and talent of one of the Victorian era’s most beloved writers, but also testifies to the importance of sparking young people’s imaginations by encouraging them to read. In creating Glass Town, Charlotte Brontë and her sisters took raw materials from their day’s popular travel and exploration narratives and transmuted them into what Charlotte herself, in one Glass Town tale, calls”the production of a mighty imagination.”

What isn’t imaginary is the manuscript’s high price. The lot is expected to realize somewhere between £200,000-300,000 ($321,900-482,850 USD at today’s exchange rates). Only in Glass Town or some even more far-fetched alternate universe could I afford such a purchase!