Today, many Roman Catholics and other Christians will remember Dorothy Day, who died on this date in 1980.

If you’re not overly familiar with her (as, I must admit, I was not), the following trailer for a documentary about her will give you a glimpse of her passion for social justice and peace, grounded in her faith in Jesus Christ:

Incidentally, this documentary’s title refers to Day’s own wishes that she never be canonized. “I don’t want to be dismissed so easily,” she said. It’s true: elevating someone to the stained-glass status of “saint” after death–whether formally, as in some Christian traditions, or informally–is perhaps the surest way to domesticate the powerful, even dangerous vision of holy living she or he embodied while living. “Oh,” we can tell ourselves, “that person was special. I could never hope to live out the Gospel like that.” Nonetheless, according to The Catholic Worker Movement’s online biography of its founder, “having herself treasured the memory and witness of many saints, [Day] is a candidate for inclusion in the calendar of saints.”

Dorothy Day’s challenge to the powers that be and her insistence that Jesus’ message matters to our world, particularly for the poor and oppressed, make her a modern Christian worthy of all believers’ attention, to whatever tradition they belong. Her politics and pacifism still sometimes provoke controversy, but I, at least, find it hard to disagree with her concern and care for “the least of these” (Matt. 25.40).

But what makes her of interest to sci-fi Christians? In no way do I intend to minimize or disrespect Dorothy Day’s work by observing the similarities between her and Edith Keeler, the 1930s New York social worker with whom Captain Kirk shared a star-crossed romance in “The City on the Edge of Forever,” which is ranked in poll after poll as the original series’ best and most popular episode.

I haven’t yet found an authoritative source to confirm my suspicion, but I wonder if Dorothy Day inspired Harlan Ellison to create the “angel” (as a cordrazine- and time-travel-addled Dr. McCoy calls her) whose commitment to fighting social inequality and world war means, in a cruel twist of fate, that she must die to preserve the timeline. Consider this description of the hospitality Day showed the Depression-era poor (again quoting The Catholic Worker website):

These weren’t the “deserving poor,” it was sometimes objected, but drunkards and good-for-nothings. A visiting social worker asked Day how long the “clients” were permitted to stay. “We let them stay forever,” Day answered with a fierce look in her eye. “They live with us, they die with us, and we give them a Christian burial. We pray for them after they are dead. Once they are taken in, they become members of the family. Or rather they always were members of the family. They are our brothers and sisters in Christ.”

Some justified their objections with biblical quotations. Didn’t Jesus say that the poor would be with us always? “Yes,” Day once replied, “but we are not content that there should be so many of them. The class structure is our making and by our consent, not God’s, and we must do what we can to change it. We are urging revolutionary change.” 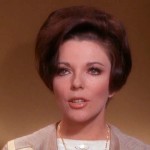 Edith Keeler (played, of course, by a pre-Dynasty Joan Collins) is no less fierce in her convictions; she is even called “Sister Edith Keeler” in the credits. In keeping with the secular humanism of Star Trek, however, her motivation doesn’t stem from any religious faith (at least, none that is articulated on-screen). The speech in which Keeler tells her clients why she does what she does is one of the most moving expressions of Gene Roddenberry’s optimistic philosophy of the future in the entire Star Trek canon:

“Let’s get one thing straight: I’m not a ‘do-gooder’… [and] I don’t pretend to tell you how to find happiness and love, when every day is a struggle to survive. But I do insist that you do survive, because the days and the years ahead are worth living for! One day soon, man is going to be able to harness incredible energy–maybe even the atom–energy that could ultimately hurl men to other worlds in some sort of spaceship. And the men that reach out into space will find ways to feed the hungry millions of the world, and to cure their diseases. They’ll be able to find a way to give each man hope and a common future. And those are the days worth living for.”

The Star Trek future is indeed a day “worth living for”–but I believe, as Christians, we must confess humanity cannot save itself. While we can and must improve this world for all people, and while we can and must contribute to “hope and a common future” for the human race’s immediate welfare and long-term survival, we can’t think that technological society, however advanced, is our ultimate hope. Our ultimate hope is only in the kingdom of God–the New Jerusalem that will descend to us as a gift from above (Rev. 21.2). The Advent season many Christians are currently observing reminds us to look forward with joy to the new heavens and the new earth, making our prayer, “Come, Lord Jesus!”

But, again, waiting for the full realization of God’s reign must not make us passive, content to live with the injustices and inequalities that plague society. Karl Barth, one of the 20th century’s most significant Protestant theologians, put it this way: “[L]ast things do not take place on earth, and yet why should not little things and even great things do so?” (Barth, The Theology of John Calvin, Eerdmans, 1995; p. 94).

So yes to feeding the hungry! Yes to curing disesase! And, yes (please!) to spaceships that hurl us to other worlds! Yes to Dorothy Day’s vision of faith expressed in works (James 2.14-17), and of welcoming the poor and the stranger as those in whom Jesus comes to us today. May we, as Christians, work toward these “little and even great things” in thanksgiving for the redemption God accomplished for us in Jesus, and in joyful anticipation of the complete redemption awaiting us and the cosmos when Christ comes again.

5 comments on “Was Edith Keeler the Dorothy Day of “Star Trek”?”