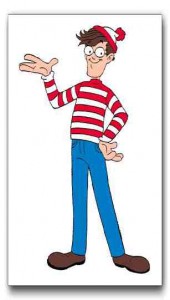 Attention, all Waldo-watchers! Keep your eyes peeled in the direction of your local movie theater!

MGM has purchased film rights to the iconic, bespectacled, candy-striped wanderer created by British illustrator Martin Handford in 1987. The character was called “Wally” back then–and still is, across the pond. We Yanks know him by a name that carries overtones of science fiction and science fact. Robert A. Heinlein’s 1942 short story “Waldo” starred an inventor by that name who devised remote-controlled mechanisms that could “extend the user’s natural abilities,” allowing him or her to “perform work in an inhospitable environment or at a distance” (Oxford Dictionary of Science Fiction). To this day, as you engineers out there know, such devices are called “waldoes.” (An image of Handford’s Waldo encased inside the “body-waldo,” or full-blown mechanical suit, worn by Heinlein’s soldiers in Starship Troopers would really bring things full circle. Get on that, photoshoppers!)

I’ve always thought Handford’s Waldo seemed engineered to extend–or, more truthfully, try–my patience. My son has been a Waldo fan for a long time. He can still spend hours poring over the oversized pages of the Waldo volumes, relishing every second as he strives to pick Waldo out of an impossibly populous, incredibly detailed crowd scene (it’s said Handford takes eight weeks to finish each scene–I believe it!). And even once he has found Waldo–or one of Waldo’s supporting cast (Wilma, Wendy, Woof the dog, and Odlaw–basically the “Bizzaro Waldo”)–my son isn’t satisfied. The back of each book presents a list of people and objects readers can go back to the beginning and hunt down.

“Come on, Dad!” he’ll say, after a half-hour finding Waldo in, say, a scene of a futuristic lunar colony. “Don’t you want to find the robot who’s planting petunias?”

“Um, no,” I’d say, rubbing my eyes. “Not really.” Were I a better father, I’d cherish each and every minute of our Waldo-watching. Father and son, bonding over a book: what could be better? But it just takes so long! And all the people in Handford’s painstakingly painted panoramas are so small! And what makes this Waldo guy so important that we’ve got to know where he is, anyway?

Thankfully, God the Father is a far better parent than any of us! God isn’t above taking the time needed to find each and every one of us. No one is small and unimportant in God’s eyes. Like the shepherd who can’t rest until that hundredth sheep is back safe in the fold; or like the woman who sweeps her house from top to bottom to find that tenth coin (Luke 15.1-10); God, “who is seated on high,” nevertheless “looks far down on the heavens and the earth,” strenusously searching for us, especially the poor in the dust and the needy in the ash heaps (Ps. 113.5-7). And lest we think that we, like Waldo, can slip away and get lost in the crowd, the psalm-singer reminds us that “even the darkness is not dark” to God, and “the night is as bright as the day” (Ps. 139.12).

Praise be to our patient and persistent God, who went so far as to enter the crazy crowd of humanity himself in Jesus Christ, all to find us, and, rejoicing, bring us home.

5 comments on ““Where’s Waldo” in the Kingdom of Heaven? (Movie News)”