So apparently I often take on more than I can chew. As of right now, I’m finishing up a twelve-day giveaway on my YouTube channel, I still haven’t bought a single Christmas gift (which I plan to do ten minutes from now), and I just remembered that today is my day for the stocking stuffer. Good thing I didn’t tell the writers I would write about three things in my post…oh wait…I did! HALLELUJAH! One of these is blatantly Christmasy, while the other two, well…they remind me of Christmas. Kind of.

Of all the things that I remember most about Christmas, the fondest memories are of watching the movies and television shows that  come on. And probably my favorite of all time–ALL TIME–is The Snowman.

It’s a brilliant cartoon about a boy who tries to go to sleep on Christmas Eve and wakes up in the middle of the night to see that the snowman he made just came to life. And the snowman takes his hand, and they fly to a secluded forest where the boy sees a whole tribe of snow people who have awoken for this special night. The show is mostly free of dialogue, unless you count the introduction by DAVID FREAKIN’ BOWIE! I’ve read somewhere that this show airs every Christmas Eve in Norway. But here in the States, it’s harder to find–at least for me it is. The only place I find it is on YouTube.  It’s hard for me to express how profoundly this show affected me. As silly as it is, I think this show opened my mind to fantasy and how rich imaginative story-telling can take you, even without using words. The show makes up for its parsimonious use of words by employing one of the best soundtracks I’ve ever heard. It’s the perfect match for the visuals in this show. As a side note, fellow SFC writer Brandon Gibbs asked me to mention that the Christian band Eisley did their rendition of “Walking In The Air,” which is the main theme of the show. Oh God. I just realized I don’t own the soundtrack to this show. Must. Change. That. Now.

Okay, now my second choice is a bit of stretch. It has nothing to do with Christmas except for the fact that 1) it’s awesome, and 2) I happened to read this book during Christmas. The book is Whipping Star by Frank Herbert. 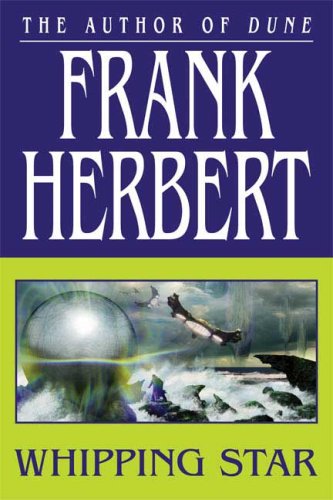 Dune is obviously Frank Herbert’s masterpiece. It’s clearly a genius work of science fiction, but I’d say that Whipping Star is my next favorite book by Herbert. It’s fairly fast-paced and the plot is interesting with the classic style of the “big idea” being a major component. The big idea, in this case, being what if there are creatures that exist on multiple planes of existence. In this book, the main character starts a “relationship” of sorts with a Caleban, entities whose existence is manifested on our plane as stars. The book is great because it leads you to think about how big God is, and maybe that’s why this is quasi-Christmasy. It leads me to think about God, or in this case of this story a “god”, who is higher and larger than us, who comes down on our level in order to form a lasting relationship. You can’t see me right now, but I’m patting myself on the back for turning this book into a valid Christmas analogy. 🙂

The next choice I have for you is a musical choice this time. I thought about leaving it out because it’s neither Christmasy nor sci-fi, but I decided to leave it in because of the message it brings. Unless you are one of the unfortunate few amusic people in the world, you probably love music as much as rest of the world. I’m addicted to my iPod. And when someone gives me new music to listen to, they’re my new best friend. At the time I was reading Whipping Star, a friend gave me Jason Morant’s album Open, and it blew me away!

This is the rare time in which I can honestly say that this is a perfect album. Every song on here is great and every word of every lyric and every note of every chord counts. As in the case with my previous choice, this reminds me of Christmas in a way because the theme of the album seems to have more of a “bigger picture” or eternal perspective–you could even say a “Kingdom” message–about it. And I think that’s what led me to form the connection to Christmas. I heard a story about the Christian band Downhere and their song “How Many Kings” and how they actually wrote that song for one of their normal albums, but people everywhere thought it was a Christmas song. I have to admit, I thought the same thing, and I can’t blame anyone for this association, since the message of their song is about King Jesus laying aside his divine privileges to come to earth as a baby–clearly imagery of the Nativity and of Christmas. But after thinking about this, I realized that I was putting a Christmas connotation and spin on the message of the Kingdom of God rather than letting the message of the Kingdom of God define what Christmas means. So instead of thinking about God’s greater plan for humanity (as we probably should), when I heard the song I thought, “That’s a great song for the holidays.” That’s when I came to the realization that my “Kingdom IQ”, as it were, is very low. Now, coming back to the album Open, it does paint a message of eternity in broader and deeper strokes than what you would hear on Christian pop radio stations. And because of that, it does sound reminiscent of some of the great Christmas hymns which showcase God’s redemptive plans rather than talking about snow and Santa Claus.

Personally, I love how the story of the Advent is about God coming and changing us. Even in something as silly as a manger, God forever  changed the association with barnyard animals to that of Christ. If we’ll let him, Christ, by the Holy Spirit will start to assert himself in the associations of things in our daily lives. You may even see Christ in Frank Herbert novels just like me. 🙂