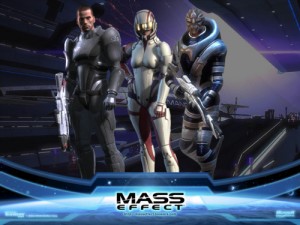 As a prelude to reviewing arguably the most anticipated game of 2012, I take a look at where it all began.

Not many video games have the resonance that the Mass Effect series has, and the first got the ball rolling with an excellent story.  As Commander Shepard, the player assumes the task of saving human colonies from the Geth, a race of rougue AI that seem to target colonies on the outskirts of their space.  Not long after the first mission, however, it becomes clear that the Geth are nothing more than pawns in an intergalactic siege of immense proportions.

Bioware did an excellent job in providing the player a customizable gaming experience; Shepard’s looks and gender can be adjusted, as well as choosing a personal and military background.  There are six classes, each with a mix of Soldier (weaponry), Tech (disabling technology) and Biotic (crowd-control “magic”).  From there, players can choose dialogue options that give them “paragon” or “renegade” points, basically interacting as a wholesome person or an unfeeling jerk.  There are advantages to both, and while they don’t affect the overall story now, certain paragon or renegade options have repercussions that will branch out into the next two games.

There are romance options, too; a male character can choose to woo Alliance soldier Ashley Williams or the genetically perfect alien Liara T’soni.  Women have the option of Alliance biotic Kaiden Alenko or, again, Liara (which is explained as a possibility due to her alien herritage).  While interesting in their own right, the romances are not integral to the plot and they can be skipped altogether (though it is a bit tricky), and there is a bit of PG-13 interaction going on if you get that far. 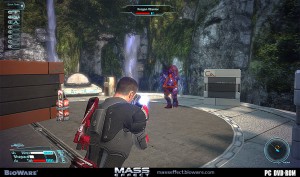 Gameplay is the real drawback to Mass Effect.  Both Tech and Biotic powers seem more like add-ons than actual enhancements to the game, and their use can be awkward.  Sure, they have their uses, but the game feels more like a shoot-em-up with the added tactic of special moves.  Close-quarter combat is a joke, so you have to be careful not to let anyone get too close.  And don’t get me started on the vehicle missions…they bring the replayability of Mass Effect down a lot.  When I started my replay for this review, I almost stopped playing due to the pain of going through these again.

Again, when faced with console versus PC gaming, there is very little difference between the two.  While there is a large modding community for Mass Effect on the PC, the game itself was not designed for modification, making offerings in that venue light.  This is truly a game that can be enjoyed on either platform.

They’re good, but not great.  This game is five years old, after all, and I have to say the color pallette is just not as vivid as it could have been.

The score and main theme is awesome, I just wish there was more of it.  I found myself getting bored with the ambient noise and music simply because I just heard it on the last mission.

With the lackluster Tech and Biotic powers coupled with the dreadful vehicle missions, I found myself tearing my hair out at times.

Even with Paragon and Renegade options, the main mission is to save the galaxy.  The relationship aspect can be skipped, and even if not, it’s pretty tame.

If I could give this a 6, I would.  It’s engrossing and adventurous, galaxy-scoping and fun.  Doesn’t get any better than that.

I’ve been pretty hard on the gameplay for Mass Effect, but don’t let that deter you.  It tuly is an excellent game, and worth it even if you don’t decide to play the next two.  After playing, though, you’re going to want to know the fate of Commander Shepard and his crew.  I guarantee it.