Tomorrow, Mass Effect 3 will be released, but before that I review the phenomenal second game in the series.

Mass Effect was a great game with a deeply involving story, but it had tragic gameplay flaws that made replays a chore. Its sequel overcomes those pitfalls, making it one of the greatest Electronic Role Playing experiences ever made. The story (kind of) picks up where Mass Effect left off, with Commander Shepard pursuing the remaining Geth across the galaxy. This is short lived, however, as the intro sequence sees the death of a character that, if you played the first game, you’ve already invested 20 plus hours with.

Thankfully, the developer Bioware doesn’t pull any punches when it comes to story, and soon the player is faced with a character generation screen with which to remake Shepard again, resurrected by a pro-human organization known as Cerberus. The mission: stop a mysterious race known as “Collectors” from abducting entire human colonies. Creating a new Shepard is a breeze whether you import your save from the previous title or not. If you did, you are treated the integration of many decisions you made during the Geth adventure. If not, a standard story is played out, and you miss some of the satisfaction of seeing your influence on the galaxy. 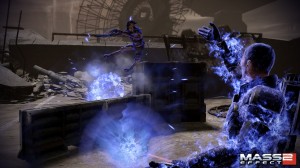 The revamp of character classes add much to the game; instead of just intermixing a stock set of powers between each class, specific abilities are granted based on your choice. From slowing down time for more accurate shots, or engaging a temporary cloaking field, to transporting across the room to fire at an enemy point-blank, a gamer needs to play through Mass Effect 2 multiple times to experience it all.

The story suffers a bit; the core storyline is a little slim and if no side quests are undertaken, it could take relatively little time to complete. It mainly feels like a set-up for Mass Effect 3, which makes is bit of a reminder of The Empire Strikes Back: you have a really good time and need to play again, but still can’t wait for the finale.

PC versus console is a non-issue, as again mods are not a big part of the Mass Effect universe. If I had purchased my PS3 earlier, I may have gotten Mass Effect 1 and 2 for that instead of my computer.

Still not the best, but better than the first title, and the color palette is a vast improvement.

Voice acting is top notch (they even got Michael Dorn, aka Lt. Worf!), and the score is beyond belief. There are major themes for each character, and they are very hardly reused.

Paragon and renegade options make a return, as do relationships. With the former, you still are saving the galaxy as a goody-goody or a jerk, and the latter can be skipped (but are PG-13 instead of the prior’s PG rating).

Not as involved as Mass Effect, but even with a less-than-enticing main story, side quests (and Loyalty Missions where you gain the trust of your squad) make up for its lack of depth.

Overall Score = 5 “No Library is Complete Without It”

I love this game. I’ve played through about six times already, and I don’t get a lot of time to mess around anymore. It’s truly something to be experienced, even if you don’t want to play the first. I think you could get them both for about $40 total now, though, so you really have no excuse not to have fun anymore.

I’m talking to you, Max.