Attention, mere mortals! Do you know where you will stand in the coming dispensation of Flint, Ultra-Lord of the Universe?

If not, don’t worry. You probably have some time to make peace with this future master of all he surveys. Right now, Flint is still just a fourth-grader in Austin, Texas; but were you to ask him what he wants to be when he grows up, he wouldn’t tell you something safe and predictable like “a firefighter” or “a teacher” or “an astronaut.” No, Flint’s apparently plotting to rule pan-galactic civilization with an iron fist.

He let his master plan slip in an admiring letter to a local TV meterologist, Albert Ramon, that has gone just as viral as any YouTube video. In case you haven’t yet read this epistle of awesomeness, here it is: 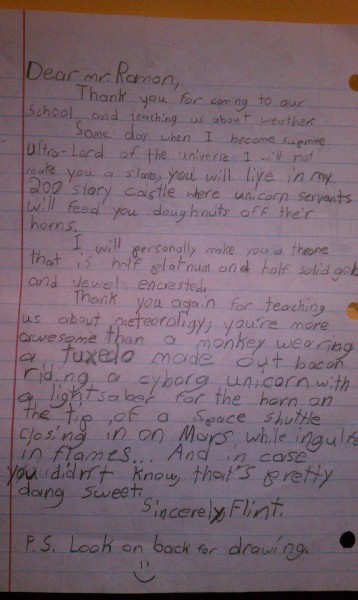 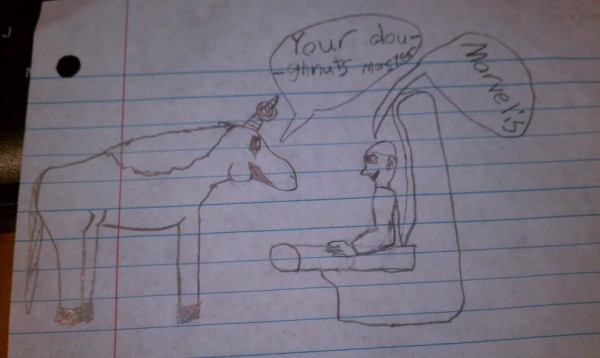 Doughnut-proffering cyborg unicorns? Man, how do I get on young Master Flint’s good side?

Some skeptics wonder whether Flint’s letter is for real, but I find no reason to doubt its authenticity. Flint’s fantastic fantasy sounds like the marvelous mash-ups I used to concoct at  that age, let alone the sometimes jarring but always enjoyable scenarios my four-year-old daughter plays out on a regular basis. (If I had a dollar for every time General Grievous had invaded Seasme Street with Baker Smurf as his right-hand man…!)

And, incorrigible sci-fi Christian that I am, I can’t help but think that Jesus would enjoy reading Flint’s letter, too. He did, after all, say to his disciples, “Truly, I tell you, unless you change and become like children, you will never enter the kingdom of heaven” (Matt. 18.3, NRSV). Granted, in its immediate context, Jesus’ saying encourages a level of humility that the Ulta-Lord of the Universe might not appreciate. But I think we can safely infer that Jesus also values children’s imagination and excitement–qualities on which the more “mature” among us don’t always draw when sharing and living out our faith. And don’t forget that Flint’s letter is a thank-you note. Gratitude for Ramon’s visit to the school motivated this monumental missive. Such wholehearted thanksgiving is, in Flint’s words, “pretty dang sweet,” and may just model the quality of gratitude we are called to give to others, and most of all to God.

In the meantime, everyone treat Flint really, really nicely, so that we, too, may be granted to sit on jewel-encrusted thrones on his right and his left, wearing our baxon tuxedoes as we watch Mars burn, laughing and popping doughnuts into our mouths all the while…

Pictures of Flint’s letter from René A. Guzman, “Kid’s letter to Austin meteorologist thanks him with unicorn servants, jewel encrusted throne and more sci-fi awesomeness,” http://blog.mysanantonio.com/geekspeak/2012/03/kids-letter-to-austin-meteorologist-thanks-him-with-unicorn-servants-jewel-encrusted-throne-and-more-sci-fi-awesomeness/.