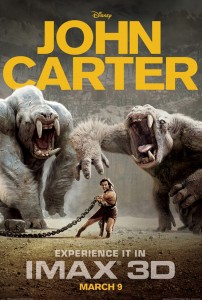 I have been really critical of Disney and science fiction offerings in the past.  So I have been watching reports and rumors for John Carter with both hope and fear.  I have said several times that Andrew Stanton’s involvement convinced me that the film would be solid.  And I read the original John Carter book Princess of Mars and loved it.  I could see how it would be the great foundation of a movie.  But reports that are predicting that John Carter will be a flop have worried me.  And I have had my own fears because the initial trailers did not do justice to the movie I hoped for.  I was finally able to form my own opinion of John Carter at the D23 nationwide previews held before the movie release.

The bare basics of the story are that John Carter is a Civil War veteran and cavalry officer attempting to find his fortune and maybe himself in the western frontier.  In the search for his cave of gold he is transported to Mars, or Barsoom.  On Barsoom he finds himself meeting new peoples and cultures such as the Tharks, a green Martian race, and getting caught up in a struggle for control of Barsoom.  Once it is discovered that Carter has super strength and jumping ability due to his Earthly birth, he is urged to enter this struggle by Princess Dejah Thoris, who of course serves as a love interest.  Here are my initial thoughts on John Carter:

I have not been a fan of Disney sci-fi.  Everyone debates how to fix Tomorrowland.  Tron is a cult classic.  And that is not even addressing animated films like Mars Needs Moms and the critical reaction.  But I won’t complain about John Carter.  Instead I am excited for more adventures on Barsoom.  And I hope enough of us vote by visiting the theater to give Stanton the green light to jump into the next production.

Orginally posted at www.betweendisney.blogspot.com
* Since the orginal posting of this review Disney has announced the expectation of a $200 million loss for John Carter.