“Luke, I am Your Father!” is one of the most iconic and misquoted movie lines of all time. Everyone, well except for the one guy at my work who has never seen a Star Wars movie, instantly knows the significance of this quote.  In this one moment we find out that Lord Vader has a back-story more complicated than we initially believe.  Yes friends Darth Vader is a daddy!  But what kind of dad would the Dark Lord of the Sith been if he was not serving the Emperor and took his fatherly responsibilities seriously?

Jeffrey Brown’s Darth Vader and Son provides a humorous window to what growing up with Darth Vader as a dad might have been like.  Brown illustrates episodes from the parental career of Darth Vader, episodes that may likely feel familiar to many a father.

What parent has not been asked if we have arrived at our destination yet?

And taking a son to the baseball diamond is a sacred right for all baseball loving dads. 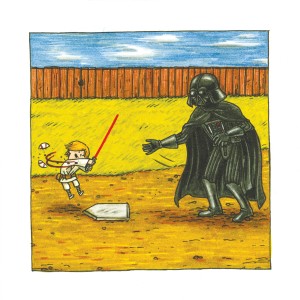 Personally, I think Darth Vader and Son looks hilarious and would not be shocked if it made its way to my bookshelf at Father’s Day!  It looks like a volume that many a sci-fi Christian dad would enjoy and share with his children.

3 comments on “Darth Vader and Son”