If, like me, you’re a fan of L. Frank Baum’s Oz books (he wrote 14 of the; subsequent “Royal Historians” brought that number to 40), you know there’s a lot more to that famous fairyland than what the 1939 Judy Garland musical, as deservedly celebrated as it is, showed us. More importantly, you know that Oz is no dream! After all, the Wizard himself got from the American heartland to that country “over the rainbow” long before Dorothy. Now, Disney is bringing the Wizard’s backstory to glorious black-and-white and Technicolor life (but of course!) in Oz: The Great and Powerful (due March 2013). The first teaser trailer has gone live, and it looks appropriately magical:

I can’t wait for this one! Disney hasn’t looked to Baum for inspiration, to my knowledge, since 1985’s unjustly unloved Return to Oz (still the best Oz film ever made–no disrespect to Ms. Garland and friends–not to mention one of the finest cinematic fantasies ever attempted), but there’s no stuido better equipped to bring a new Oz story to the screen. We’ve already got a strong cast, several of whom are heavy with geek cred, headed by James Franco and Mila Kunis. It does appear the movie will depart from Baum’s established Oz lore in some details–as I recall, Oscar Diggs (the Wizard’s real name–a geeky silver kiss on your forehead if you knew that one already) hailed from Nebraska, not Kansas; and in the original book he claimed credit for the Emerald City’s construction (although he is, of course, a humbug)–but Baum himself was never above contradicting continuity in the service of a good story. (The Wizard’s takeover of Oz as related in Baum’s second book is actually a fairly grim business, involving shady deals and a kidnapped baby–quickly discarded plot elements that Gregory Maguire exploited to great effect in Wicked and his subsequent Oz novels.) And it looks as though Disney will show moviegoers some inhabitants of Oz for the first time (did you see the dainty china people? Wonderful!)

Most interesting, however, is the suggestion that the Wizard is driven by a quest to become “not just a good man, but a great one.” It’s hard to tell too much from a teaser trailer, of course (hence the term), but I wonder whether Oz: The Great and Powerful will end happily or will show us how Oscar turned from an innocent and accidental visitor to a (mostly) benign despot. Just before the trailer ends, someone asks Oscar, “Are you the great man we’ve been waiting for?” I suspect how he answers that question will plant the seeds of his slide from being “Oz, the Great and Powerful” to the title by which he announces himself to Dorothy and her companions, “Oz, the Great and Terrible.”

As Christians, we have been told and shown that true greatness is achieved, not by leading others, but by following Jesus. He came among us “as one who serves” (Luke 22.27), becoming poor for our sakes “so that by his poverty [we] might become rich” (2 Cor. 8.9). He “emptied himself, taking the form of a slave,” and humbly followed his Father’s will, “obedient to the point of death–even death on a cross” (Phil. 2.7, 8). Now risen and exalted, he rules, not by brute force or–as Oz will later rule his land–through secrecy and fear (“No one sees the Wizard! Not nobody, not no how!”)–but by love. And he calls us to live likewise: “Just as I have loved you, you also should love one another” (John 13.34). We are to reject the road of making others grovel before us: “The kings of the Gentiles lord it over them… But not so with you; rather the greatest among you must become like the youngest, and the leader like one who serves” (Luke 22.25-26). 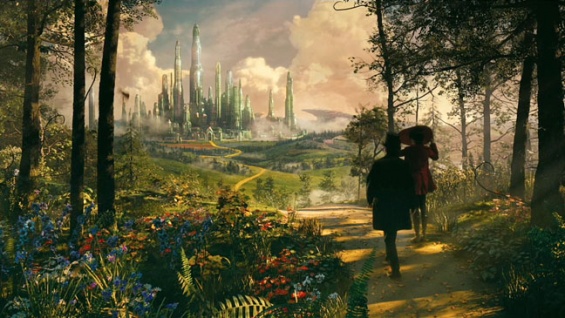 Given what happens once Dorothy shows up, I doubt Oscar really is “a whiz of a wiz” who wisely follows the path of servant leadership. Still, I’ve high hopes that his journey down the Yellow Brick Road will be just as, if not more so, entertaining! What do you think?