Bob Hoskins, the 69-year-old, veteran English character actor best known to fans of fantasy films for his roles in such films as Who Framed Roger Rabbit? (1988), Hook (1991–he also played Smee in last year’s miniseries Neverland) and even this summer’s Snow White and the Huntsman, announced yesterday that he will be retiring due to a recent diagnosis of Parkinson’s Disease.

Some of Hoskins’ other genre-related roles include Conan Doyle’s other famous fictional hero, Professor Challenger (in a 2001 TV movie of The Lost World) and none other than Mario in Super Mario Bros. (1993). Although Roger Rabbit marked his general introduction to the American public, he had, according to the New York Times’ All Movie Guide, “long been recognized in his native England as a performer of exceptional versatility, capable of playing characters from working-class toughs to Shakespearean villains.” 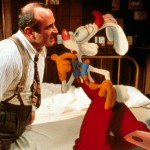 I am one of few genre fans, it seems, who has little affection for Roger Rabbit. Knowing only that the movie combined animation with live action and that Steven Spielberg was involved, I naively recommended my grandmother take us three grandkids–including my then-kindergarten age sister–to see it. Whoops! While I appreciate the ways in which the film was a technical breakthrough, I’ve never stopped regretting that recommendation! I do, however, acknowledge that Hoskins turned in a great performance; no wonder us Stateside moviegoers took notice of him.

I much preferred his turn in Spielberg’s unfairly maligned Hook, however. Whether giving his “almost unfathomable” captain an introduction worthy of a WWE wrestler…

…or not trying to stop him this time…

Like so much of the life God has given us, aging can be both a blessing and a burden. “Gray hair is a crown of glory,” the sages of ancient Israelite tell us; “it is gained in a righteous life” (Prov. 16.31). But Israel’s wisdom tradition also reminds us, “Rembember your creator in the days of your youth, before the days of trouble come, and the years draw near when you will say, ‘I have no pleasure in them'” (Eccl. 12.1). Parkinson’s disease doesn’t, of course, afflict only the aging; we’ve all seen how another favorite of genre fans, Michael J. Fox, has risen to its challenge. But, while age is only one risk factor, “Parkinson’s Disease occurs more often in people over 50 years of age when compared to younger people,” writes Patrick McNamara, Ph.D.

“You shall rise before the aged,” God commands God’s people, “and defer to the old” (Lev. 19.32). So please keep not only Mr. Hoskins but all who live with Parkinson’s as well as all who are aged and infirm in your thoughts and prayers; and honor them, for they are honored by God.