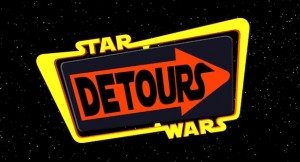 For nearly 3 years we have heard rumors of an animated Star Wars comedy developed by the creators of Robot Chicken, Seth Green and Matthew Senreich, in partnership with Lucasfilm Animation. Everyone assumed that the project called Squishies for a time would likely be targeted to kids but might appeal to adults based on the creative team guiding it. But fans wondered if the show would be closer to the adult humor of Robot Chicken and their Star Wars parodies or a show like Super Hero Squad which used Marvel superheroes in action situations more appropriate for a 5 year old than an adult fan base.

At the recent Star Wars Celebration VI they showed how far they have come along with a trailer and clips from the show debuting in 2013, now titles Star Wars Detours.

Do you ever wonder how rumors get started?
http://youtu.be/JRu9vpcz-zM

They could be twins!
http://www.youtube.com/watch?v=EjvZuYI0xfg&feature=share&list=PL8BA6CF6978B4E2C1

It seems standards are slipping these days.
http://youtu.be/1Ojm0YsTCM0

Okay, I love this idea and am really looking forward to it. It’s clear that some of the humor is for the core Star Wars fans by taking stabs at force powers and the age old question of where does the Emperor relieve himself. And I feel that Lucasfilm Animation has really proven themselves with another show with a very different tone in Star Wars The Clone Wars I know that many fans will hate this. They will hate seeing their original trilogy characters in silly circumstances. But if those same people enjoyed Weird Al’s Yoda, well I frankly cannot see their point. As for me, I waiting and optimistic for 2013!

I’m just a guy who enjoys wearing his Boba Fett shirt, with the famed bounty hunter styled after a space ranger! 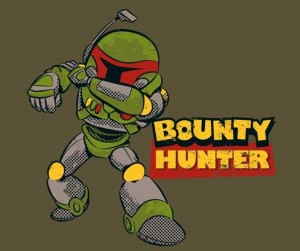 So maybe I’m a little silly to begin with. But based on the smiles that shirt brings. Well, I do not think I am alone!