The Series Seven premiere proves to be a quest story in more ways than one. 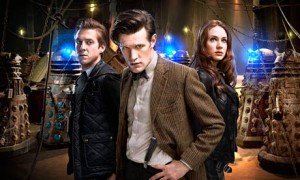 Last year, I had to watch “The Impossible Astronaut” (6.1) three times before I could decide whether I liked it. Not so this year. Series Seven’s opening salvo won me over the first time through. Granted, the idea that the force field surrounding the Daleks’ planet for the incurably insane can only be shut down from within is, to put it charitably, counter-intuitive. Everything else about “Asylum of the Daleks,” however, works, and wonderfully so—from the creepy concept of Daleks’ human “puppets,” to the shifting of the self-destructing Dalek into “reverse,” to the necessity of an “intensive care unit” for Daleks who’d survived (but only just) previous encounters with the Doctor, their “predator.” Even the quintessential Who cliché of running through corridors felt like a romp rather than a retread!

“The Eleventh Hour” (5.1) will likely forever be the gold standard against which I judge Doctor Who season openers, but “Asylum of the Daleks” benefits immensely from having to introduce neither new ongoing characters nor continuing story arcs (unless, of course, it did the latter—more on that in a moment). The episode does, of course, build not only on what Moffat has already accomplished in his two years as Who’s head writer—the news, just a few minutes in, that Amy and Rory’s marriage is on the rocks comes as a real blow to those who’ve been faithfully following them; and so the Doctor’s masterful manipulation of their reconciliation comes as an equally real relief—but also on arguably the show’s most iconic lode of lore beyond the Doctor and the TARDIS: the Doctor’s longest-running nemeses, the Daleks. But the story still feels new (as the Doctor himself observes in a nice meta-moment as the members of the Daleks’ Parliament shrilly cry out for salvation). No great knowledge of Who trivia is needed to understand and enjoy this story. The Doctor and his Companions are “acquired” from their current circumstances and are plunged (maybe that’s why the Daleks come equipped with those things!) into a suspenseful, fast-paced, and, ultimately, poignant quest. 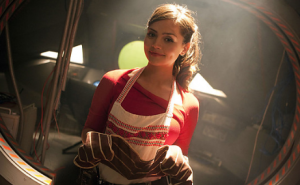 The show really shines, however, in Moffat’s gift of yet another brilliant “one-off” character in Oswin Oswald. Or is she never to return? I’m doing my best to avoid spoilers this year (River Song would be so proud), so I don’t know what, if anything, to make of the fact that Oswin was played by (to my mind, a very Summer Glau-esque) Jenna-Louise Coleman. She, of course, has been cast as the Doctor’s next Companion, starting at Christmastime. Coleman wouldn’t be the first Who actor to play a Companion after having played a different role in another episode: Freema Agyeman came aboard as Martha after having played Adeola “Army of Ghosts,” 2.12), and Karen Gillan played a soothsayer in “The Fires of Pompeii” (4.2) before returning as Amy Pond. But doesn’t poor Oswin seem like the kind of person the Doctor would want to save, if at all possible? There was simply no time once Oswin deactivated the force field—but, assuming her act isn’t a “fixed point,” with a TARDIS, there might be all the time necessary for a rescue in the Christmas special. (After all, as the Doctor reminded Rory, “You can do a lot in four seconds.”)

In any event, Coleman’s work as Oswin leads me to think we can look forward to enjoying another engaging, highly capable actor in Series Seven’s second half, whatever character she will play. Coleman made Oswin feel fully realized in only a matter of minutes, creating a bond with the audience even as she formed ties with Rory and the Doctor (“the nose and the chin”!). The revelation of her “fully converted” status was shocking (even though Moffat, clever man, had hidden it in plain sight: Oswin’s innate knowledge of Daleks and their technolog; the Doctor going on about impossible soufflé ingredients, coupled with Rory’s amusing conversation with the Daleks about eggs) and deeply sad. Even without the benefit of playing off Matt Smith’s reactions or the quick flashback editing, Coleman clearly conveys both the trauma Oswin experienced and her horror as it emerges despite her best efforts to bury it.

Coleman also clearly sounds a note Moffat-era Who has now sounded repeatedly, without losing any of its force: the power of the individual to determine her or his own identity. Oswin’s resolution to aid the Doctor and his Companions’ escape, even at the cost of her own “extermination,” harkens back to such moments as Professor Bracewell’s rejection of his robotic status in “Victory of the Daleks” (5.3—as Churchill asked him, “I don’t care if you’re a machine; are you a man?”) and Rory’s assertion of his humanity even as the “plastic” Centurion (“The Big Bang,” 5.13). Even though Oswin is physically a full Dalek, her spirit remains indomitably and irrevocably human. The Daleks cannot determine Oswin’s identity because she is determined to define herself.

Like Oswin, Christians are called to resist having an identity imposed upon us from the world around us. The apostle Paul, for instance, exhorts us to avoid being conformed (might we say, “fully converted”?) to this world (Rom. 12.1). Like Oswin, we, too, are called to hold fast to our humanity. We do so, however, not by finding it within ourselves, but by “looking to Jesus the pioneer and perfecter of our faith…” (Heb. 12.2). Through our sin, we have forfeited full humanity, for full and true humanity involves living in the presence of God, as did Adam and Eve in Eden. As sinners, therefore, we must have true humanity restored to us—and this is what Jesus does. When Christians affirm that he was and is not only fully divine but fully human, we mean, in part, that he was the truest human who ever walked the earth. He was and is more human than any of us, because he remained obedient to God where we have not. He lived his life perfectly in God’s presence, where we, like our first parents, have run away in a futile attempt to hide from God (see Gen. 3.8). When Jesus died on the Cross, he died in our place, that true humanity might suffer the consequence of rebellion against God—and that, as the risen and ascended Lord, he might in himself restore humanity to its true place with God. He is, as the letter to the Hebrews teaches, our first glimpse of restored humanity (see Heb. 2.5-9). Because of and in him, we “must consider [our]selves dead to sin and alive to God” (Rom. 6.11). Because of him and in him, we are fully human again. That is not the identity we have chosen, but the identity God has, in Christ, chosen for us. That is the identity to which we must cling.

The episode’s epilogue suggests that the First Question (“Doctor who?”) may well become Series Seven’s leitmotif, keeping this quest for identity—what it is, who determines it, and what implications it carries—will continue to occupy our attention into the fiftieth anniversary year, at least. In the meantime, we have what looks like a gloriously goofy rendezvous with “Dinosaurs on a Spaceship” to look forward to… although, if I know Doctor Who, that story, too, will give us plenty of food for thought.

Maybe even an impossible soufflé’s worth.