I’ve probably confessed this before, but since confession is good for the soul, it can’t hurt to do so again: I used to be a Star Trek snob. Whenever some (usually) well-meaning person talked to me about how much I liked Star Wars, I would immediately inform them, as only a pedantic nerd can, that they were wrong. Star Wars was okay, I’d say, but, in the end, it was all about spaceship shoot-em-ups, where Star Trek was about Big Ideas (and, yes, I’m certain my inflection conveyed the capital letters).

Well, I’ve relaxed a lot over the years (and thank the Great Bird for it), but I do remain a Star Trek fan in large part because, whatever its flaws and shortcomings, it usually has never been afraid to tackle those Big Ideas—including Big Religious and Theological Ideas. Star Trek: The Next Generation—which officially premiered, in most markets, twenty-five years ago today—shared the original series’ penchant for engaging (ha!) important questions about human nature, cosmic destiny, even God. I didn’t and still don’t always agree with the answers it put forth, but I did and always will appreciate and enjoy the conversation.

To celebrate TNG’s big quarter-century birthday, I’ll be looking back, for the next 25 weeks, at some of what I think are some of the series’ most theologically significant moments. (Happily enough, the first season produced 25 episodes—counting the pilot, later broken into two episodes, as one, which, for the sake of numerical elegance, we will!) I won’t be offering full synopses or reviews; I’ll be, for the most part, focusing on an important scene or two, a key line here and there. And these aren’t my choices for the 25 best moments in the series. These reflections are simply offered as Star Trek snapshots that, I hope, will spark interactions with Scripture and Christian faith as lively as anything happening in a warp core’s intermix chamber.

I hope you’ll join me for the journey. And so…

1. Humanity on Trial (“Encounter at Farpoint”)

I am not a first-generation Star Trek fan, but I was introduced to it by friends in 1985, one whole year before Star Trek IV proved a crossover hit and gave the franchise a shot of mainstream respectability, and several years before TNG would make it “cool” (or at least as “cool” as Star Trek could be in mainstream eyes, in those long-ago, pre-J.J. Abrams days). Since I knew only the original cast of characters, I was skeptical when my best friend, also a fan, called me to tell me he’d just learned that a new Star Trek was premiering in a few months (how ever did we get excited about things before the Internet, huh?). I was convinced that old Trek magic couldn’t be duplicated. But then my best friend told me the pilot episode’s premise—“The Enterprise crew stands trial for the crimes of humanity”—and, just like that, I couldn’t wait for September 28, 1986 to arrive.

I watched “Encounter at Farpoint” that night in rapt attention, thoroughly enjoying every minute. I recorded it off the air, taking care to pause the VCR (remember those?) during each commercial break in order to have a movie-like experience upon repeat viewings (and there would be many). The next morning at school, my tenth-grade English teacher casually asked if anyone had seen the new Star Trek. I was the dweeb who started applauding.

Riker: Just hoping this isn’t the usual way our missions will go, sir.

Picard: Oh, no, Number One. I’m sure most will be much more interesting.

I do, however, believe “Farpoint” is far stronger—as a premiere episode and as a solid “Star Trek” story—than many fans today give it credit for. Most of its continued viability rests squarely on the shoulders of (pre-knighthood) Patrick Stewart, who immediately establishes Jean-Luc Picard as a different kind of captain, a different kind of hero, than James T. Kirk—but a heroic captain all the same, one I’d certainly follow into “the vast unknown reaches of the galaxy.”

The other aspect of “Farpoint” that continues to shine is John de Lancie’s Q. By turns menacing, mysterious, comical, and even pathetic, de Lancie makes the Enterprise’s über-alien Inquisitor much more than “the same old story” Picard initially accuses him of being. Yes, he would become an overly familiar face, even on TNG, let alone his appearances as a shell of his former self on Voyager. But de Lancie claimed a permanent place among the ranks of “Star Trek”’s most iconic adversaries in this initial outing, creating a charismatic and compelling cosmic trickster—and, occasionally, terror—who cannot be forgotten. No longer do media-savvy folk only think of James Bond’s gadget master when they hear the letter “Q” in isolation!

Q appears in several guises during this episode, but his most vivid and memorable is that of a judge from twenty-first century Earth’s “post-apocalyptic horror,” presiding over the kangaroo court  in which Picard admits—albeit with guns pressed to Troi and Data’s heads—that “humans have been savage.” A supremely self-satisfied serenity spreads over Q’s face at Picard’s confession that, in the past, humanity has been (in the words of Q’s charge) a “savage child race.” In the moment just before Picard proposes that he and his crew be tested “to see whether this [charge] is presently true of humans,” Q is ready to use his seemingly god-like power to pass what we can only imagine would be a devastating 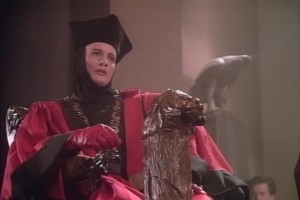 It’s just that barely contained glee at the prospect of bringing some galactic gavel down on humanity’s head (starting with Picard’s own bald one) that exposes Q’s power, impressive though it is, as anything but God-like, at least as far as Christians are concerned. Intentionally or not, this moment mirrors the climactic moment of Star Trek’s second pilot episode, “Where No Man Has Gone Before,” two decades earlier, as Captain Kirk rightly shouts at a super-mutated Gary Mitchell, “Above all else, a god needs compassion!”

No question: God is our Judge. God has every right to haul humanity into a cosmic court and level a charge against us far worse than the one Q brings against Picard and his crew. The real, sorry state of affair isn’t so much that we are a “savage child race”—although God knows, literally, we have been, and in many ways still are—but that we are sinners. We have deliberately turned our backs on the life with God for which we were created. As the prophet Isaiah laments, “We have all become like one who is unclean, and all our righteous deeds are like a filthy cloth” (64.6). Even at our best now, and even in our best moments yet to come, in the 21st or 24th centuries, we are and will be a fallen race, a race that has fallen far short of its Creator’s good will for it.

Christian faith doesn’t hold, as Picard does, that any marks in humanity’s “positive” column can ultimately offset the marks in its “negative” one. We don’t deny that human beings are capable of good, even great, things—but neither do we pretend that those things can excuse or offset our offense against God’s glory and goodness. No; we confess, along with the contrite King David, “Against you, you alone, have I sinned, and done what is evil in your sight, so that you are justified in your sentence and blameless when you pass judgment” (Ps. 51.4).

But God does not judge as Q judges! If Q truly understood what it means to be God, he would get out of that fancy, floating hover-chair of his and take Picard’s place in the dock, ready to stand under his own death sentence. That is exactly the move God made in Jesus Christ. When we were “dead in trespasses”—when we had no chance, no hope, of mounting any defense—God “forgave us all our trespasses, erasing the record that stood against us with its legal demands. He set this aside, nailing it to the cross” (Col. 2.13-14)—the cross on which Jesus Christ, the Son of God, the Word of God made flesh, suffered and died in sinful humanity’s place. Karl Barth, the most influential Protestant theologian of the last century, looked at the cross of Christ and saw, in his words, “the Judge judged in our place.”

This is not all that Christians have to say about Jesus—but it is a crucial truth we must say. God’s justice demands that sin be punished. God’s compassion, God’s love, demands that God bears that punishment for us. “For our sake,” writes the apostle Paul, God “made him to be sin who knew no sin, so that in him we might become the righteousness of God” (2 Cor. 5.21).

Midway through “Farpoint,” Captain Picard defiantly declares, “If we’re going to be damned, let’s be damned for who we really are.”

In contrast, the Gospel declares that we are saved for who the God revealed in Jesus Christ really is.

Next Week: What wonders will we find “Where No One Has Gone Before”? Rewatch the episode and share your insights in the comments below!

4 comments on “The Great TNG@25 Theology Trek: “Encounter at Farpoint””