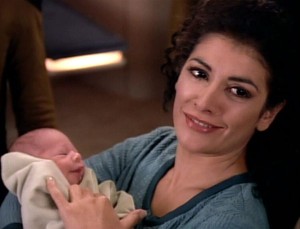 It’s a shame “The Child” kicked off TNG’s second season in late November, 1988. About a month later would’ve been more appropriate, since this episode is the closest Star Trek has ever come to telling the Christmas story.

“The Child” seems cribbed not only from a teleplay first drafted for the unproduced Star Trek: Phase II series in the late 1970s but also from the language and imagery of the Incarnation. The show begins, literally, with a cosmic light shining in darkness and entering the world (see John 1.5), roaming the Enterprise until it enters the bedroom—and the body—of the sleeping Counselor Troi. The moment calls to mind various paintings of the Annunciation, in which a beam of light falls upon Mary to represent the virginal conception taking place. One can’t help but wonder if Joseph’s initial reaction to the news of Mary’s pregnancy sounded like Commander Riker’s reaction to Troi’s: “I don’t mean to be indelicate, but who’s the father?” And the birth of Troi’s baby—“her firstborn son,” to be specific (Luke 2.7)—is as effortless and serene as traditional iconography of the Nativity would have us believe Jesus’ birth was. I suspect that night in Bethlehem, while holy, wasn’t all that silent. Any fully human baby, however much also fully divine, would do some crying if lowing cattle startled him awake!

Ian Andrew Troi’s unusual birth heralds his unusual life and mission. Unlike Jesus, who “increased in wisdom and in years” (Luke 2.52), Ian ages several years in a couple of days. But he does share the young Jesus’ sense of purpose, even if he can’t articulate, as Jesus could, the higher “business” he must be about (see Luke 2.49, KJV). But when he realizes his presence has stimulated the growth of an unstable, mutated biological agent in the ship’s cargo that threatens to destroy the Enterprise, he knows his time has come to leave. He lets go of his young life, in effect sacrificing himself that others might live. 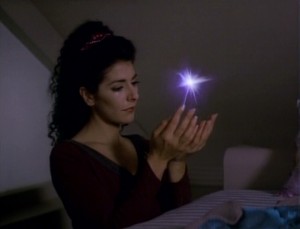 Ultimately, Ian’s purpose was to experience human existence from the inside out. As Troi explains, Ian was “a life-force entity. As we passed each other in space he was curious and wanted to know about us, and he thought the best way to learn was to go through the process. To be born, to live as one of us and, in that way, to understand us.” It’s tempting to compare Ian’s mission with the mission of God the Son in his Incarnation, but the suggestion that the Son became human in order to understand us seems heterodox, at best—in other words, close, but not quite. In Jesus of Nazareth, God did fully share our human existence. One of my favorite Christmas hymns, “Once in Royal David’s City” (Cecil Frances Alexander, 1848), stresses this point:

Jesus is our childhood’s pattern;
Day by day, like us He grew;
He was little, weak and helpless,
Tears and smiles like us He knew;
And He feels for all our sadness,
And He shares in all our gladness.

But God wasn’t “curious” about humanity. God didn’t have to become one of us in order to learn about us. Far from it: God freely chose to become one of us in order to save us from sin and evil and death! As the letter to the Hebrews teaches, “Since… the children [i.e., real human beings like you and me] share flesh and blood, he himself [i.e., Jesus] likewise shared the same things, so that through death he might destroy the one who has the power of death, that is, the devil, and free those who all their lives were held in slavery by the fear of death” (Heb. 2.14-15).

God’s entrance into humanity does resemble Ian’s in at least one way, however: when Jesus ascended into heaven, when he left this earthly life behind to enter into his Father’s presence forever, he took humanity with him, just as Ian takes his life as Troi’s fully human son into the stars from whence he came (okay, part-human, part-Betazed, as Dr. Pulaski points out). Jesus’ ascension is good news because, as the Heidelberg Catechism states, we now “have our own flesh in heaven—a guarantee that Christ our head will take us, his members, to himself in heaven” (Q. 49). Another verse of “Once in Royal David’s City” sings this truth:

And our eyes at last shall see Him,
Through His own redeeming love,
For that Child so dear and gentle
Is our Lord in Heav’n above,
And He leads His children on
To the place where He is gone.

There’s one more moment from “The Child” that struck me as a theological point of contrast with the Incarnation. Moments after Ian is born, Dr. Pulaski tells security chief Worf, “No threat here, Lieutenant. You and your men can relax. It’s just a baby.”

You know, anyone standing in the stable at Bethlehem might have been tempted to say the same thing: “No threat here—just a baby.” But anyone who said that would have been so wrong!

Have you ever noticed just how political the story of Jesus’ birth is? I hadn’t until a few years ago, when some good commentaries (The New Interpreter’s Bible, for one) made me aware. Take a moment to look at Luke 2 now, before the sappy sentimentalism and crass consumerism of “the holiday season” can cloud your vision. Note how Luke carefully frames Jesus’ birth against a political backdrop: Caesar Augustus on the imperial throne, and Quirinius ruling over Syria (Luke 2.1-2). The Roman Empire is flexing its muscle, ordering a registration, compelling people to go to their ancestral towns and villages for a head-count and a taxation (2.3). In the midst of this political and military climate, a baby is born—but not just any baby. This is a child whom “a multitude of the heavenly host” (2.13)—not a heavenly choir, mind, but a heavenly host, an angelic army—praise by giving glory to God, who alone can give peace on earth (2.14)—not Caesar, whose impressive but enforced by brute strength Pax Romana pales in comparison. This child, not Caesar, is called “Lord” (2.11)—and, as the angel Gabriel earlier told his mother, “of his kingdom there will be no end” (1.33).

And lest we think only Caesar and those like him—the emperors, the rulers, the politicos, the “powers that be” of this age—are threatened by this child’s birth, let’s listen again to Mary’s song about the meaning of this birth, the Magnificat so many composers have set to beautiful music that nevertheless threatens to dull our ears to her words’ force: God “has shown strength with his arm; he has scattered the proud in the thoughts of their hearts. He has brought down the powerful from their thrones, and lifted up the lowly; he has filled the hungry with good things, and sent the rich away empty” (1.51-53). Those of us who’ve benefitted from the power systems of our society, who’ve eaten our fill while others go hungry, who dare to complain about how much “stuff” we enjoy while so many have so little… well, we might find ourselves wishing for Worf and his security team (and maybe a bat’leth or two) in the presence of this Child, if we truly grasped what a radical reversal he comes to bring.

Just a baby? No doubt. Not a threat? Only if we kneel before his manger, in humility and repentance and trust, giving thanks that, in this child, God has come “to go through the process”—and to redeem it, and us, from the inside out.

Next week: We put Mr. Data on trial to take “The Measure of a Man.” Rewatch the episode and share your insights in the comments below!