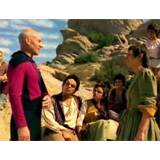 If this list were a countdown instead of a chronological one, this episode would almost certainly hold first place. A dramatic, smart, and moving exploration of what happens when the Prime Directive is inadvertently broken, “Who Watches the Watchers?” is also among the most explicitly theological installment of any Star Trek, taking its place with such adventures as the original series’ “Who Mourns for Adonais?” as an overt challenge to religious faith. I wonder if this episode’s interrogative title intentionally mirrors the other. As with “Adonais,” the “god” in “Watchers” turns out to be an advanced alien who depends upon the kind of incredibly advanced technology Arthur C. Clarke said would be indistinguishable from magic. This time, however, that advanced alien is one of us!

Watch this key scene from the episode. (Use the non-English subtitles if you like.)

No doubt, this is one of the most gripping sequences of TNG’s early years. But, from this sci-fi Christian’s perspective, it is also one of the most theologically disappointing.

Picard’s discomfort with Nuria’s reverence of him as “the Overseer” is, in itself, well-placed. It reminds me of the angel’s reaction to John the seer in Revelation: “I fell down at his feet to worship him, but he said to me, ‘You must not do that! I am a fellow servant with you and your comrades who hold the testimony of Jesus. Worship God!’” (19.10; cf. 22.8-9). Picard, however, urges Nuria to place her faith, not in any god, but in herself, teaching her that the Mintakans will, with time, make the same kind of wonderful advancements humanity has made.

Again, to a point, this exhortation is theologically justifiable. There’s no doubt God created humans in such a way that we are capable of amazing things. As the psalm-singer marveled, we are “fearfully and wonderfully made” (Ps. 139.14). But then Christian faith speaks this critical qualification: Having been fashioned in the image of God (Gen. 1.27), even having been placed “a little lower than God” and “crowned with glory and honor” (Ps. 8.5), isn’t the same as being God.

Granted, Picard does acknowledge humanity’s limitations in this episode (still smarting, perhaps, from the events of “Q Who”): “For all our knowledge, all our advances, we are just as mortal as you are. We’re just as powerless to prevent the inevitable.” But is death the only answer to the question the episode’s title raises? Are “the watchers”—Starfleet and Federation personnel—“watched” only by mortality? Star Trek assumes an advanced and enlightened humanity can and will hold itself morally accountable. Picard’s suggestion, early in the action, that Dr. Crusher should have left an injured Mintakan to die rather than beam him up to the Enterprise sickbay is a brief but chilling piece of evidence to the contrary. When we try to put ourselves in the heights that belong to God alone, we only set ourselves up to fall.

“Who Watches the Watchers?” crystallizes all of Star Trek‘s standard operating assumptions about religion. Bottom line: it can never be good. As you heard in the scene immediately above, it must, by Trek‘s logic, inevitably deteriorate into Inquisitions and Crusades. Leaving religion behind is, Picard states in no uncertain terms, an “achievement.”

I suppose, at this point, as an ordained minister, let alone and more importantly as a Christian struggling to be faithful to Jesus, I should roundly criticize the franchise for its secular humanist orientation. I’ve done of a bit of that in this post already!

The trick, of course, is that the critics of faith–of religion in general, and of Christianity in particular–have a point. Bad things, terrible things, horrible things have been done and are even now being done in the name of God. I’ll never forget sitting in a church history class in seminary, reading sermons from my own forebears in the Presbyterian tradition, preachers in the antebellum South arguing (so they claimed) from Scripture that slavery was entirely justified and must not only be continued but defended as ordained of God. 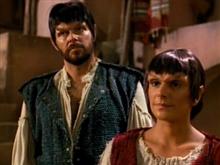 The incognito Counselor Troi’s question near the end of that second clip is one we Christians must never stop asking ourselves–What if we’re wrong?–because God knows, literally, we have been, and with devastating results.

But another question echoes in our ears, or ought to: “Lord, to whom can we go? You have the words of eternal life” (John 6.68). With apologies to Shakespeare, the fault, dear Christians, is not in our Savior, but in ourselves.

I appreciate this prayer for the Church, from the Episcopal Book of Common Prayer:

Gracious Father, we pray for your holy Catholic Church. Fill it With all truth, in all peace. Where it is corrupt, purify it; where it it in error, direct it; where in anything it is amiss, reform it. Where it is right, strengthen it; where it is in want, provide for it; where it is divided, reunite it; for the sake of him who died and rose again, and ever lives to make intercession for us, Jesus Christ, thy Son, our Lord.

You see, we pray for the Church, not to it. Our ultimate faith is not, cannot be, in the institutional Church, in “religion” as Star Trek defines it. The Church, religion, will always let us down, in some way, to some degree. But the One to whom the Church, at her best, faithfully points, the One to whom she belongs, will never disappoint or lead us astray.

Next Time: Join us (not to mention the Goddess of Empathy) on the Holodeck, won’t you? “Hollow Pursuits” await…

4 comments on “The Great TNG@25 Theology Trek: “Who Watches the Watchers?””