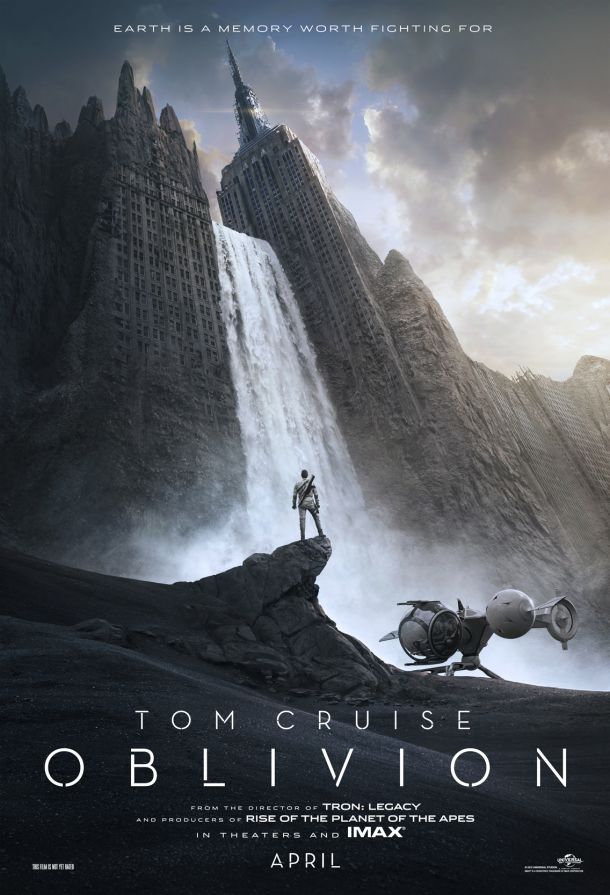 In Oblivion Tom Cruise plays Jack Harper, a drone repairman who is a part of an operation with the mission to extract the last remaining resources Earth can provide after a decades old war. Before Jack’s mission is complete his world is turned upside down when he rescues a beautiful stranger from a downed spacecraft. Jack is forced to question everything he knows and the fate of humanity is put in his hands.

This “original” story by Joseph Kosinski (Tron:Legacy) is his love letter to every sci-fi film that came before it. You have 2001, Wall-e, The Matrix, and a dash of Mad Max just to name a few of them. Since this film is wanting to be all of those movies the story feels crowded and the plot becomes muddy trying to fit them all into two hours. The pacing of the film I felt was off balanced. The first half is very slow as we watch Jack do his day-to-day drone repairs with the last half very fast pasted with action set pieces and character revelations one right after another. I wish it was more a bit of both throughout. There is a major plot point that I called out a few minutes into the film. It is very similar to another movie that I will talk about in the spoiler section below. Kosinski says that he wrote the concept for Oblivion before this other movie came out but it still came out before. This plot point is so intwined with the rest of the film that there was no way that he could have changed it. He had to do with what he had. Other wise we would have gotten a totally different film from him today.

As for the writing goes I would say it is meh. Perhaps there were too many cooks in the kitchen. The story was developed by Kosinski as a graphic novel, and written by William Monahan and Karl Gajdusek. In a recent interview with Slashfilm, Kosinski said this about Michael Arndt (writer of Star Wars: Episode VII) being a screenwriter on the film, “He did a couple of weeks on it, more than a couple of weeks. He spent two or three weeks…He did a lot of work at every level from structure to story, character…we worked on every aspect of the film. So to kind of pull out and say, “That’s his,” you can’t do that on a film. It’s such a collaborative thing…” This sounds like all he did on it was a polish. So Ben De Bono, I do not think this would be a good example to judge him by on what we can expect from him on Star Wars.

This film is very good looking. It is very clean. Joseph Kosinski has a background in architecture and it really shows in this film. The architecture of the buildings, the ships, the drones, even the way the civilization of the past has decayed are all portrayed beautifully. I do have to commend Kosinski for using practical effects when he can. Sure there is a lot of CGI in this film but when the film can go with practical effects it does. That is very much appreciated.

Here we have Tom Cruise playing Tom Cruise. Is it just me or does it seem like all of his parts in the last decade have all blended together? Not to say that he is a bad actor but it would be nice to tell this character apart from his other parts. Morgan Freeman who plays Beech was a wasted opportunity. I love Morgan Freeman. If I could pay him to follow me around everywhere and narrate my whole life I would. He is not in this film enough. He is only there to tell Jack what the deal is when he discovers the truth. That is about it. Olga Kurylenko plays Jack’s partner Victoria. The way she delivered her lines way dry and cold. You could call her a robot. There was nothing about her character that made me want to like her, though I get the feeling that I was suppose to. Andrea Riseborough plays Julia, the stranger that Jack finds. She was the best of the two female leads but her character felt predictable and was not given much to do.

I give this movie a 3 out of 5 stars all of which go to the production design and special effects. Koninski is definitely a visual director. The general population will like this as the first summer action flick of the year. But for those of you like myself who like your sci-fi to be more deep go watch any of the films that inspired this film.

As I said before there is a major plot point in the  film much like another film. I realize by telling you what it is I will be spoiling that film too. But hey what are you going to do? The film is Moon. If you have seen Moon you might have guessed the plot point is that Tom Cruise plays a clone. He even fights his clone somewhere just after the midpoint of the film. While in Moon Sam Bell has memories of life on Earth, Jack Haper from Oblivion has no memories prior to doing drone repairs. Only dreams depicting his past seep through. The thing that made me call it at the beginning of the film was that in both films both main characters have two more weeks of their mission before they can leave.

This is just a nit pick but, in Oblivion humanity has moved on to Titan, a moon of Saturn. Why go there? Would not Mars be warmer? It is closer to the sun and seems like it would be a better place to consider terraforming. Like I said, just a nit pick.