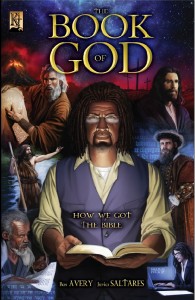 Many disparage comic books as being low brow literature that plays to the lowest denominator.  Others look at comic books as a truly unique American art form.  I tend to be part of the later, and have used comic book stories to teach Biblical truth lifetimes ago as a youth pastor.

Ben Avery’s script for The Book of God is well researched, well written and highly enlightening.  Avery clearly deeply researched his topic, though he does not claim to be a scholar.  He provides accurate context to the books of the Bible and makes it clear where issues like authorship are in debate.  I had hoped to catch him falling into the trap of reporting that the Jewish historian Josephus claimed that Jesus was the Christ.  Instead he pointed out the issue and the inaccuracy of any Christian claims that Josephus would have made this statement.  Additionally, it is well written.  The text is concise but accurate and informative.  He weaves in terms from non-English languages seamlessly and educates his audience to their use.  I have read much longer volumes that have presented similar content, and I appreciated how much information Avery was able to convey with such few words.

I enjoyed Saltares’ images, which mix a modern man, the narrator, into the historical images.  I was never distracted by this mixing of eras.  Additionally, he depicts multiple eras successfully from ancient history to our modern era.  I continually came back to the representation of the narrator.  The image of the African-American narrator added to the text for me.  He is dressed and represented in a balanced fashion where he both felt authoritative and “cool”.  The narrator is the younger professor that you probably wanted to hang out with during your college days.   I think that this depiction would have an impact on teens and young adults, who likely would not want to preached at by an older professor figure. 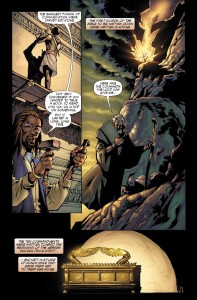 The big question I asked myself is how would I use The Book of God?  Back in my youth pastor days I was often asked to provide youth centered studies as alterative programming.  One of those was a Bible Basics study.  If I had The Book of God available I would have selected this title, instead of whatever I actually used.  Additionally, I can think of adult friends who do not enjoy reading that this title could be a good suggestion for, since it is concise, has multiple means of communicating its message and is an intelligent read.

I really enjoyed The Book of God.  It is not my typical comic title, being Ninja free, but it is very successful of fulfilling its goal of providing truth about the Bible.  It is well written, well researched and well presented.  And it helps show how comic books can help intellectually stimulate readers.  Like me, you will probably forgive Ben Avery for a lack of ninjas and appreciate the message that it does present.

4 comments on “Review – The Book of God: How We Got the Bible”