That next month’s Star Trek Into Darkness features acts of terror is not news, of course, but I can’t help watching the scenes of make-believe urban violence showcased in the film’s third (and presumably final) trailer without thinking of yesterday’s all too real violence in the streets of Boston.

As I write this post, no one knows who is responsible for the Boston Marathon bombings. Ignorance, however, never stops immediate calls for vengeance, as even casual scans of social media today reveal. Fortunately, I’ve also seen plenty of calls to prayer for the victims, as well as praise for the first responders, physicians, and good Samaritans who were on the scene or in nearby hospitals, from Christians and other people of goodwill alike. Please do pray for the people of Boston, as well as those in any city anywhere in the world who face violence.

When this new Star Trek bows at the box office, I suspect our nation’s latest encounter with terror will inform how viewers receive such moments as Kirk exhorting his crew to “go get this [s.o.b.]” Out of context, it’s impossible to know whether Kirk is, as it seems, issuing a heated call for payback–which have seldom found a place (on heroes’ lips, anyway) in previous Trek–or a fervent call for true justice, which would be much more in line with the Federation’s ideals (let alone biblical morality). I suspect the former, but we shall see. 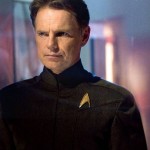 This trailer twice features Admiral Pike’s line, “I believe in you, Jim.” We haven’t heard this bit of dialogue before. Again, context will be key; but here, it serves to soften the rebuke of Kirk that precedes it, featured in previous publicity. Bruce Greenwood’s Pike was a highlight of the 2009 film, and I’m glad he’s returning for this second adventure. He seems to be serving as Kirk’s mentor, offering not only the wisdom of experience but a hope for Kirk’s future. He is the apostle Paul to Kirk’s Timothy, confident his protégé will live up to his (God-given) potential. Have you been fortunate enough to have a “Captain Pike” in your life? If so, who?

If Benedict Cumberbatch’s John Harrison is the new continuity’s version of Khan (and not only his physical prowess but also the starship stand-offs we witness here, more than a little evocative of Star Trek II, make me think this likely), then we are obviously still in for an exciting and visually spectacular ride. I still contend the filmmakers should be taking advantage of the “Abramsverse” to really and truly go where no Trek has gone before, but I accept that they may see the realities of the marketplace demanding a more cautious approach. 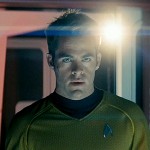 Finally, the trailer makes me think that the much-speculated-about character death, should it come to pass, will be, not Spock (as a Trek II template would seemingly demand), but Kirk himself. The text cards read, “Beyond darkness comes greatness.” Kirk’s increasing isolation throughout

this trailer, considered alongside Pike’s repeated statement of belief in him, as well as Harrison’s haunting question from previous trailers–“Is there anything you wouldn’t do for your family?”–leads me to wonder if Kirk’s apparent character arc will take him from the free-wheeling, devil-may-care, Kobayashi Maru-beating swashbuckler of the ’09 film to a man whose “solution” to a no-win scenario involves him demonstrating for his crew, his friends, that great love about which Jesus spoke–and which, of course, he himself demonstrated for us.

Again, we shall see! What do you think of the trailer? Are you excited for Star Trek Into Darkness?