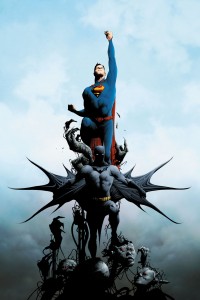 Superman and Batman are the Reese’s Peanut Butter Cup of superheroes: two great tastes that taste great together. From the days of World’s Finest in the 1940s through Jeph Loeb and Ed McGuinness’ widely acclaimed run on Superman/Batman in the early 2000s, writers and artists have been dreamed up joint adventures for the Man of Steel and the Caped Crusader, to great effect. Does DC’s new Batman/Superman—written by Greg Pak, drawn by Jae Lee and Ben Oliver—continue that terrific twosome tradition?

Does the issue represent Batman and Superman well?

Dan:  Yes, I feel this comic does a great job handling these icons, setting up an interesting contrast in character. What struck me was that Bruce Wayne stays in a role he has created for himself. He presents to Clark Kent a very false face, and lets the reader share in the “joke” that Wayne is playing on the noisy reporter because after years of reading Batman stories you know that the impression Bruce is displaying is not his real face. One of my favorite lines after the Wayne/Kent meeting is, “You’ll have to excuse me, Kemp.”  This is classic! Wayne is Batman; he knows what Kent’s name is and has already evaluated his potential weaknesses (he would be wrong), but it is a classic fake face that shows how deep Wayne has taken on his character.

Mike: I think Batman fans will be extremely pleased with issue #1. We meet Batman early in his career, still cultivating his unmasked persona as a “rich boy slumming on the east end” of a breathtakingly foreboding Gotham City. Lee’s lines and June Chung’s colors immediately evoke the Dark Knight’s grim world of swift, urban justice. Splash page 10, in which Batman crashes through a window to apprehend Catwoman, is one of the finest pieces of Batman art I’ve seen recently, screaming out to be emblazoned on t-shirts and posters—it’s that iconic. Pak seems to have a direct line into Bruce Wayne’s psyche, and he shares it with us in terse, noir-like thought balloons and dialogue. There’s indeed a lot here for Batman fans to like. (Batman’s so cool, he even has personal force fields!)

Superman fans, on the other hand, may not rejoice as much. No question, Pak understands the character. On page 1, for example, as Clark Kent arrives in Gotham, Pak treats us to an interior monologue that perfectly captures the character’s voice. And Clark’s actions—trying to break up a kids’ fight, only to be given grief by both a young bully and Bruce Wayne as a result—faithfully represents Superman’s clear-cut, no-nonsense moral code, and the reception it often gets. Pak and Lee also expertly convey the raw power of Superman (still in his jeans, t-shirt and cape days of Grant Morrison’s recent Action Comics run); splash page 13 would make a worthy counterpart to that Batman poster I suggested. But when an out-of-the blue time travel twist emerges, readers must struggle (and this reader never succeeded) to figure out just what’s going on. This “timey-wimey” confusion obscures any further attention to Superman’s characterization; in fact, he is acting out of character—due to the villain’s influence, to be sure, but ultimately a development that makes this issue a disappointing debut from the Super-side of things.

Does the issue conform to canon?

Dan:  Yes, this is real simple. This is part of DC’s New 52 and Batman/Superman #1 is intended to be canon-forming.  Yes, with these characters much of what we know about them pre-New 52 is still in effect, but this is clearly intended to be important and canon shaping. There are two scenes for canon that are key. We have the first meet-up between Bruce Wayne and Clark Kent and the first meeting between Batman and Superman. This second meeting is far from a happy occasion as neither hero knows of the existence of the other. Superman assumes a man in a giant bat costume must be a villain! Batman figures out all the different ways this new opponent could kill him.

Mike: The story is clearly set in the “five years ago” time frame of the New 52. As for what exactly is going on in the latter half, however, I have no clue. Matters very quickly become muddled. 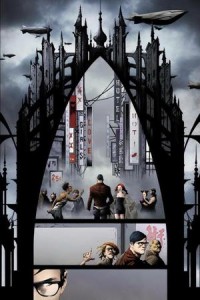 Mike: Jae Lee’s Gotham City. Not since Tim Burton brought his vision of Batman’s stomping grounds to the screen in 1989 have I seen such a gloomy and gorgeous Gotham, with soaring arches, sinister shadows, and imposing atmosphere at every turn. Even the trees are wonderfully, creepily twisted. The art communicates the peril at the heart of Gotham’s life, and is by far the most striking aspect of this issue.

Dan:  Oh there is a lot more here to like! First, I, too,  really like the art by Jae Lee. It has a gritty darkness, my best description, that feels like a Batman book should be. I found it perfect for this story, despite the fact that I think a Superman book should have a cheery feel. But I am coming to this title as a Batman book.

Mike: Frankly, I think the creative team is, too, which is one reason it suffers.

Dan: Ok, Poteet, pipe down—not your turn! As far as not knowing exactly what is going on here—Is this a time travel story?  Is this a hallucination?  Is this a possession?  Is this a combination of several things?—I’m okay with that. There is a background switch that emerges in the middle of the book that has me disorientated.  Now usually this would be a bad thing.  But for this story it actually has me considering the next issue so I can find out next month instead of 9 months for now what is going on.

Mike: Well, Dan, you make a sound point. It might be unfair of me to say so, since—in our oft-repeated caveat—this is just the first chapter in a longer story (what other narrative medium, I ask you, gets judged in such a way? TV series, perhaps?)—but the second half of the issue is utterly confusing. I don’t mind challenging narratives, but in my judgment Pak doesn’t deliver enough hooks to help readers follow the flow. What I could grasp is that Superman is in jeopardy (thanks to—say it with me, kids—Kryptonite), and that Batman will have to rescue him. That’s a legitimate story to tell, but I don’t think it’s a good story to tell for the kick-off issue of a team-up series. Perhaps the tables will be turned before the arc is done, allowing both principals a chance to shine.

Incidentally, the slight “tweak” to Superman’s origin story—the Kents die in an automobile accident, giving Clark a double dose of the old “for all my powers…” guilt to motivate his superheroics—was interesting but unnecessary. I suspect Pak wrote it to make Superman hew more closely to the Batman model of beginnings, yet the differences between the two characters, including the differences in why they do what they do, are precisely why they make such a great team! Do both men really need to be working out issues of unjustified guilt over their parents’ deaths?

Dan:  Aquaman #21 costs $2.99 for 32 pages. Batman/Superman #1 costs $3.99 for 32 pages. So my question is simple: why an extra buck? I guess it is because they can get the extra dollar for this book.  But really, I would like a little more bang for the extra greenbuck, DC!

And I am tired of reviewing DC books. Come on, Marvel, step it up so you can make the pages of Issues of the Day!

Do you see spiritual applications in the story?

Dan:  In parallel frames we see shots of Clark Kent and Bruce Wayne with their fathers.  These images make it clear that the moral compasses of each man were established by parents.  As Proverbs says,

Train up a child in the way he should go; even when he is old he will not depart from it (Proverbs 22:6, ESV).

This verse plays out perfectly here.  In the case of Clark Kent, he was raised to respect truth, justice and the American Way and as an adult he lives out those values as both a reporter and a superhero. Bruce Wayne was taught to protect the innocent and his city. I think it is safe to say what makes the character of each of these men is not super power or gadgets, but being raised by parents who instilled strong values in their children. 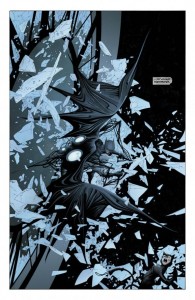 Mike: Good insight, Dan. Mine had to do with raising kids, too, funnily enough. Batman’s comment on that terrific splash page—“That’s the problem with children today—not enough nightmares”—struck me as saying something profound. The Dark Knight is referring to a child who gets too close to Catwoman, seeing only the villainess’ feline get-up; the inference is that the child is too naïve, too innocent, for her own good. Now, don’t get me wrong: I’m all for the naiveté and innocence of childhood! I’m not advocating making kids grow up too quickly. But I do wonder if sometimes we well-meaning adults don’t protect our kids a little too much—not from threats to their physical safety (of course we want to protect them from those), but from the “nightmares” inhabiting this world.

Again, I’m a little reluctant to make this point. I fear I sound like some kind of bad parent. And the world contains a lot more than nightmares. But they are there, and I wonder if Christian faith doesn’t give us a good model for confronting them head-on. The Bible praises God for all God’s goodness, and celebrates all that is good about God’s world, and lifts up the moral virtues to which God calls us—but Scripture also refuses to shy away from the “shadow side” of creation (theologian Karl Barth’s phrase), and warns us “against the cosmic powers of this present darkness, against the spiritual forces of evil in the heavenly places” (Eph. 6.12), and is brutally honest about the vice that lurks within fallen human beings: “The heart is devious above all else; it is perverse—who can understand it?” (Jer. 17.9). We are trapped in a nightmare, a nightmare of humanity’s own making: our sin has separated us from God, and the power of Sin is rampant in the world. This is not the way God intended the world to be! God did not mean for us to live in Gotham City!

We do have to talk with our kids about sin in age-appropriate ways, of course, and we shouldn’t do so for the purpose of simply trying to frighten them! Again, Scripture shows the way: sin isn’t ever really its subject per se; it usually talks about sin in order to talk about how God has delivered us from sin in Jesus Christ. But we can’t shield our kids from this topic completely, either. Children’s Bibles are fine, but they usually don’t give the whole story because they don’t contain enough, or usually any, of the “nightmares”—the darkness out of which we have been called, into God’s marvelous light (1 Peter 2.9).

Will you be sticking with this series?

Mike: I might read the collected version, but, no, I won’t be buying this book on a monthly basis. I would have if it had maintained the narrative clarity of its first half, but its second half just left me cold.

Dan:  Currently, I am thinking I would probably get the next issue. I think I will finish this story arc and then revaluate. I figure the arc will cost me $16 to follow monthly, but free to borrow the trade so it is a tough decision that I will probably torture myself with until I buy issue #2. If I had to pick between Batman #22 and Batman/Superman #2, at the moment I am leaning towards the team-up book.