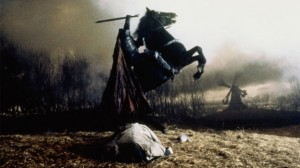 Washington Irving’s “The Legend of Sleepy Hollow” (1820) is often characterized as a classic ghost story, but there’s actually nothing supernatural about it. It’s the tale of how scrawny, self-important, socially inept and superstitious schoolmaster Ichabod Crane gets his comeuppance thanks to a mischievous ladies’ man masquerading as the feared Headless Horseman of local lore.

So Fox’s new paranormal procedural Sleepy Hollow must borrow from other sources. This week’s pilot episode was a heaping helping of The X-Files—a man seeking supernatural secrets (“the connections are all around us”) teams up with a skeptical but sympathetic woman (not an FBI agent, but she came this close to joining the Bureau)—with a generous side order of National Treasure (“The answers are in Washington’s Bible!”) and a light sauce of Elementary drizzled over everything (he’s British, she’s American).

Still, I am taken with the show. I think, somewhere beneath these similarities to other properties, is an entertaining and potentially very interesting drama that may yield insights into our country’s current sense of itself. 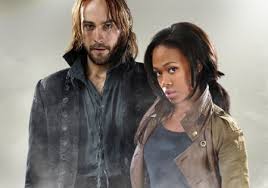 Sleepy Hollow’s Ichabod Crane (played by Tom Mison) shares little with his literary counterpart beyond the name. This Ichabod was an Oxford history professor who came to the American colonies to fight for the British crown but ended up switching sides. While fighting a mysterious mercenary in the pilot episode’s prologue, Ichabod is fatally shot. He decapitates his foe before falling dead next to him. Over two centuries later, Ichabod returns to life, crawls out of the cave where he was buried, and stumbles into the present day.

But Ichabod hasn’t come alone. He’s alive because the mercenary he beheaded rides again. As you’ve guessed, he is the Headless Horseman. You may not have guessed the premise’s clever departure from Irving’s story: he’s also one of the Four Horsemen of the Apocalypse. The Horseman is in search of his skull, which was secreted away by one of two ancient “covens”—one (to which Ichabod’s wife Katrina belonged) fighting for Good, the other (whose members are as yet unknown) for Evil—and which, if found, will restore him to full strength, paving the way for cataclysmic destruction and doom, with the village of Sleepy Hollow as ground zero.

Meanwhile, police lieutenant Abbie Mills (Nicole Beharie) is investigating the beheading death (at Guess Who’s hands) of Sleepy Hollow’s sheriff. Abbie discovers his cache of cold case files. They document unexplained phenomena from colonial times to the present, not only in Sleepy Hollow but also up and down the East Coast. Abbie knows one of those cases well: as a child, she and her sister Jenny got lost in the woods and blacked out after seeing a demonic creature. As a result of that trauma, Jenny’s now “in and out” of mental institutions. Abbie’s experience makes her more compassionate than most toward the new stranger in town who insists he fought in General Washington’s army, even if she isn’t ready to believe his biblically proof-texted explanations of strange goings-on.

During the first episode, Abbie and Ichabod forge an unlikely friendship and sally forth in search of the truth that’s out there… Whoops. Sorry. I caught myself whistling that catchy, classic theme by Mark Snow. Again, comparisons to The X-Files are unavoidable for now, but what I hope will set Sleepy Hollow apart are the themes it touches on from Christian theology and American “civil religion.”

Now, Sleepy Hollow isn’t some ponderous, pretentious discourse on religion or politics. The pilot was fast-paced and lots of fun, especially when the script plays with Ichabod’s reactions to his cultural and temporal shock. For example, as Abbie and Ichabod are driving, he sees a Starbucks that, in his day, was a livery stable, then spots another seconds later. “How many are there?” he asks. Abbie replies, “Per block?” Ichabod hazards the most reasonable explanation he can think of: “Is there a law?” This is nice fish-out-of-timestream comedy, and the writers would do well to give us more. Don’t let Ichabod acclimate too quickly to 2013, or Sleepy Hollow will lose some of the modest freshness it has going for it.

But it would still have a quintessentially American take on Christian eschatology. 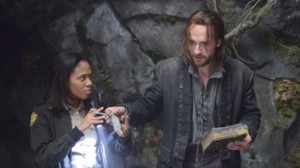 For starters, Washington’s Bible has as its last book the notorious but non-existent Book of Revelations! I cringe whenever TV and film characters don’t know that the title of the New Testament’s final document is singular, not plural. I don’t think I’m just being persnickety. The book’s dizzying and diverse visions and prophecies and symbols and hymns make up one “revelation of Jesus Christ” (1.1), a single, unified message of encouragement and hope.

When we read Revelation instead as “a series of revelations,” we risk reading it without much reference to Jesus, the risen Lord who is both “the Lion of the tribe of Judah… [who] has conquered” (5.5) and the Lamb “standing as if it had been slaughtered” (5.6), the “living one” who “was dead, and see… [is] alive forever and ever; and… [holds] the keys of the Death and of Hades” (1.18). Christ’s conquering of death by death, his victory over evil by sacrificing himself to it, his calling Christians to endure and persevere by following in his way—these core truths must inform any faithful reading of the book.

Ichabod interprets “Revelations” without reference to Jesus, at least so far. He tells Abbie the Bible “speaks of two witnesses, brought together for a seven-year period of tribulation to defend humanity from the forces of hell. Their battle is prophesied to ordain the fate of the world on Judgment Day.” Ichabod concludes he and Abbie are “called” to be these witnesses.

Revelation 11.1-10 does say God will give two witnesses “authority to prophesy”—to proclaim God’s message to a sinful, rebellious world—for three-and-a-half years, if we take that count of 1260 days literally, while “wearing sackcloth,” until “the beast that comes up from the bottomless pit will make war on them and conquer them and kill them.” The passage hardly seems to suggest these two witnesses are beating back monstrous forces of darkness with action-packed derring-do. They “conquer” evil as all God’s faithful witnesses (the Greek word gives us “martyrs”) in Revelation do: by patiently enduring trial and persecution, even to death.  Since Sleepy Hollow is Hollywood fiction, Abbie and Ichabod may well turn out to be “the two witnesses” in that story’s world; it could be exciting to watch what happens. In real life, however, reading Revelation for insight into our struggles without remaining focused on what Christ has already accomplished in his struggle can lead us astray. We may forget that what looks like victory in God’s eyes very often looks like defeat in the eyes of the world.

An Exceptional Struggle for an “Exceptional” Nation? 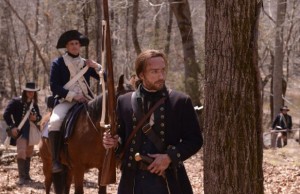 Ichabod’s interpretation isn’t surprising, however, given his understanding of the American Revolution. General Washington told Ichabod it “wasn’t merely a war for the future of our country; it would determine the fate of every man, woman, and child on earth.” No wonder Ichabod defected!

One essential tenet of America’s “civil religion”—the meaning-giving myth (not falsehood or lie, but overarching, organizing narrative) that bolsters our national identity— is that the birth of the United States marked a turning point in world history. Of course, it demonstrably did; however, the American narrative means more than the Revolution’s factual fall-out. It refers to the idea that America was elected to fulfill the role of light to the nations, to live as “that shining city on the hill.” The idea is not new. According to the folks over at h2g2, “Patriot millennialists urged their audiences to support the revolution, warning that British victory would spell the ultimate triumph of the anti-Christ and despotism, whereas American independence would lead to the arrival of Christ’s millennium.”

The subject of “American exceptionalism” has garnered headlines lately. How fascinating that, in this moment in our history, as we wrestle with questions of our country’s responsibility in today’s morally and ethically complex geopolitics, a TV series is dramatizing the idea that America, from the beginning, has an “exceptional,” pre-ordained role to play as the arena of an eschatological battle between darkness and light, death and life. Is it true? Americans, including Christians, disagree, and my hope is Sleepy Hollow will stir up that continuing conversation.

I’ll be watching next week. If I enjoy the second episode as much as I did the first, I’ll be tuning in regularly to watch this intriguing story of American identity struggle to break free from a formulaic framework, even as Ichabod Crane clawed his way free out of his grave.

30 comments on “Hellmouth on the Hudson: “Sleepy Hollow” (TV Review)”