I’m still enjoying Sleepy Hollow, but wouldn’t recommend it as a Bible study (of course, it’s not claiming to be one). 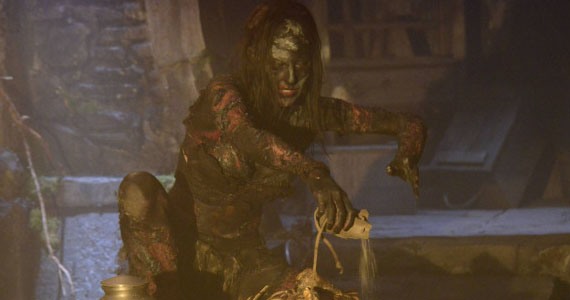 For starters, consider the name of this week’s wicked witch, Sarilda of Abbadon. Ichabod tells Abbie that “Abbadon” is a word from “Romani-Greek.” That’s a real language, but “abbadon” is a Hebrew word meaning “destruction.” In Revelation, when the seer John writes about a plague of demonic locusts to be unleashed upon the earth, he notes, “They have as king over them the angel of the bottomless pit; his name in Hebrew is Abaddon,and in Greek he is called Apollyon” (9.11). The Greek version of the name may mock Apollo, deity of not only the sun but also pestilence, and with whom Emperor Diocletian, an  early persecutor of the church, identified himself. It’s a fitting word to link to Sarilda, but the destruction she causes—the unnatural immolation of Mr. Furth, the brief hostage crisis in the Hemmington home—is nothing next to what John describes.

Sarilda’s rampage also seems directed entirely by Sleepy Hollow’s “big bad,” the horned demon (Satan?), as opposed to being somehow within God’s sovereign purpose, as are Revelation’s catastrophes. This series is shot through with a Manichaean mindset. Light and darkness, good and evil, are equally matched, and the ultimate outcome of their struggle is in doubt. Such duality makes for good TV drama, but bad Christian theology. Revelation is often a cryptic text, but it isn’t a code to be cracked. Its central message is an unambiguous, ringing affirmation of God’s ultimate victory: “Hallelujah! For the Lord our God the Almighty reigns” (19.6).

Sleepy Hollow quotes Revelation a lot, but doesn’t proclaim its central hope. I don’t demand it should, but the need for some hope to fortify its characters doesn’t go unacknowledged. As this episode is winding down, the ghost of Sheriff Corbin tells Abbie, “The only person who can tell you [who you really are] is you. That’s what faith is, honey.” 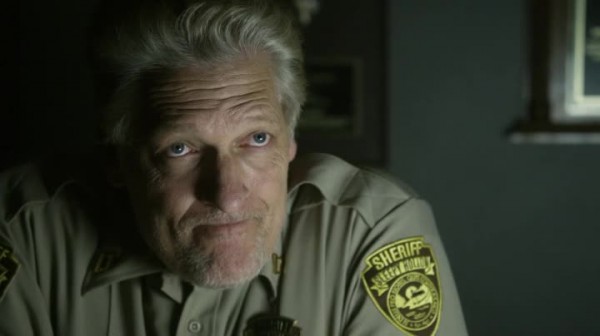 Is Corbin right? Maybe he means faith in oneself. Self-confidence and a refusal to live in fear are good, essential qualities. But are they enough? Again, Corbin may not be suggesting they are. He may mean we have to keep moving forward in life, that we can’t remain mired in our past, that we must set goals. All true. But telling ourselves who we really are… well, have you got that figured out yet? I don’t.

In the real world, as in Sleepy Hollow’s fictional one, objective, empirical, completely irrefutable evidence that life has meaning and purpose can be hard to find. Our perceptions are limited; our life experiences are often contradictory. How can we make authoritative claims about who we are and what we’re meant to do?

The author of Hebrews claims that faith “gives substance to our hopes and convinces us of realities we do not see” (11.1, Revised English Bible). It comes to us from outside, as a gift. Part of that gift is true knowledge of ourselves in relationship to God, by whom we are “fully known” (1 Cor. 13.12; see also Psalm 139.1-6). I don’t pretend this affirmation clears away all questions—but it points me for answers in what I believe is a surer direction.

On the Road Together

This episode did make some meaningful affirmations I can second.

Sarilda’s story illustrates, for example, that evil is unoriginal. It can’t make or do anything on its own; it can only ape and distort what God makes and does. The return of Sarilda’s spirit to flesh mocks the Incarnation, and it’s a resuscitation at best, no true “resurrection” to eternal and abundant life. Her unholy vocation to lead the Four Horsemen’s vanguard is a paranormal parody of John the Baptizer’s calling to “prepare the way of the Lord” (Mark 1.3)—a calling we, the Lord’s disciples, waiting for his return, share.

But my favorite insight in “Blood Moon” came near its end. Throughout the episode, the chemistry between Abbie and Ichabod impressed me. These two people respect and support each other. Abbie is particularly supportive of Ichabod as he adjusts to modern life. (I like how she left post-it notes around his motel room to instruct him in such day-to-day basics as turning on the coffee pot and taking a shower!) But Ichabod isn’t so absorbed by his own situation that he’s indifferent to Abbie’s continued grief over Corbin’s death. They’re even comfortable enough with each other to share light-hearted banter. When Abbie asks if the plan is to “burn [Sarilda] to the ground,” Ichabod replies, “With great enthusiasm.” “Jolly good,” says Abbie, mimicking Ichabod’s British accent, to which he responds, “That was not an accurate impersonation.” Great stuff! These two are becoming good friends, and, as Ichabod tells Abbie near the episode’s end, “I do take comfort knowing that the strange road we find ourselves on can only be traveled together.” 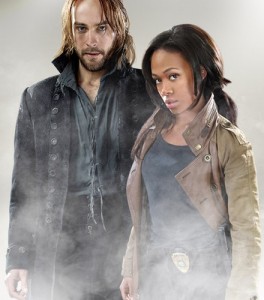 What a wonderful way to talk about the blessing of friendship. Our roads won’t take us past undead, ash-stealing witches, but we all sometimes find ourselves face-to-face with the strange and sinister, the perplexing and painful, the difficult and dark. As Ichabod says, there is comfort to be taken—and given—in not going those roads alone. Looking again to Hebrews, the author tells us we should keep “encouraging one another, and all the more as [we] see the Day approaching” (10.25). We can do that because we ourselves have been encouraged by the One who has traveled the same roads we do as one of us, who walks beside and goes before us still, promising that where he now is, we will someday be also.