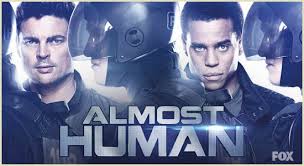 The latest series from über-executive producer J.J. Abrams puts two charismatic leading men—Karl Urban (whose pitch-perfect “Bones” McCoy is widely acclaimed as one of the best parts of Abrams’ Star Trek movies) and Michael Ealy (whom I’ve not seen before, but whom other genre fans might recall from FlashForward or Underworld: Awakening)—into the midst of what feels like a hastily contrived mash-up of Blade Runner; The Caves of Steel and Isaac Asimov’s other Lije Bailey/R. Daneel Olivaw novels; I, Robot (the Will Smith movie, this time); and every “buddy cop” movie you’ve seen since Lethal Weapon.

Set a few decades from now, when law enforcement works side-by-side with advanced humanoid robots to fight an ever-increasing crime rate, Almost Human tracks police detective John Kennex (Urban) as he returns to the force after a more than two-year absence. A deadly ambush he alone survived, planned by a girlfriend who betrayed him, left Kennex physically, mentally, and emotionally traumatized. He’s having trouble reentering life, as seen by both his clandestine visits to a memory recall technician and his psychosomatic inability to accept the bionic leg that replaces the one he lost.

Back on the beat, Kennex (his name sounds kind of, but not quite, like “connect,” which Kennex is having trouble doing—get it?) is paired with Dorian (Ealy), an android with issues of his own. He has the cool android capabilities you’d expect (no need to send a blood sample to the lab when Dorian can just inject it into his own neck and give you instant analysis), but is comfortable interacting with humans (he can deliver his information in “colloquial mode”) and badly wants to be a police officer. His model predates the cold, logical “MX” models currently in use, and is known for being prone to emotional outbursts. Dorian’s kind of like Lore from Star Trek:The Next Generation—retired from use because he was “too human”—only good, not evil. As Kennex’s captain tells him, Dorian is “special… just like you.” See? They’re both damaged goods. They’re both “almost human.” Get it? 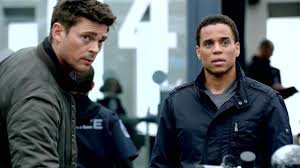 Most of the show feels just that predictable. You know Kennex won’t want to be paired with an android (in fact, the pilot’s one genuinely surprising, and very funny, moment came early on, when Kennex literally shoves the MX partner he’s first assigned out of their moving car, into busy traffic), just as you know you’ll see the initial glimmerings of an “unlikely friendship” by the hour’s end (“Call me John”). Almost Human hits its plot and emotional beats in a professional but perfunctory way.

One subplot that hints at something deeper is Kennex’s prejudice toward Dorian. He continually refers to Dorian as a “synthetic,” a term Dorian regards as a slur. At several points, Dorian insists that Kennex treat him with respect, and tries to make Kennex understand his own motivations and hopes. Given that Dorian is played by an African-American actor, Almost Human could choose to use the characters’ relationship as a science fictional exploration of race relations. Ealy and Urban are surely capable of creating a rich interpersonal dynamic that would shine light on our society’s continuing struggle toward acceptance and equality (and not just in matters of race).

If Almost Human pursues that course, however, someone will have to let me know, because I didn’t find enough of value in the pilot to keep me interested. But I may go back and re-read The Caves of Steel sooner rather than later.