Like Robin and the Doctor in their bow-and-arrow battle, the Doctor Who creative team is hitting one bullseye after another. (Let’s just hope this season doesn’t share that archery target’s fate and blow up in the end!)

“Robot of Sherwood” is a winning blend of swashbuckling and silliness. I’ve never shared Clara’s fascination with Robin Hood, but Mark Gatiss’ sparkling script and the cast’s whole-heartedly enthusiastic performances made me a very merry man.

“Stories Can Make Us Fly” 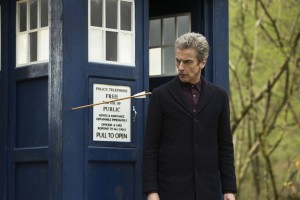 I appreciated this episode’s attention to the power of story—a theme Doctor Who has explored before, but one that can’t ever be exhausted. What a delight to see the Doctor, who was so certain he’d uncovered the truth behind the myth of Robin Hood, slowly realize the tales about the Prince of Thieves are true! No, they don’t present the whole story—not one word about ruthless, disintegration ray-shooting robots—but they preserve the core truth: In dark days when wrongdoers had the upper hand, one man stood up to be counted, and defended what was right.

Were you or I somehow able to visit late Sherwood Forest circa A.D. 1190, we wouldn’t think we’d stepped into a storybook. Although intriguing candidates for the historical Robin Hood exist (Robert, Earl of Locksley’s not the only one), the Doctor is, in our non-televised world, essentially correct: “No such thing as Robin Hood.” But in believing the Robin Hood stories therefore don’t matter, he’s still wrong. Stories shape beliefs, character, societies, and the course of history. We’d better be sure they’re good ones! Robin Hood’s story is good because it affirms such values as courage, loyalty, compassion for the poor, and a commitment to justice. As Robin points out to him, the Doctor’s story is a good one, too, for similar reasons.

Christians believe the best story is the story of God living among us in Jesus of Nazareth. Some people contend Jesus is no more real than Robin Hood. I’ll grant that the biblical gospels aren’t modern historical biographies. Were we somehow able to visit Palestine circa A.D. 33, we probably wouldn’t find all the details as described in Scripture (although I bet we’d find that most are). But I believe the Bible preserves the core truth: that Jesus was crucified and raised from death “for our sins, and not for ours only but also for the sins of the whole world” (1 John 2.2), and that he is and forever will be Lord. And this story gives me hope as no other does, because it promises it isn’t finished, but will culminate in “a new heaven and a new earth” where God is once again living among us (Revelation 21.1,3). Whenever our stories correspond in some way, knowingly or not, to God’s Story, they are good, and deserve to be told and re-told forever. “May those stories never end,” indeed. 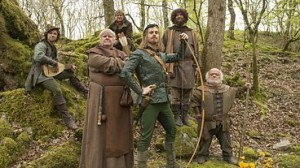 “Robot of Sherwood” is the funniest hour of Doctor Who we’ve seen in a while. Robin and the Doctor’s ridiculous and magnificent sword-and-spoonfight (“It’s only right that his weapon of choice is a spoon,” Gatiss told MTV) signals that this adventure must be undertaken with a smile. The Doctor, “gray old man” that he currently is, doesn’t care for the unwavering jocularity and his band of brothers—“Why are you always doing that? Are you all simple or something?”—but, for most people, Robin Hood’s laughter “in the face of all” is part of his appeal.

Life throws a lot at us that can make us weep. Even Robin’s laughter is, as Clara recognizes, born out of sadness: his heartbrokenness over his separation from Marian. But he validates the wisdom of ancient Israel’s sages: “A cheerful heart is a good medicine, but a downcast spirit dries up the bones” (Proverbs 17.22). We need laughter. It doesn’t make all sorrows easier to bear, but it can strengthen and sustain us through even very tough times.

Laughing can also be not only a healthy coping behavior but also sound theology. After all, Christian faith is founded on a joke! Jesus’ Resurrection is God’s great “practical joke” on all the powers that diminish and destroy human life: sin and evil, Satan, death itself. One ancient Easter sermon, traditionally attributed to St. John Chrysostom, describes Hell as “in turmoil” because, in raising Christ, God has “mocked” it:

Hell took what it saw, and was overcome by what it could not see.

O death, where is your sting?

O hell, where is your victory?

Because God gets “the last laugh” on the devil, we also can laugh in his face. Our risen Lord has freed us from his power, from the tyranny of sin, and from the finality of death (see Hebrews 2.14-15).