The recent flurry of casting announcements from CBS’ impending Supergirl series—Melissa Benoist as the Maid of Might herself, and Mehcad Brooks as Jimmy Olsen—made me realize it’s been a while since I checked in with Krypton’s Last Daughter.

I miss her! She kept her spot on my incredible shrinking monthly pull list longer than most other books. Kara has so much of what’s cool about the Superman mythos—the awesome powers, the extraterrestrial heritage, the mild-mannered secret identity—but, being younger and less experienced than her larger-than-life cousin, is more fallible and more relatable. Frequently, she’s more fun, too.

Wanting to find out what she’s up to in DC’s New 52, I picked up her a recent issue, Supergirl #37. (Spoilers ahead!) 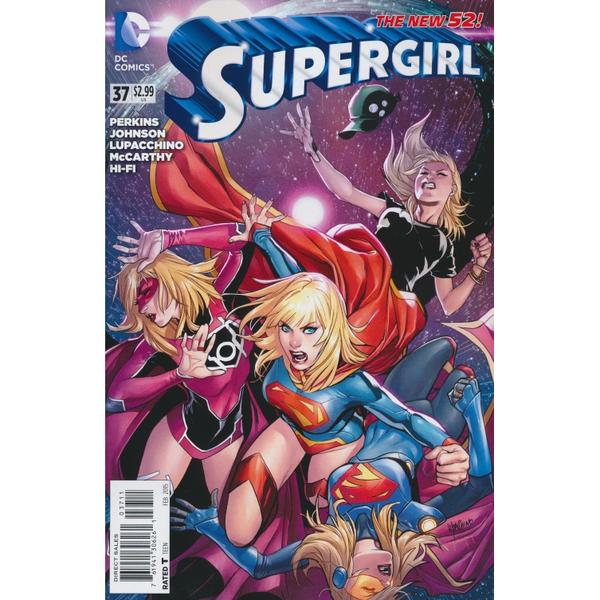 Our heroine is attending the interstellar equivalent of Hogwarts, with dashes of the Vulcan Science Academy and Ender Wiggins’ Battle School thrown in. Crucible is a training school for would-be superheroes from a plethora of alien planets, and Kara’s been sorted into assigned to a study group consisting of three reimagined versions of long-time DC cast members (although I’m personally only familiar with two of them): Maxima (pre-reboot, a venerable Superman foe and love interest), Tsavo (the one I didn’t recognize; here, he’s a big, blue cross between Beast of X-Men and Zeb of Star Wars Rebels, but apparently he, too, has loads of DC lore behind him), and Comet (who shares a name with Supergirl’s Silver Age horse and sometime boyfriend—I kid you not).

Most of the issue tracks Kara and her classmates as they prepare for lives as their worlds’ protectors, although we also learn of some Crucible faculty’s secret plot to clone an army (shades of Kamino) with Superboy as the template. (Yes, Superboy, who’s off having adventures, I presume, in some other book I have no interest in. This subplot seems to exist solely to set up an obligatory crossover event. Sigh.) At the issue’s end, however, Tsavo and the team are sent to Tsavo’s civil war-wracked home world of Ngo. There, they find Tsavo’s parents, Ngo’s king and queen, under attack from an army of rebels led by Tsavo’s older brother. On the unfortunately timely final splash page, Tsavo’s brother holds a wicked-looking blade to the king’s throat, threatening to conquer not only Ngo but also Crucible, the school that expelled he and his allies.

While my summary teasingly highlights some familiar tropes dotting the plot, this issue was entertaining enough to earn several re-readings. Writers K. Perkins and Mike Johnson spend a decent amount of time developing Kara’s character. Crucible gives her, as she says, a much-needed “slice of normal life.” It also exposes her lingering insecurities about her place in life by placing her among innumerable “perfect specimens.” (Her unresolved sense of self is dramatized in the cover scene, in which she battles alternate versions of herself.) “Here I am no ‘superhero,’” Kara reflects. “I am just like everyone else.” We can identify with this young woman. Who hasn’t wrestled with the desire to fit in and with the temptation to measure oneself against others, especially when in school?

The script also treats Maxima sympathetically. She wants to be “a leader… an individual who can change things for the better,” but her family sees her only as a potential child-bearer who can help repopulate her dying species. I’d like to see more of Maxima’s struggle to define herself as a fully realized individual, over and against her family’s narrow view of her as a breeder.

I didn’t find myself especially interested in Tsavo’s plight; however, my reaction may indicate nothing more than the fact that I’ve been lucky enough to lead a sheltered life, free from the threat of war and civil strife. Readers from other backgrounds and in other parts of the world, of course, might identify with Tsavo’s crisis all too readily.

The art by Emanuela Lupacchino (pencils) and Ray McCarthy (inks) is clean and fluid throughout. They show a strong command of both establishing shots (for example, Crucible’s bright-and-shiny, high-tech classrooms) and action sequences (the two-page splash scene of the battle on Ngo is a standout). Supergirl’s and Maxima’s outfits seem more like body paint than clothing, giving a few panels more of a cheesecake feel than I think is appropriate when Kara, at least, is a teenager.

I enjoyed Supergirl #37. I may even go back to reading the title monthly; I’m curious to see how Kara fares in the rest of her Crucible career, and I’d like to watch her tentative friendship with Maxima develop.

Besides, it’s still a long time until we see CBS’ Supergirl, and it’s unlikely that show will deliver the space opera angle this comic book can. Hopefully, however, it will give us, as Perkins and Johnson do, a hero we can both look up to and identify with. Their Kara Zor-El does indeed seem like a super girl.