Marvel’s ongoing Darth Vader book is so good, it almost makes me forget Episode VII is still half a year away. Each month’s new issue from writer Kieron Gillen and artist Salvador Larroca feels like a major event, and offers a trip both familiar and fresh to the galaxy far, far away—no small feat.

• An awesome “opening crawl.” This may seem a small thing, but it isn’t. Marvel’s decision to open every issue of every monthly Star Wars book with receding text in that familiar yellow typeface was not a good one. Honestly: Not every plot recap deserves that iconic treatment. But Gillen writes a crawl-worthy recap for issue #5. “Crisis strikes the galaxy… battle droids from a forgotten factory… Now with the might of an army under his hand…” It’s all very grand and menacing and exciting. We’re off on a Dark Side adventure! If Marvel insists on sticking with the roll-up recap convention, all its Star Wars scribes should take lessons from Gillen on how it’s done.

• An exciting new take on vintage Star Wars action. An extended sequence in which Darth Vader invades his enemies’ base takes the best elements from the first reel of A New Hope—anxious soldiers, laser blasts through smoke-filled corridors, babbling and beeping droids, Vader himself—and reflects them in a fun house mirror. These soldiers aren’t rebellious freedom fighters, Triple Zero is one sadistic robot, and Vader’s entrance is both inevitable and unexpected. Gillen and Larroca’s fantastic work may make you feel guilty, having so much fun rooting for the bad guys.

• Synthetic Sith! Gillen introduces a surprisingly solid science fiction plot point into Star Wars’ space fantasy milieu: the technological simulation of Force abilities. Dr. Cylo—who himself would be at home in a hard sf novel; he’s an artificial intelligence who can download into new bodies as needed—has been busy proving Clarke’s Third Law, creating cyborgs whose embedded technology gives them faux Force powers. Vader, a true Force-sensitive, can tell the difference (more on this in a bit); but Cylo doesn’t care. Neither, it seems, does the Emperor. Cylo says Palplatine wants “replacements” now, not “apprentices.” “The Force is obsolete,” he declares. I suspect, as they say in the cowboy movies, “them’s fightin’ words.” 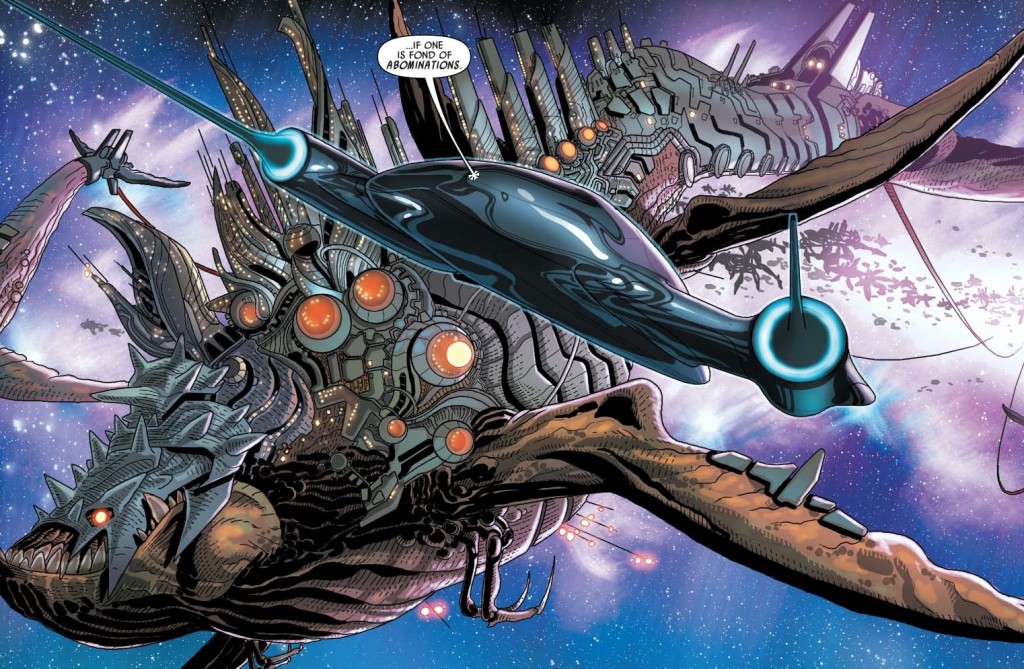 • Sympathy for the Sith Lord. Gillen and Larroca leave readers with no doubt that Darth Vader, villain though he is, clings to and mourns some shred of morality. He sees Cylo’s flock of technologically modified Neebray—formerly beautiful and graceful creatures, now burdened with high-tech high-rises running their bodies’ entire lengths—and calls them “abominations.” When confronted by tech-altered humans, Trandoshans and Mon Cal, he is saddened and angered: “There is nothing about the Force about anything here.” Vader deems Cylo’s work “blasphemous.” Vader no longer walks in the light of the Force, but he obviously remembers when he did. Cylo calls his soldiers Vader’s “children”—in other words, the logical extension of the Dark Lord’s own status as “more machine than man.” Confronted with the truth that he, too, is a living and breathing blasphemy, Vader hits an existential crisis. How does Larroca make that static black mask convey confusion and pain? These few pages brought home for me the tragedy of Darth Vader more than anything in the prequel trilogy did.

What did you think of Darth Vader #5?