She only appeared in a handful of episodes of the original Star Trek television series, but Grace Lee Whitney, who died on May 1, made an indelible impression on fans. Her character, Yeoman Janice Rand, was not evidence of series creator Gene Roddenberry’s oft-vaunted enlightened view of sexual equality; Rand was written into the show to be both a potential love interest for Captain Kirk (a concept quickly discarded, freeing Kirk for many a romantic rendezvous with female aliens across the final frontier) and eye candy for male viewers at home. Whitney, however, infused Rand with professionalism, a sense of humor, and extraordinary sensitivity.

You’ll sense some of those qualities as you listen to Whitney speak about the role, and as you see some brief clips of her work from the classic episode “Charlie X,” in these comments, recorded for the Sci-Fi Channel’s “Special Edition” of Star Trek in 1998-99:

Whitney soon left the series, but Rand would be remembered. The character makes brief appearances in Star Trek: The Motion Picture (as the Enterprise’s transporter chief) and Star Treks III, IV and VI (as an officer aboard Captain Sulu’s Excelsior, a role she reprised in the Star Trek: Voyager episode “Flashback.”)

Grace Lee Whitney was also, without doubt, a true sci-fi Christian. According to NBC News:

As closely identified with Yeoman Rand as she was, however, her family stressed Sunday that Whitney’s preference would be to be remembered as a “successful survivor of addiction.”

“Grace experienced 35 years of sobriety through continuous fellowship with others and through God and Jesus,” they said.

Grace Lee Whitney testified to Jesus’ power to change lives. In her autobiography, The Longest Trek (1998), she wrote:

You can’t lead anyone out of the desert unless you’ve been to the desert yourself. You can’t lead anyone out of the gutter unless you’ve spent some time there… I think that’s why God saved me, and why he saves a certain remnant of alcoholics and addicts and doesn’t let them die in their addictions. A lot of his precious children are out wandering in the desert, they’re dying in the gutters, and it’s breaking his heart. So he let Grace Lee Whitney go to hell and back so that she could point the way out of the desert… Apart from God, Grace Lee Whitney is a miserable wretch who hasn’t enough sense to stay out of the gutter. And that’s okay. Because, as it turns out, that’s exactly the kind of person God was looking for. God uses the foolish to confound the wise. He uses miserable wretches like me to tell his good news to all the other miserable wretches—the news that there is hope, there is love, there is a way out of hell, there is a way home. 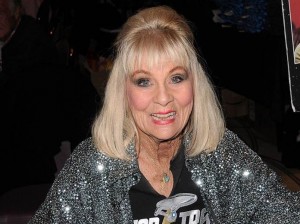 Grace Lee Whitney is home. Thanks be to God for her life, her talents, and especially her witness to God’s amazing grace in Jesus Christ.