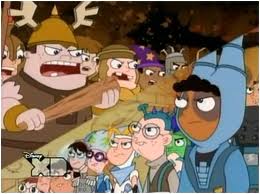 Have you been watching Disney’s Phineas & Ferb?  If not shame on you, because it’s awesome!  In this cartoon, yes cartoons are often the most thought provoking media, two brothers plan to do something new every day of summer vacation.  These are boys who will not waste time.  Well, except for the day they pledged to do nothing but sit under a tree.

So where do you start?   For us geeks it has to be “Nerds of a Feather.”  In this episode the boys strap on the costumes of their favorite genre characters, Phineas as a space captain and Ferb as an elf, and head off to the Tri-State Area Annual Sci-Fi and Fantasy Convention.  There they find something shocking, the convention is divided into two opposing fan bases, the “Speckies” support their beloved Space Adventure while the “Finkies” support the fantasy Stumbleberry Finkbat franchise.  The two sides are so divided that none of them visit special effects legend Clive Addision who worked in both franchises.

As I watched events unfold it hit me, Phineas and Ferb provide great examples of behaving like Jesus by reaching out to people who are not like them.  In fact they are great examples of Eric Bryant’s Not Like Me.  In this book, Bryant argues that Christians should reach out to the outcasts in society, those who are the most unlike us if we wish truly behave like Jesus.  Jesus did not spend his time with the religious establishment but those outside of it.

So how do the boys reach out to nerds not like themselves and attempt to preempt an inter-genre geek war?

Phineas and Ferb paint us a picture of Jesus.  Jesus saw past the stereotypes and saw the person.  He could communicate with the common man and the scholar equally effectively.  He even attended parties with Pharisees and the religious outcasts.  Phineas and Ferb, and Jesus, created authentic relationships with people that are different from them.  And because of this fact all three are able to pour themselves into the lives of others.  Thank goodness we have two hall of fame geeks to help show us way to working with nerds not like us.