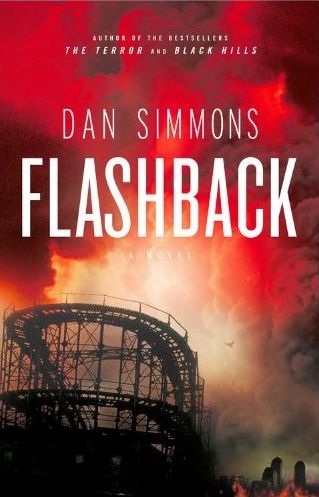 I’m an unabashed Dan Simmons fan. I first discovered him eight years ago after reading about his 2003 novel, Ilium, online. Just the description of that book was enough to blow me away. Unfortunately, it was only available in hardcover at the time. Since I try to avoid paying hardcover prices for authors I’ve never read, I opted to pick up Hyperion instead. Like so many others who’ve read Simmons’ Hugo and Nebula award winning novel, I was blown away. I tracked down everything I could find by him, including some out of print stuff, and have bought every subsequent novel as soon as it was released.

Simmons quickly became (and remains) my favorite author. While he’s certainly a great storyteller, he’s also a great thinker, which is what I truly appreciate about him. A Dan Simmons novel is chock full of ideas. His thoughts are always complex and challenging. Even when I don’t like what he’s thinking, I always love how he’s thinking it.

All of that leads us to Simmons’ latest novel, Flashback, which not only falls in line with what I’m describing but contains some of Simmons’ most compelling thoughts to date. Now, let me say upfront this isn’t a review. If you’re curious to read my review of the novel, you can check it out on Goodreads. (The short version is I highly recommend it and give it 4.5 stars). Instead I want to explore some of the ideas Simmons’ wrestles with in the novel. I’m going to stay spoiler free. All the elements from the novel I discuss are things you find out within the first few chapters. So whether you’ve read the book, intend to read it, or have no interest in it at all, my hope is that this discussion is accessible to you.

The world of Flashback is bleak. The novel takes place roughly twenty years in the future after America has undergone a major economic collapse. We’re talking something many times worse than the Great Depression. America as we know it has ceased to be. Our government is weak, much of the southwest is no longer a part of the country and our soldiers are sent to fight Japan’s wars in order to pay off the national debt. The rest of the world isn’t in great shape either. Israel has been obliterated by a nuclear attack and only a handful of refugees remain alive.

At the center of the novel is a drug called Flashback. Flashback enables its user to not only recall but relive any memory they choose in perfect detail. The cast majority of Americans are, to one degree or another, hooked on Flashback. Given the above description it’s easy to understand why. The present is utterly devoid of hope, and the future isn’t looking much better. Instead of facing either of those two bleak options, people instead elect to return to a time when there was hope and relive their past.

As I mentioned at the outset of this article, Dan Simmons is a complex thinker. The themes he extracts from Flashback’s setting are many and multilayered. But the one that grabbed me the most, especially when I approach the novel from a faith perspective, is Simmons’ examination of responsibility and the damage we cause when we refuse to live in reality.

This theme is felt most strongly in the way the novel’s protagonist, Nick Bottom, goes about his life. Nick was at one point a detective in the Denver PD. He was good at his job and had a promising future with his wife and son, Val. As the novel opens, we learn all of that is gone. His wife is dead, and he’s long since been fired. He’s not only estranged from his son, but Val hates him and refuses to even acknowledge his existence. The reason for Nick’s epic collapse? He’s addicted to Flashback.

Nick chooses to spend as much of his life as he possibly can under the drug’s influence reliving memories of his wife. Rather than living in the present and fulfilling his responsibilities to his son and career, he instead lives in a false reality where his wife never died. He feels better, but everything around him suffers for the sake of his happiness.

What’s happening to Nick is a snapshot of what’s happening in the novel’s world as a whole. We know things are a mess, but why are they that way? As Simmons’ fleshes out the world’s backstory we learn it’s because for years the country ignored the realities of mounting debt and entitlements for the sake of living in a falsely constructed economic reality. The result of that denial of responsibility and reality was the collapse of a nation. In the novel’s present, the country continues their tragic choice. Rather than dealing with the disaster that’s been created, they’ve collectively embraced the sweet but false fantasy world offered by Flashback.

It’s a tragic picture and one that we live out constantly in our own lives. A couple weeks back I preached a message on knowing God as Father from Romans 8:12-17. In verse 17 Paul says something very strange. Writing about our adoption into God’s family he says, “and if [we are] children, then heirs—heirs of God and fellow heirs with Christ, provided we suffer with him in order that we may also be glorified with him.”

That’s right. Paul says that to find our inheritance in Christ we must embrace suffering. Let’s be honest, we suck at that.

In our culture, we live with a constant sense of entitlement. We’re very concerned about what our rights are and making sure that no one infringes upon them. There’s a good side to that. I’m grateful for the political liberty being an American gives me. But there’s also a dark side to it. Our sense of entitlement often doesn’t stop at simply being a political reality and instead becomes personal. We believe the world, and by extension anyone we have a relationship with, owes us something. We walk around with a chip on our shoulder, angry when we don’t get our why. We see our personal happiness as being the highest ideal in life. No one had better stand in the way of us reaching that ideal.

As Christians, we’re not immune to that way of thinking. If we’re honest with ourselves, it shows up far too often in our lives. But if that’s how you catch yourself thinking, I have news for you. You don’t have a right to be happy and the goal of being a Christian isn’t so that you can achieve perfect happiness. The goal of Christianity is to serve God, glorify him and in doing so become who we were created to be. Doing those things will result in joy and a deep sense of fulfillment, but those are the effects of the Christian life, not the goals.

Achieving the goal of living how God wants us to requires pain. Life is going to hurt. If it doesn’t, we’re probably not living in the way God is calling us to. Instead, we’re living in a Flashback-esque state where we’ve chosen to deny the reality that life is hard and painful. Instead we stick our heads in the sand, embrace our sense of false entitlement and live a life devoted to our own pleasure. It might work. We might make ourselves happy. But we’ll also be raining down destruction on everything and everyone around us.

Ultimately, the point Dan Simmons is making in Flashback is this: things don’t have to be this way. America didn’t have to collapse. The present doesn’t have to be bleak and depressing. The future doesn’t need to be hopeless. There is a way out of the mess, but getting there requires those in the novel to live in the real world, with all the pain that comes along with that, and start working to make things better.

The same message is true for us. God is calling us to live with our eyes open, embracing life with all of its joys, triumphs, hurts and failures. The closing lines of the book put it best (don’t worry, we’re still spoiler free here!):

Anything less is just flashback.

7 comments on “Flashback, Reality and Romans”