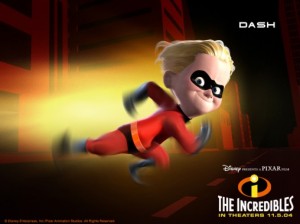 The other night I was watching Disney’s and Pixar’s The Incredibles with my kids.  It’s hard to imagine this great movie came out in 2004, years before Disney purchased Marvel and really got into the super hero business fulltime.  And let’s be honest thought it’s just a cartoon, it’s a much better superhero movie than recent offerings like The Best Weekend in New Mexico Ever, I mean Thor.

Like all Pixar movies story moves forward important life lessons.  In this case one can easily see the importance of family and the need to rely on each other.  And with the addition of Mace Frozone Windu, we even see the importance of our extended connections.  But in the end hidden within this movie is a message that makes me cringe every time I watch it, even if it’s a subtle message.

Spoiler Alert, Spoiler Alert, never mind this movie has been out for seven years.  If you have not watched it yet any spoiler information you are about to receive is entirely your own fault.  In Watchmen style, the Incredibles, the Parr Family, live in a world where it is illegal to operate as a superhero.  Under the guidance of the government the Parr family has to find their super abilities and fit into society at large.  For the dad Bob Parr he chaffs against living without using his abilities.  He longs for the days when he was Mr. Incredible the most celebrated superhero around.  But for his son Dash it’s a completely different problem.  While dad may have had a chance to live to his full potential, Dash has never had a chance to be himself and run, run as fast as he can.  He constantly begs his mom and dad for the new toy, the ability to play sports like every other kid.   Mom fears that the impulsive Dash would not be able to hold back on his speed and expose himself as a super.  Sitting in the car, Dash and his mom Helen have this conversation:

Dash: You always say ‘Do your best’, but you don’t really mean it. Why can’t I do the best that I can do?
Helen: Right now, honey, the world just wants us to fit in, and to fit in, we gotta be like everyone else.
Dash: But Dad always said our powers were nothing to be ashamed of, our powers made us special.
Helen: Everyone’s special, Dash.
Dash: [muttering] Which is another way of saying no one is.

Nobody is special, no one is incredible.

Latter in a burst of monologueing, the villain Syndrome remarks to Mr. Incredible:

Syndrome: Oh, I’m real. Real enough to defeat you! And I did it without your precious gifts, your oh-so-special powers. I’ll give them heroics. I’ll give them the most spectacular heroics the world has ever seen! And when I’m old and I’ve had my fun, I’ll sell my inventions so that *everyone* can have powers. *Everyone* can be super! And when everyone’s super…
[chuckles evilly]
Syndrome: – no one will be.

Nobody is super, no one is incredible.

I partially understand this.  Society has a whole has unspecialized our rituals and competitions.  When I was a kid I can remember contests with Blue, Red and White ribbons.  Now I hear about participation ribbons.  I have heard of parties for graduating the 2nd grade, with presents that would make adult me happy.  I once saw a parent give their child a trophy for a ballet recital, yes she went to a trophy shop and had a trophy specially made.  And she said she does it all the time.  So I appreciate the fact that as a society we have unspecialized our special events.   And like others I mourn this.  A trophy is no longer special if you have 30 of them.  But alas that is another discussion for another day.

But I have to complain about the idea that if everyone is special than nobody is.  This is so against my worldview as a Christ follower.

Let me throw two examples at you from the Bible.

13 For you created my inmost being;
you knit me together in my mother’s womb.
14 I praise you because I am fearfully and wonderfully made;
your works are wonderful,
I know that full well.
15 My frame was not hidden from you
when I was made in the secret place,
when I was woven together in the depths of the earth.
16 Your eyes saw my unformed body;
all the days ordained for me were written in your book
before one of them came to be. (Psalm 139: 13-16, NLT)

Here David makes one thing clear.  Everybody, all, the entire population, were all (did I mention all) made and crafted by God.  Everyone is an original God creation when you look at the label.  And God does not make junk.  C.S. Lewis writes in The Weight of Glory, “There are no ordinary people. You have never met a mere mortal.” Now, I think we can argue that plenty of people don’t activate their specialness.  Some surrender their value and live unspecial lives.  But the fact that a person was designed and created by the God of the Universe, the same person who built the universe makes you special.

If that there was not enough, Christians have to give up the myth that they are not special.  Paul writes in Romans:

14 For those who are led by the Spirit of God are the children of God. 15 The Spirit you received does not make you slaves, so that you live in fear again; rather, the Spirit you received brought about your adoption to sonship.  And by him we cry, “Abba Father.” 16 The Spirit himself testifies with our spirit that we are God’s children. 17 Now if we are children, then we are heirs—heirs of God and co-heirs with Christ, if indeed we share in his sufferings in order that we may also share in his glory. (Romans 8:14-17, NLT)

Is your mind blown?  Go ahead and quit your false modesty and behold your specialness!  Christians are not only special because of who made them, but also because of what they share with their savior.  Again, we can cry Abba because of Him.  Now I’m a dad and there are only two people in the world that are special enough to me to cry daddy and have me react.  But you can cry Abba to the Father.  And you are co-heir to Christ.  Yes, you share in the inheritance with that carpenter.  Yeah I know carpenters are not special.  Oh wait, savior for all mankind and that stuff, sounds kinda special to me.   Give it up, you’re not “normal” Christian so get out of the mud and act like the “Super” you are.

In the end, the universe of The Incredibles fights against the notion that no one is special.  You do not protect useless things, you throw them away.  The Parrs became heroes for a reason and if it is only because it was fun and gave themselves glory, well then they are not really heroes anymore.  In the end the Parr family chooses to defend the city.  You only fight for things that are special, in this case “normal” unspecial people just looking to live their “normal” life.  Because you’re wrong Dash, mom’s right, everyone’s special. Let’s not forgot it.