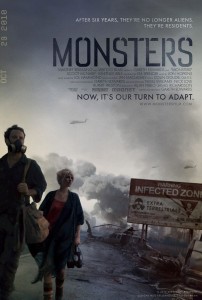 I was introduced to Monsters, the film I’ll be discussing today just before it came out on Blu-ray. The film had all ready run the film festival circuit and had seen a limited release in theaters. I had heard about it in passing on a number of podcasts but nothing more than that. A few months before being released on disc format it was available on video on demand. That’s when I watched it on Amazon’s video on demand service. After watching the film I went to see when it would be out on Blu-ray. Turned out it was that next week. What timing I had indeed.

Monsters is about a photojournalist named Andrew (Scoot McNairy) who agrees to help Sam (Whitney Able), the daughter of a wealthy media mogul get back to the U.S. from Mexico by going through the Infected Zone, an area covering northern Mexico which has been fenced off due to dangerous aliens who came to earth via a crashed NASA probe on its return trip. Before I get into my impressions on the film though, I have a few things to say on the production of the film, an interesting story that I regale to you here.

Gareth Edwards, the director has a background in computer animation. He broke into television when he started to offer studios to do visual effects for free if he was given the chance to direct. Monsters was picked up as Edwards’ first feature film by Vertigo as a 12-page treatment. In the months prior to shooting they got a budget of an estimated $500.000, a shoestring crew of four and the two leads in the film, Scoot McNairy and Whitney Able. Edwards then worked with McNairy and Able to develop a loose back-story for each of the characters. From there they packed up for Mexico and Central America to shoot the film.

A part of what makes the production so interesting is how unplanned it was. As the crew travelled across the country they would scout locations just minutes prior to filming the scenes there. They worked with what looked interesting or what was given them. Everyone in the film with the exception of the two leads were all real people that were asked to be in the film on the spur of the moment. Police escorts, guides, drivers, café owners and even patients at local hospitals found themselves with small roles or as extras. Working off the outline, Edwards, McNairy and Able would figure something out before the camera rolled and then they shot it with much of the film being adlibbed. Main plot points were changed throughout principal photography due to what they were able to shoot.

After filming, the movie was edited back in London where Edwards is based. Sifting through one hundred hours of adlibbed footage they constructed scenes into a four-hour cut. From there they whittled it down to the ninety-minute cut we have now. Since the majority of people seen in the film are not actors McNairy and Able were asked to feed them lines that would result in a response that would fit the alien plot of the movie. This aspect of the editing is well done, as it seems like they were told what to say.

Among his duties as director and cinematographer Gareth Edwards was also the sole visual effects artist on the film. Using off the shelf software he molded and animated all of the 250 effects shots himself. The effects do add a level of quality to the film to make it feel more legit. It does not look like half a million went into it, but rather more like a few million. I could compare the quality of the effects to that of Battlestar Galactica or Firefly done by visual effects studio Zoic. 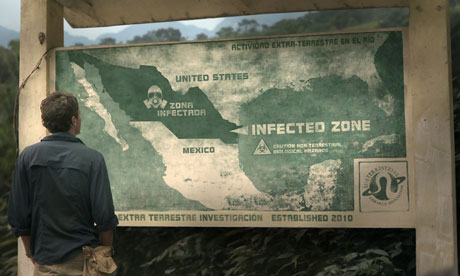 My initial reaction to the film is that it was beautifully shot. It creates a quiet and atmospheric mood with the lighting, framing of shots and the ambient music supplied by Jon Hopkins. There is also an uneasy impression that there is something going on just over the hill. This is by no means a loud action packed summer blockbuster film in the vein of Spielberg or Bay. Unlike a summer film where we see alien invasions and explosions galore, Monsters picks up six years after what they call ‘the creatures’ have had time to settle into the Infected Zone and start breeding. Enough time has passed that everyone in the film looks at the news reports and destruction in their towns as an everyday occurrence and goes about their business like nothing has happened. The closest it comes to being a summer blockbuster is in moments when Edwards teases the audience with glimpses of the aliens throughout the movie until he is ready to show them off like the shark in Jaws.

One thing I have to appreciate about Gareth Edwards is that he set the film in Mexico. Being a Brit he could have gone the way of what Danny Boyles did with 28 Days Later and set the film in a quarantined England. This was a refreshing change of pace. I am tired of seeing L.A. and New York being destroyed by aliens. That’s what I like about District 9 being set in Johannesburg, South Africa. But that’s a discussion for another day.

One thing that Edwards is good at is world building. Throughout the film one can spot news reports on the television in the background or signs on the sides of buildings and on the road that show the way to the Infected Zone or where to get free gas masks. Edwards, who was the Director of Photography also has a habit of panning the camera off of the actors to show tanks rolling down the street in the background or areas of destruction.

Before I start sounding too much like an am fawning over Monsters too much I do have to say that it does have its faults. In real life at the time Monsters was shot McNairy and Able were a real couple and are now married. Since the film was dealing with two characters it was inevitable that there was going to have to be some sort of romantic tension between them. And there is. Throughout the film Andrew and Sam do have chemistry and the love story almost comes off as a platonic love. However it turns into something forced and very awkward even though they are a real couple.

Well in other news, if you have already watched the film and have found Monsters interesting you should know that a sequel is being planned. The idea is that it will follow another set of characters through the Infected Zone. My only qualm about the news is that Gareth Edwards will not be attached. So make of that what you will.

Monsters is a great original take on the alien invasion genre. This would make for a good double feature with District 9 both with their common vibes. Monsters is a solid B movie. It is enough of a B movie that the average Joe would understand it but also has something for those looking for something more thoughtful and moody. All that said however, I feel that the story of the production of the film is the most interesting part of the film. I give Monsters 4 out of 5 stars.