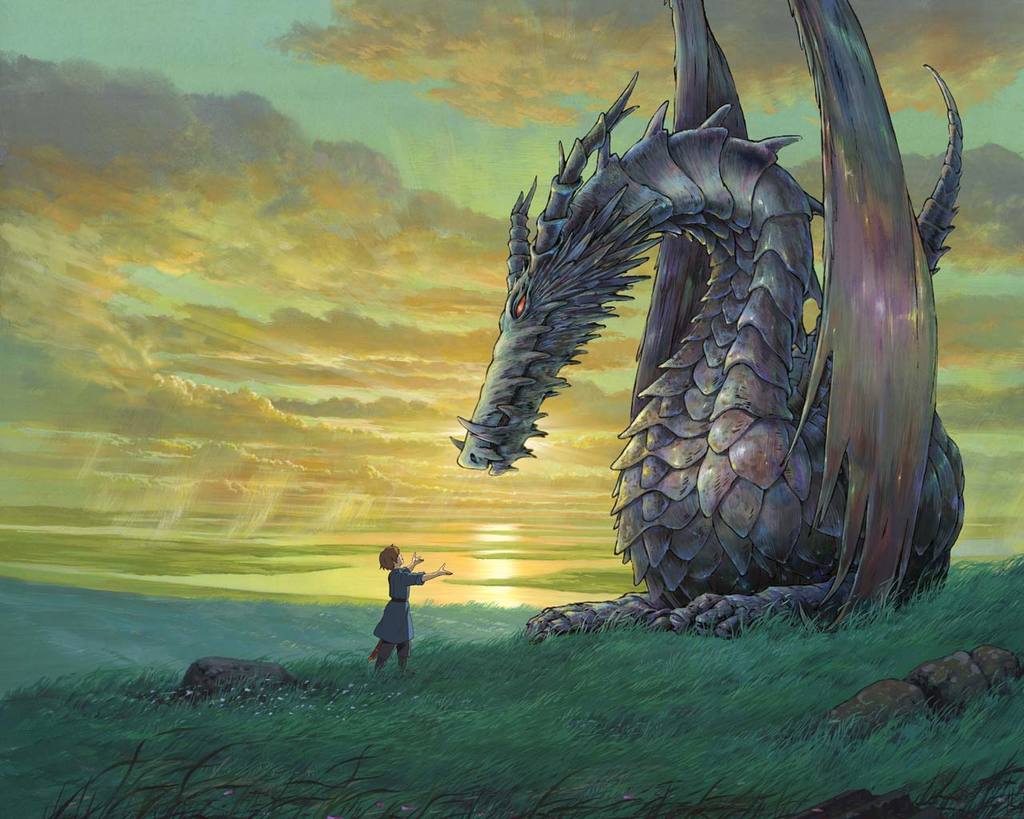 Recently I’ve been really diggin’ the Earthsea cycle. Almost every one of my geeky book friends say that the Earthsea books are timeless fantasy classics that every person with geeky leanings just simply has to read. So far, I totally agree.

Since I really love reading and I’m a bit of a tightwad when it comes to spending money on myself, finding the whole set at a flea market for only nine bucks was all the encouragement I needed to finally buy this. So far I’m halfway through the third book (maybe I’ll post some reviews of the books on the website soon), and I can’t help but see all the allegory and direction-pointing to Christ and many other Biblical themes. Now, I’m going to take a wild guess and say that you are probably like me in some ways. You’re a Christian who loves Jesus, you probably have a long courtship with speculative fiction, and you’re most definitely ruggedly handsome. And if you are a girl, you are most definitely ruggedly handsome. And I can’t speak for you in this case, but if you are like me, then you probably hear the Holy Spirit speak to you in strange ways when you watch TV or movies or you read a good book. You may have heard God say something to you when Charles Xavier was helping Erik (Magneto) move the giant satellite dish. You may have heard God stir you in the last twenty minutes of The Matrix. Or you may have seen some important truth in the dialogue of The Incredibles. Now, you might not have realized that it was God, here. You might have just thought it was your own natural, geeky inclinations, forcing the medium into a certain mental grid. But let me run something by you real quick: could it be that the Holy Spirit is saying something in your language?

When Jesus taught to the multitudes, the Bible says that he purposely taught in parables. And if you look at the parables, the imagery is very much relating to farmers and peasants, his target audience much of the time. So to those people, he spoke their language: you reap what  you sow, the mustard seed, the two sons working in the vineyard, etc. This is their language. Whenever I go to movies or read or watch TV, I love the medium for what it is, but I’m also keeping my heart tuned to hearing God’s voice in that medium. Now, God has actually spoken to me in ways that you would speak to a farmer, but that was only after I actually planted a fruit tree and learned the “spiritual dialect,” if you will. Besides just the plain speaking that the Holy Spirit often does through the presentation of the Word, he also speaks our certain geeky “dialects.” Yours might be different than mine, but I think in many ways, we’re alike, here.

Okay, on to Earthsea!

I’m not really going to give too much away, but for all you Matt Andersons out there, you’ve been warned.

I know for a fact that the author of Earthsea, Ursula K. Le Guin, did not intend to write with Christian imagery. She actually intended more Taoist philosophy, I believe. Yet even in the midst of her beliefs, she couldn’t escape certain Biblical–or you could say Christian mythological–allegory.

First is the world. There is a tale within the books that the earth was formed by a powerful wizard who spoke to the water and commanded the earth to rise, forming the Earthsea archipelago. Then there’s the actual magic in the world–which I love. It’s just spoken words. But more than that, it’s a hidden, knowable language of words and names, in which you must know the thing before you can command the thing. Even the wizards have everyday, common nicknames and then they have their real names. And they don’t give out their real names to just anyone, for fear of someone saying their real name in a spell against them. Then there are other more specific story instances. For instance, in the first book A Wizard of Earthsea, something evil is chasing one of the main characters, sapping him of strength. And it’s only until he turns around and chases it that the evil actually flees him. Then there’s the instance in the second book, Tombs of Atuan, when the protagonist saves someone who is completely oblivious to their own imprisonment–they are literally trapped in a tomb, worshiping dead gods. Later on as they flee, the tomb starts to crumble and the former prisoner is not scared of the crumbling tomb but of a person they may see once they get out of the tomb. The wizard looks at her and basically says, “I’m currently holding these tombs together and holding back an earthquake that’s about to come. Why are you so afraid of what man can do when I’m right here?” As they leave, the grave which served as a prison was literally swallowed up by the earth. In the third book, The Farthest Shore, there’s a scene where a wizard saves someone from a slaver ship. He arrives as radiant light, breaks off all the shackles that held all the prisoners, but comes for only one man.  This man failed in an assignment that he had and thus became a slave, yet he was saved anyway. After that scene, the man reflects that all the love and awe and admiration that he may have had for this wizard before was only solidified and confirmed in his rescue, and he couldn’t help but have even deeper feelings for the wizard.

Why do these things resonate so much? If you are like me, then you saw Genesis, redemption,  grace, salvation, the power of words, insight and revelation, the fear of man, the power of God, resisting the devil, Peter’s denial of Jesus, and your own story and testimony. How is it that someone who intended to write something with eastern philosophy in the end wrote things that you can find in the Bible? Maybe this is another tale for another story, but I believe that this is one of the ways in which God speaks to us: through a message he has already universally written upon our hearts. And then when we deliberately open our hearts and our spiritual ears to what the Holy Spirit is saying, many times you won’t just see a wizard. You’ll see Jesus.

6 comments on “The Messiah of Earthsea”