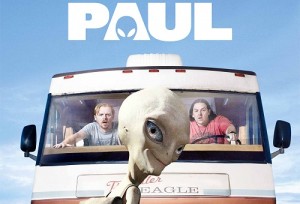 It is no secret what the writers and producers of the sci-fi comedy, “Paul,” think about Christians.  But the pressing question is this: How do we respond as Christians?
The main female character of “Paul”, Ruth Buggs (Kristen Wiig) is a crazy-eyed, conservative, Christian living in a trailer park.  According to the film, she needs “enlightenment.”  That enlightenment consisted of a clean cut from her constricting faith and embracing of science and her sexuality.   Midway in the film, she sees “the light” and frees herself from her religion.
The first reaction of so many Christians towards this movie was to raise their fists in the air in protest.  Was this warranted?  Is this how a Christian ought to respond?
I propose that there is a better way.
Many Christians become upset or frustrated when people that aren’t Christians don’t act like Christians.  I feel they fail to realize that being a Christian is not a list of morals and rules that someone can apply to their lives, but rather, it is a complete change in identity that subsequently leads to different actions (2 Corinthians 5:17).  People outside of Christ cannot and will not act like Christians.  Nor should they be expected to.  Don’t be offended, instead response in a loving way.  Otherwise, the negative depiction of Christians in this film may not be far from the truth.
The writers of the movie did stumble onto a great nugget of truth nevertheless.  In fact, that piece of gold in the script occurred in the same scene that Ruth left her faith.  During the introduction of Ruth’s character, we find out that she suffers from an eye disease in her left eye that has left her blind.  To her luck, her path crosses with the alien named Paul.  Paul serves almost as a missionary for atheism to Ruth.  He tells her the “good news” of freedom from religion and sexual restraint and offers to heal her eye.  She agrees and Paul heals the blind eye.  There is something significant about how Paul heals her.  When the healing is taking place, the deformity of Ruth is taken away and briefly appears in Paul’s own left eye.  He takes the blindness onto himself and dissolves it.
Though it may not have been the goal of the writers, we are invited to think upon Christ.  Jesus Christ took our sins upon Himself and absorbed the wrath of God that we deserved because of our sins.
How do we respond as Christians?  We turn to Christ.  More than responding with the expected hatred and frustration to those that poke fun at Christianity, we ought to think of Christ.
Always look to Christ.

10 comments on “The Alien, Paul, and the Crazied-Eyed Christians”