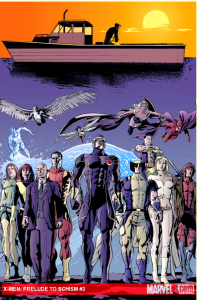 Is there finally an X-Men comic worth reading?

X-Men comics over the past few years have been, well, anything but stellar; however, the upcoming X-Event has had me intrigued since I first began hearing whispers of it on various websites. Not much has been said about the forthcoming X-Men: Schism miniseries, to be written by Jason Aaron (Wolverine, Ghost Rider) and illustrated by a collaborative team of artists including Frank Cho (Mighty Avengers, Hulk), and Carlos Pacheco (Avengers Forever, X-Men). What is known is that the story will find Cyclops and Wolverine on opposite sides of an ongoing mutant debate: should mutants try to peacefully co-exist with humans or should they live on their own entirely? Rumors and teaser images have given the impression that not only will the two heavy-hitters be against one another philosophically, but physically as well with their followers choosing sides. Could this mean the end of the X-Men or could it be the beginning of two separate entities? Honestly, up until recently, Cyclops and Wolverine have never really gotten along. They are constantly fighting over something (Jean Grey ring any bells?). Personally, I can’t wait for this little rift between the X-Men. I would love to see a brawl between these two the likes of which we have never seen. And for those of you who don’t think Cyclops stands a chance against Wolverine, I wouldn’t be so quick to judge. He has gotten pretty tough as of late.

X-Men: Prelude to Schism, written by Paul Jenkins (Civil War: Front Line, Son of Hulk), with art by Roberto De La Torre, Andrea Mutti, and Will Conrad, is a character-driven four part mini-series that explores the depths of four of the X-Men’s major powers. Already an endangered species, the mutants await certain peril as an unseen enemy moves closer to Utopia, the X-Men’s headquarters. The reader is never given even the slightest hint as to who or what the threat may be, (I’m guessing the threat may come from within) but rather waits in anticipation as Cyclops contemplates his options and seeks advice from his elders and predecessors.

In issue number one, Cyclops speaks with Charles Xavier while the rest of the X-Men anxiously await his decision in another room. Jenkins uses flashbacks in a brilliant way, allowing both men to relive moments of unbearable decisions and sacrifice that truly made Scott Summers (Cyclops) the leader he is today. He has become the only mutant able to unite their entire race. What makes me respect Paul Jenkins in this issue is that it is almost entirely written as a telepathic conversation, Xavier’s signature power. The hearts and souls of these two men are powerfully depicted and they hardly even look at one another! A standing ovation for this particular facet of the story should be given to De La Torre who does an excellent job with the illustrations. The dark, gritty look provides an uneasy feeling of impending doom while at the same time, allows the reader to grasp the depths of Cyclops’ decision.

Issue two provides a different outlook for the story as Cyclops now speaks with Magneto. You may be thinking, Magneto? Yes, that’s right. For those of you who haven’t been privy, Magneto is now a member of the X-Men, united by Cyclops. For the most part, this issue really delves into Magneto’s past growing up in Nazi Germany. Jenkins focuses on Magneto’s relationship with his father and how he looked up to him as a leader. It is clear that Jenkins is using Magneto’s father and the current situation that Cyclops is dealing with as a parallel. Magneto views Scott Summers as a great hero, not unlike his own father, and hopes that his own mistakes can prevent Cyclops from making the wrong decision. Mutti provides the art for this story and I was personally not as attracted to it as De La Torre’s in the first issue. I felt that it lacked depth and maturity; however, I am not discounting the issue as a whole, as it is written equally as well as the first.

X-Men: Prelude to Schism number three is a very Cyclops-centric issue. Cyclops struggles with the idea of leading the mutant race into destruction. Jenkins allows Scott Summers to question who he is as a person and as a leader before he can justly stand up and lead. In a wonderfully scripted line, Cyclops poignantly asks, “Makes me wonder who is the fool: the blind man who leads? Or the fools who follow him?” In the end, it seems that with all of the advice given, only Cyclops himself can make the tough decision, and the right one at that. I did appreciate the art in this issue. Conrad has a certain sophistication to his drawings that makes the characters involved seem highly important. With decisive attention drawn to the foremost characters, his use of perspective truly makes his drawings come to life.

Issue four will be released June 29th. Stay tuned for my review on the final issue of X-Men: Prelude to Schism as well as my thoughts on the series as a whole and my expectations and hopes for X-Men: Schism!

One comment on “X-Men: Prelude to Schism Review Part 1”