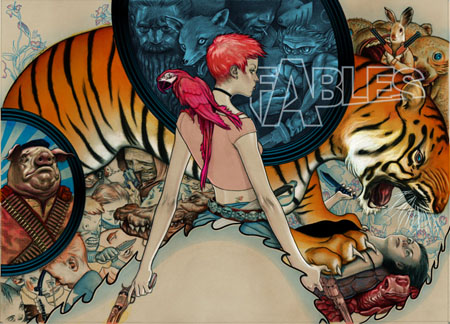 It is reported that David Yates who has directed such things as Harry Potter and the Order of the Phoenix and the television series State of Play which was turned into the Americanized feature film starring Russell Crowe and Rachel McAdams is looking for his next project to direct. Some things on his plate at the moment include an Al Capone biopic called Cicero with Tom Hardy playing Capone  and a new adaptation of Stephen King’s novel The Stand. However the most interesting of news here is that he is also considering adapting Fables to screen. Yates was rumored to be attached to Fables years ago but nothing ever panned out. It appears things have been happening behind closed doors. As some of our readers may know Fables is a story set in Fabletown which is in Manhattan’s Upper West Side. The first trade paperback follows the sheriff of Fabletown, Bigby Wolf, as he investigates the murder of Snow White’s sister Rose Red.

My hunch is that Yates will adapt the first trade paperback since this is just a movie. It will also be interesting to see if this takes off considering all of the other fairy tale themed projects coming to theaters and TV soon.

2 comments on “Director David Yates To Take On The Stand and Fables?”