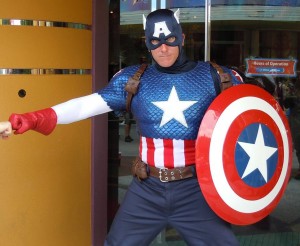 In 2009, The Walt Disney Company paid $4.24 billion, with a B, to acquire Marvel Comics.  Disney immediately looked to put their new toy into action with reruns of Marvel cartoons on their television networks and runs of new shows such The Avengers: Earth’s Mightiest Heroes on Disney XD.  Disney also made instant efforts to promote Marvel Studios movies like Iron Man 2 and sought their own control of movie distribution paying $115 million, with a M, to acquire distribution rights from Paramount Pictures for Iron Man 3 and The Avengers.  Their role in these movies is clear as one enters the Marvel corner filled with Spiderman, Thor, Iron Man and Shield Merchandise in one’s local Disney Store.  But what about Marvel’s impact in another cornerstone Disney business, theme parks?  To date the Marvel influence in Disney theme parks has been limited to merchandise sales.  This can lead one to ask, where are our heroes?

If one travels to Orlando, you can find Marvel heroes branded to theme park attractions.  Walt Disney World’s Florida rival the Universal Orlando Resort had a pre-existing contract with Marvel to use their characters.  The agreement gave the Universal park exclusive rights to characters including Spider-Man, Hulk, the X-Men, and Wolverine in theme parks east of the Mississippi.  At the time of purchase, Disney president Bob Iger stated Disney would honor Marvel’s pre-existing deals.  And with Disney deep into major expansions at Walt Disney World’s Fantasyland and Disney California Adventure there has been little chatter about Marvel in the parks over the last two years.

Last summer Iger told the Los Angeles Times that, “We’re just now considering all of our different options, so it would be premature to say when or where in the parks you would see Marvel characters — but I think it’s safe to say that you’re going to see some of those great Marvel characters walking around in the future.”

In the May issue of D23 magazine, the official Disney fan club magazine Kevin Fiege the President of Production of Marvel Studios stated on the prospects of bringing Marvel characters to the park, “It’s the biggest dream of all. We get to tap into this spectacular team that is better than anyone else on the planet at bringing fantasy to life, not only on the big screen but in the real world.”

“The notion of walking into a theme park and going into Asgard or the X-Mansion—Disney does this better than anyone. That is why I’ve gone to Disney parks multiple times every year for my whole life. It’s that next step in fully immersive storytelling, whether it’s a dark ride, a stunt show, or a thrill ride. The options are endless when it comes to how Imagineers can turn our characters, our adventures, and our films into amazing experiences.”

These comments have speculation again running wild about Marvel additions to the Disney parks.  This is especially true with the forthcoming D23 Expo in August.  When last held in 2009, Disney announced major park additions including Star Tours II: The Adventure Continues and their Fantasyland expansion.  This year, Marvel Comics will receive its own featured arena panel lead by Marvel’s Chief Creative Officer Joe Quesada.  This leads us to ask what major announcements will be forthcoming, especially since Marvel will not be hosting a panel at this summer’s Comic-Con.

With speculation high, here are my opinions on how Marvel could emerge in the parks.

Disney bought not just the X-Men and Spiderman but the entire catalog of 5,000 plus Marvel characters.  They could freely use non-committed characters in any of their parks internationally.  However, is anyone really going to get excited about the Ghost Rider ride other than Nicolas Cage?  The characters not-contractually committed elsewhere are less popular and probably would not provide a financial windfall to Disney until they more fully develop their Marvel catalog in movies and television beyond their most popular heroes.

Raise your hand if you would drop your pennies to enter a Marvel Super Hero Park.  Hand Raised!  Disney has the land and no contractual obligations that would keep them from moving forward in California with a super hero park.  The best part is this option would like give us an experience that most closely mirrors the Fiege quote.  With theme parks taking a jump forward with the immersive experience of the Wizarding World of Harry Potter, this would be a place where Disney could reclaim superior theming by building us the X-Mansion complete with Danger Room.   In this park we could walk the streets of the Marvel universe and forget we are part of this world.  As much as this is my preferred option, I question if the money is available for this ambitious project with recent additions and expansion in the existing parks.

Contractually there is nothing that stops Disney from using the entire Marvel catalog in their California parks. So they have a blank slate for additions on the West Coast and two parks they can start including Marvel characters in now.

A recent rumor is that Disneyland’s Tomorrowland would be rethemed as the Stark Expo from Iron Man 2.

In many ways this rumor makes sense.  And I love the Stark Expo concept; it is a fantastic tribute to the legacy of Walt Disney.  The theme of Tomorrowland has always been a problem with any theming going quickly out of date.  The original ride taking guests to the moon had to change its destination to Mars after the moon landing.   By recreating the Stark Expo, Disney could further promote one of their Marvel properties while perhaps finding a theme that would stick for awhile.  But this to me is still a short term fix.  The Stark Expo looks forward to the future, which does match Walt Disney’s dedication of a land that looks forward to future ideas, science and adventure.  But like the current Tomorrowland the Stark Expo would have the risk of growing out of date fast.  In my mind, the American Tomorrowlands would be better off being rethemed along the lines of the Disneyland Paris Tomorrowland, one that relies of the visions of those like Jules Verne where classic science fiction frames the surroundings not predictions of future developments.  If the Disney Hollywood Studios park is the ‘Hollywood that Never Was” perhaps Tommorowland needs to be the “Future that Will Never Be”.

My guess is that Disney will move forward with expanding the visibility of the Marvel catalog and use those up and coming characters in the parks along with additions of the contractually limited characters in California and outside the United States.  But my clear preference is a Marvel Heroland or Hero Park that would have theming to rival Harry Potter.  How would you like to see your heroes in the parks?