The fantastic Brandon Gibbs and I had an idea of going back, watching, and reviewing old episodes of shows from the 90’s and beyond.  He had the great idea of naming it “REtro View.”  I thought the name was clever so we stuck with it.

So, what would be the best pick for the very first REtro View?  The very first episode of Power Rangers, of course.

It had been about 15 years since I really watched an episode of this show.  Needless to say, I had nostalgic overload.  What I had remembered from Power Rangers from when I was a kid was that a classmate got made fun of for watching it way past the age that it was acceptable.  I stood up for him because I could relate with the nerdiness.

The other thing I remembered was Rita throwing down her magic-wand-staff thingee and making her monsters “GROW!!!”

Later, she got married to Lord Zedd and had more fun making monsters grow.

There are a few things that I completely forgot about or didn’t know until after watching this crazy episode.  I want to share them with you.

1.  The Power Rangers were known for wearing their colors, but did you know that they were already wearing their colors as their street clothes before they become the super-hero fighting team we all know and love.  Amazing, I know.  It was like it was meant to me.  In fact, when they first get in their dinosaurs, they already knew how to drive them like it was a second nature.

2.  Rita and her other baddies were released by two astronauts (with very noticeable strings attached to their suits).  The two astronauts were taking a stroll on some planet and saw what they called a “space dumpster.”  They open it up and out comes Rita Repulsa & Co.  They were trapped in there for 10,000 years.

Can you imagine being stuck in a space dumpster with this voice for 10,000 years?

3.  The black ranger is NOT Wayne Brady.  Whoever told me that was a liar!

4.  Zordon is stuck in between dimensions.  Poor guy.

5.  I remembered the bullies, Bulk and Skull, but I had no memories of Ernie. 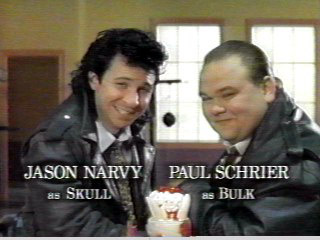 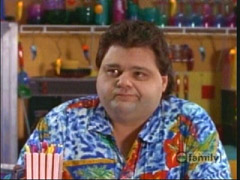 My nostalgic return to Power Rangers was fun and exciting.  Thank you, Netflix, for providing this show on streaming.

If you get a chance, rewatch this episode and share your thoughts!