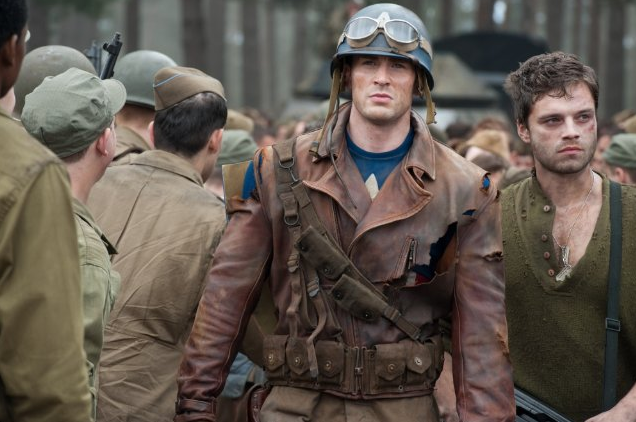 I just saw Captain America and wanted to give you all my general impression of the film. So without further adieu let us just cut to the chase.

Captain America: The First Avenger may be the best movie in what I will call the Marvel Continuity Saga. Captain America is Steve Rodgers (Chris Evans). As a small guy in a big town he wants to do his part by joining the army to fight the Nazis. After being rejected he volunteers for a top-secret research project that turns him into Captain America.

This movie has a lot going for it. First, it is a World War II period piece. For Marvel this is a good change of pace. Since it takes place in the 40’s the continuity that Marvel has been setting up over the past four years takes a back seat, which is refreshing to say the least. This is more like a prequel when fans think of what is to come. Another thing the movie has going for it is that unlike Thor where the whole movie takes place in Nowheresville, U.S.A., this film starts in America and they cross the pond and make Europe its stage. The landscape of the continent makes the scope of the film bigger than Thor or even Iron Man, which also took place on an international stage. I was also happy that they did not take a good fifteen minutes out of the film to devote to the buildup for The Avengers coming out next summer. They save all that for the last three minutes where Nick Fury (Samuel L. Jackson) shows up and tells Rogers what’s what.

As for the directing I am starting to get the feeling that Joe Johnston is a hit or miss director. This time was a hit. Another hit of his, at least in my book was The Rocketeer from 1991. Sadly though some of his misses include Jurassic Park 3 and The Wolfman. Joe can be a good director but he lacks that je ne ce quoi when it comes to certain films. If he can do as good a job as he did here I would totally be up for him directing a Boba Fett film as he has been reported to be talking about with his friend and mentor George Lucas.

I love Hugo Weaving in this. He plays Johann Schmidt or also known as the Red Skull Weaving has always done a good job at playing the villain. In this film he makes you believe that Red Skull is an actual threat to the character’s lives unlike Loki from Thor, which comes off as a whiny little brat who has not gotten his way. Tommy Lee Jones plays Tommy Lee Jones who plays Colonel Chester Philips. What I mean by that is that in his old age Jones has started to play himself just as Michel Cera does. I’m not complaining though. Jones is a good actor and I enjoyed his character. Peggy Carter (Hayley Atwell) is a no nonsense army gal. She is set up as the love interest in the film but she also brings the heart and intelligence that so many comic book movie women lack these days. Howard Stark (Dominic Cooper) is in the film, but it is more than just a wink at the audience as Jon Slattery had portrayed him in Iron Man 2. He is an actual part of the film with stuff to do. He is by no means wasted. If any top-secret project is going to be taken seriously by the government you got to have a German scientist, even during World War II. Captain America has its scientist in the form of Stanley Tucci who plays Dr. Abraham Erskine. Through him we get a character that helps the plot move along although he brings some of the films humor to light.

I have a few nitpicks. It was maybe a good fifteen to twenty minutes into the film when I was able to get a good look at the short starved looking Chris Evans that I was able to judge how good the effects to make him small were. It turns out his head is just too big for his body. The rest of the effects in the film were awesome. Another quirky little thing I noticed was the sequence when Rogers learns how much strength he actually has. To show how fast he can run it almost appeared as though they just sped up the film. What is this, an episode of Benny Hill?

Contrary to nitpicking I loved the Captain’s uniform and shield. As a call back to the comics he does wear the original costume to a certain extent during a part of the film but Howard Stark suits him up just fine with all the trappings of a WWII soldier with a patriotic flare when Rogers gains the respect of the military. I compare the iconic shield to Indiana Jones’ hat. He never leaves home with out it and will always go back for it even during a fight.

Captain America is one of the best films this summer along with X-Men First Class and Harry Potter. If Joe Johnson can make a film this great it makes me wonder how great of a film Joss Whedon will make with The Avengers. I give Captain America: The First Avenger 5 out of 5 stars.