I confess I know more about the “fi” than the “sci” when it comes to my favorite genre, but a couple of news items from astronomers caught my attention this week.

First, just as the old song puts it, “Satellites Orbiting Pulsars Are a Girl’s Best Friend.” Well, maybe not; but astronomers did detect an extremely dense planet composed mostly of crystalline. SF readers, of course, will not be completely surprised; Arthur C. Clarke called it. Kind of. In his (unjustly underrated) sequel to 2001, 2010: Odyssey Two (1982), readers learn that Jupiter harbors a massive diamond at its core. The next (justly underrated) book in the  series, 2061: Odyssey Three (1987), further developed this idea. 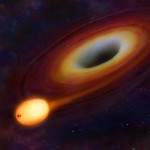 Second, don’t look now, but NASA has caught a black hole with its hand in the cosmic cookie jar. Scientists traced tell-tale flare-ups of cosmic radiation (the real stuff, not the Marvel Comics variety) back to ﻿﻿﻿﻿﻿a black hole a million times the mass of Earth’s sun. (Even though the story is only now making headlines, National Geographic, back in June, likened the radiation evidence to a “cosmic belch.” Nice.)

I like to keep news items such as these in a mental file folder labeled “The Psalm 19 Files.” From diamond planets to the death of stars, the heavens do indeed tell the glory of God!

(On a more terrestrial note, NASA also released images of Hurricane Irene as seen from orbit. Prayers and best wishes to all in harm’s way; may he who stilled the storms sustain you, and may the rest of us reach out to you with support and love when this storm has passed.)