Please do not hate me, but I’m not a big fan of the Tron universe.   It has helped pass a few hours, but Tron is something I have no need to re-experience.  If I have spare time, I’m going to reach for something like Star Wars or James Bond instead.  If friends have thought that Tron Legacy would make a good date movie, I have often given the advice to make sure their date has not seen the first one first.  I have found that every female in my life cannot stand the first Tron movie at all if over the age of ten!  So, now you understand that my expectations, personally, were low when visiting the ElecTRONica experience at Disney California Adventure at the Disneyland Resort in Anaheim California.  I was prepared to simply hate it.

The Tron experience begins in the Hollywood Pictures Backlot with a Tron themed stage placed between the Disney Animation building and Disney Junior: Live on Stage.  Guests stand on the street as music plays and an emcee (modeled after Caster, the proprietor of the End of Line Club), introduces dancers in Tron inspired suits along with video clips from the movie.  The music is loud and contagious as the crowd grows in the street.  At one point, I can hear the music within the Disney Animation building and it is impossible to escape if you are anywhere in the Backlot area in the evening. 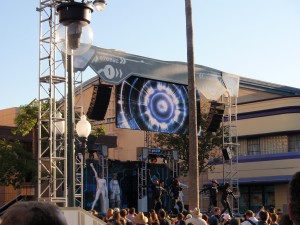 At around 8 p.m. the grid opens.  Guests walk underneath an arch designed to look like a Recognizer from the movies.  Even not being a Tron fan, I still enjoyed hearing the Recognizer talk to me as I walked under its watchful eye.  The area in front of Monsters Inc. becomes a large dance floor around a DJ dressed in Tron inspired robes.  Dancers take mini-stages and dance separately.  The music is modern dance, heavy on dance and techno sounds.  There are Daft Punk tracks from the Tron Legacy soundtrack worked in, and let’s be honest, the soundtrack is one of the best things about Tron Legacy.  The crowd clearly loves this atmosphere as they form a giant mob of nerdy dancing.  Smiles are everywhere.  Disney has provided assistants, or sirens, who lead kids in dancing and provide lighted hula hoops for use to the music. 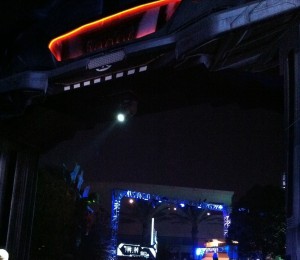 The Recognizer Guards the Grid 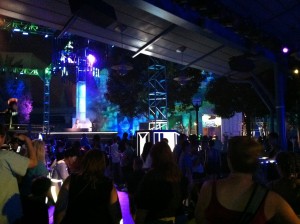 During this time, Muppet*Vision 3D is closed to show a 3D preview of Tron Legacy.  We do not bother with this presentation; most of us have already seen the movie, so a preview is unnecessary.  It would be  a nice touch if they could replace this film with an alternative 3D film, or just keep Muppet*Vision  3D open during  ElecTRONica.  I would welcome a preview of the forthcoming Muppet movie, even if not in 3D.

The best feature on the grid is the show, LASERMAN: R3CONF1GUR3D.  Laserman twice nightly manipulates laser beams to the music of Tron Legacy.  Laserman is a clear crowd favorite, as all the action turns to his performance on his small stage.  He bends, grabs, dances and generally astounds, as one asks, How does he do that? Seriously, he is just one man on a platform manipulating lasers and yet it is fully entertaining.  We stand front and center and even my non-nerdy companions really enjoy his show.  A trip to ElecTRONica is not complete without pausing to catch Laserman.

At the edge of the grid is the End of Line Club.  Here, one can sit in large, deep, stylized couches and enjoy their beverage.  At the bar itself, one can purchase alcoholic beverages, in glowing glasses or decorated with glow cubes – Disney California Adventure is not dry, unlike the Disneyland Park.  We choose lemonade in a glowing ElecTRONica sports sipper bottle.  The bottle, which honest to goodness glows, is a better treat than the lemonade which tastes a little flat to me.

For me, one of the highlights is Flynn’s, a working arcade next to the grid.  Games are paid for with stylized Flynn tokens.  Surprisingly, each game only takes one token to play; in fact, the tokens make a great low cost souvenir of the ElecTRONica experience.  The games are old school arcade style and include Tron and Space Paranoids from the Tron movies.  I play Zaxxon and Buck Rodgers just like when I was kid.  But, I have to admit, I do not do well on these games.  It’s been a long time since I have played any of these games so I die really quickly.  I do better with the free video game stations in front of Flynn’s, which allow guests to play “modern” Tron games for Wii, Playstation and other gaming systems.   Honestly, these have controls I am more familiar with versus the games of my childhood. 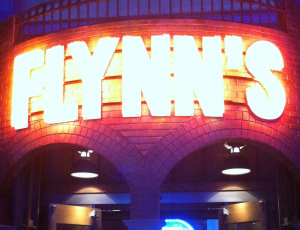 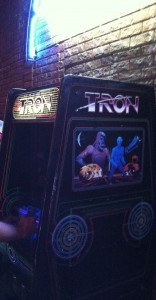 The Most Popular Machine at Flynn's: Tron

In the end, the Tron concept works for me much better as an experience than a movie.  I felt like I was somewhere else as I drank my futuristic drink, watched futuristic entertainment and listened to futuristic inspired Daft Punk music.  I had a ton of fun and clearly the guests around me did too; although, one of my female companions questioned the sanity of watching synchronized Frisbee dancing!

Currently, you can experience ElecTRONica at Disney California Adventure until at least Spring 2012.  But, beyond that, there’s no way of knowing, as it has been rightfully extended more than once.  Even if you didn’t like Tron Legacy, there is a decent chance you really enjoy taking in ElecTRONica.

5 comments on “ElecTRONica: Enter the Grid”